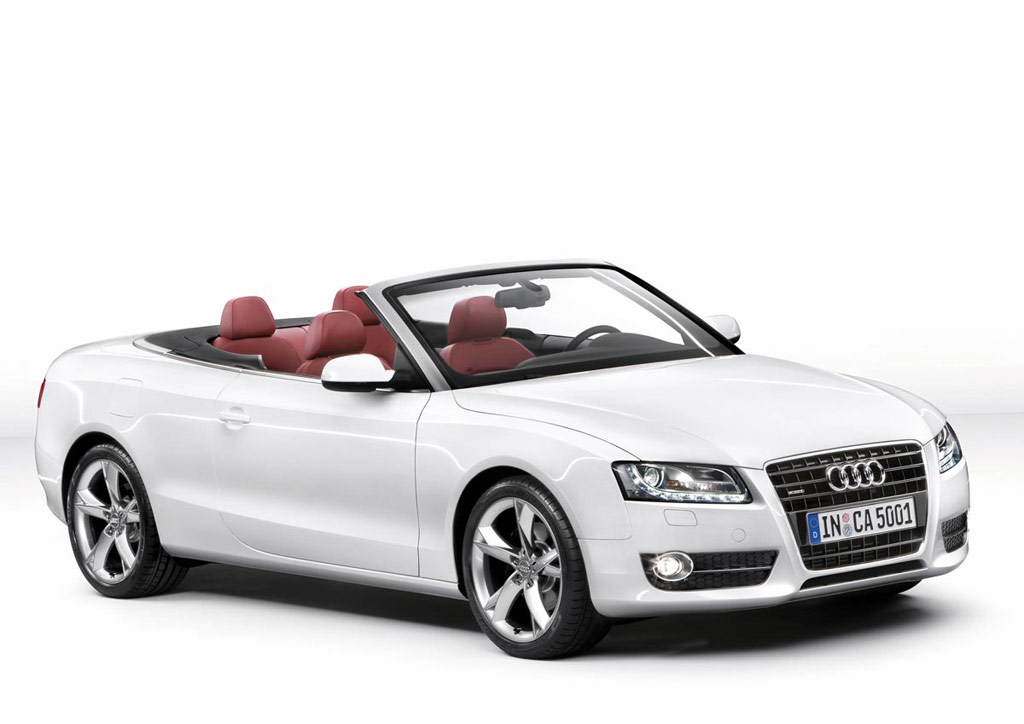 The Audi A5 with a sunnier disposition – the new A5 Cabriolet – is set to make its UK debut next spring, and will be closely followed by a new S5 Cabriolet flagship. Priced from just under £30,000, and available to order from February, the striking four-seat A5 soft-top range capitalizes on the space maximizing extended wheelbase length and state-of-the art engines, transmissions and chassis configuration that have secured success for the A5 Coupé.

Chosen in preference to heavy and complex folding metal roof systems, the lightweight soft-top in the new A5 Cabriolet features a heated glass rear window, and in just 15 seconds retracts into a compartment within the boot that automatically lowers to accommodate it. Equally importantly under UK skies, it also raises again in only 17 seconds, and can complete both operations at speeds of up to 31mph. When in place the three-layer roof very effectively insulates occupants from external noise, and for optimum refinement an optional acoustic hood is also available to reduce sound intrusion to virtually the same level as the A5 Coupe.

Roof up or down, the A5 Cabriolet makes light work of transporting up to four adults in comfort thanks to its extended wheelbase, which helps to maximize cabin space. When the soft top is in place, a best-in-class luggage capacity of 380 litres also enables easy accommodation of luggage for four, and in topless mode the roof stowage compartment only marginally reduces this impressive total to 320 litres. Thanks to the standard split/folding rear seat back a maximum capacity of 750 litres can be accessed if required.

With the roof stowed and the wind deflector in place, front seat occupants make impressively buffet-free progress, and for the last word in topless refinement can be cosseted by new options such as a neck-level heating system built into the tops of the seat backs for cooler days and solar heat-reflecting leather upholstery that keeps seat surfaces cooler in direct sunlight.

Three engines at UK launch
In the UK the A5 Cabriolet will launch with a choice of three directly injected engines – the latest turbo charged 2.0-litre TFSI petrol in 211PS form, the 3.2-litre naturally aspirated V6 FSI petrol with 265PS and the 3.0-litre V6 TDI with 240PS. 2.0-litre TFSI and 3.2-litre FSI units are initially offered in conjunction with front-wheel-drive, while the 3.0-litre TDI is linked exclusively to the latest generation quattro four-wheel-drive system with 40% / 60% front-to-rear torque distribution.

A six-speed manual transmission carries engine power to the wheels in 2.0 TFSI models, while 3.2 FSI and 3.0 TDI versions feature two ultra-efficient automatics – the multitronic continuously variable transmission in the 3.2 FSI and the new seven speed S tronic twin-clutch gearbox, developed specifically for longitudinal ‘north-south’ engine installations, in the 3.0 TDI quattro. This all-new transmission will also be a standard feature of the S5 Cabriolet.

Further engine variants and additional quattro models will be phased in during 2009, and the automatic transmission options will also become more widely available.

Thanks to the optimum weight distribution made possible by the all-new chassis with repositioned front axle, the A5 Cabriolet applies its power to the road with suitable polish. Its inherent composure and agility can be felt even more keenly in the quattro models, and especially in the S5 when its four-wheel-drive system has been enhanced by the new optional quattro sports differential. Fresh from its recent debut in the latest S4, the new sports differential will initially be available at extra cost for the S5 Cabriolet but will filter into the A5 Cabriolet quattro range in due course.

Wheel-to-wheel torque transfer
The new differential technology enables the quattro system to not only transfer torque between the front and rear axles to counter traction losses, but also between the rear wheels. When the steering wheel is turned or the car accelerated in a corner, power is redirected in a controlled manner to the outer rear wheel, literally pushing the car through the corner. The driver benefits from reduced steering effort and a feeling of even greater adjustability and control.

The upgrade from ‘standard’ quattro to quattro with active sport differential is available at extra cost as an element of the optional Audi drive select adaptive dynamics system. Audi drive select enables the driver to fine-tune throttle response, steering assistance and transmission shift points (where S tronic is fitted) via dashboard-mounted buttons to suit personal preferences or prevailing road conditions.

A5 Cabriolet customers will be able to equip their cars to Standard, SE or S line specification, all options including fully automatic powered soft-top operation, alloy wheels and climate control. SE models add luxuries such as full leather upholstery, and on top of this S line specification makes the most of the sharply sculpted lines of the A5 through exclusive grille and bumper treatments and larger 18-inch alloy wheels. Xenon headlamps with LED daytime running lights, LED rear lights and the acoustic hood upgrade incorporating in-built LED rear reading lights are also part of the S line package.