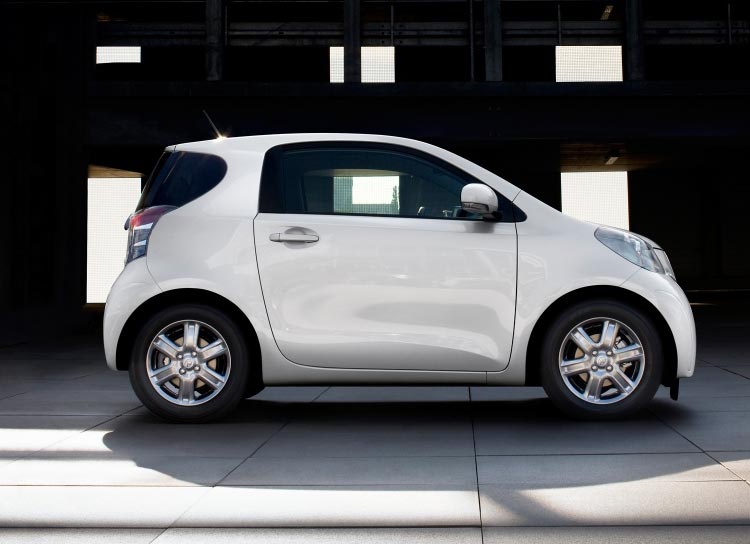 It is a common assumption that the smaller the car, the more vulnerable driver and passengers are in an accident. The new Toyota iQ – the world’s smallest four-seat production model – is proof this need not be the case, providing an unprecedented level of active and passive safety protection for an A-segment model.

From its basic framework to a 360-degree array of airbags, iQ goes further than any car in its class to ensure the safety of everyone on board should an accident happen. More than that, there is a full package of advanced braking and handling systems that help the driver maintain control of the car in difficult conditions, features that until now have been reserved for much larger models from the B/C segments and above.

Active Safety
iQ is equipped with a formidable range of braking and handling systems that give the driver more chance of avoiding an accident happening.

ABS is supported by Electronic Brakeforce Distribution (EBD) and Brake Assist (BA), which ensure maximum performance under emergency braking. By preventing the wheels from locking under braking, EBD also helps maintain stability when cornering and braking.

Steering Assist Vehicle Stability Control (VSC+) prevents loss of control in hazardous situations, for example when entering a corner too fast, or encountering slippery conditions that could provoke a skid. Sensors monitoring vital performance data around the car determine whether the driver is about to lose control and automatically triggers stability and safety systems, including adjustment of steering torque to help the driver make the correct turn of the wheel to keep the car on course.

Traction Control (TRC) is also provided as standard, automatically adjusting power delivery to individual wheels when any loss of traction is detected to maintain grip, for example when driving on wet or uneven surfaces.

Passive Safety
The protection cell around the cabin is a critical engineering feature of any car. For the new iQ, engineers developed a new protection system based on Toyota’s innovative multi-load path body structure. This provides six key countermeasures to mitigate the effects of any impact.

In the cabin there are nine airbags, designed specifically to complement the size and shape of the interior, providing 360-degree protection.

They include a driver’s knee airbag, which, as it is closer to the driver than on other models, is smaller and deploys quicker. The front passenger front airbag uses a dual-chamber design first seen on Lexus models, which has the effect of cradling the passenger’s face while the force from inflation is spread across the shoulders. iQ also features Toyota’s first seat cushion airbag, fitted to the front passenger seat. This inflates under the thighs to help hold the body in place, maximising the protection given by the front and side airbags.

Front and rear side airbags are fitted, with separate sections that provide different levels of pressure appropriate for protecting the pelvis and chest areas.

Euro NCAP
In spite of its diminutive dimensions, iQ has been designed with a view to achieving class-leading safety performance in full-frontal, offset, side and rear collisions, aided by its new, highly rigid platform and robust safety structure. The car is intended to meet the maximum five-star standard for adult occupant protection in Euro NCAP crash testing and a three-star rating for pedestrian protection. In this last regard, the shape and height of the bonnet and a collapsible cowl construction help reduce potential pedestrian injury.