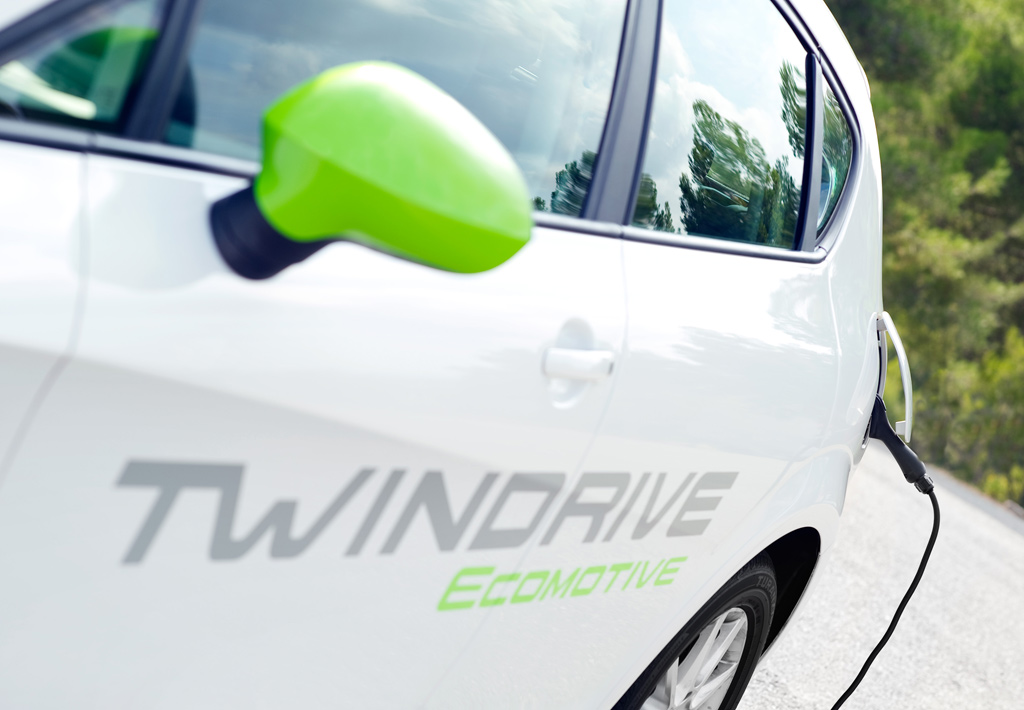 SEAT has today announced it is working on its first electric car designed, developed and manufactured in Spain. And, as well as unveiling the prototype Altea XL Electric Ecomotive, a totally electrically-driven zero-emissions car, the Spanish manufacturer also presented the prototype Leon TwinDrive Ecomotive, a plug-in hybrid.

Over the next few months SEAT will make available units of both models to governmental institutions in Catalonia and Madrid for use in their vehicle fleets. This will provide SEAT with valuable information on use of the cars for assessment with a view to mass production of electric vehicles in the medium-term. The company envisages the launch of its first electric plug-in hybrid car in 2015, to be followed a year later by an all-electric car.

SEAT’s strategy is to commit to a wide range of alternative technologies. To this end the Spanish manufacturer is unveiling two different but complementary models at the same time.

“Customers demand a more sustainable form of mobility, but their needs are diverse. Therefore, we believe that a parallel strategy of developing two different technologies will put SEAT in the best position to meet their needs”.

The announcement of the launch of the first electric vehicles coincides with the start of the biggest new product offensive SEAT has known. The company will be launching four new models onto the marketplace over the forthcoming twelve months. The first will be SEAT’s new urban vehicle – the Mii.

Electromobility, a team effort
The future of electromobility in Spain depends not only on vehicles but also their components such as batteries, as well as a recharging infrastructure. For this reason SEAT – the number one industrial investor in R&D in Spain – is heading the CENIT VERDE project. This public-private-partnership between manufacturers, universities, research centres and the Spanish Ministry of Science and Innovation is taking a holistic research approach to making the electric vehicle a reality in Spain.

The Altea XL Electric Ecomotive, SEAT’s first electric car
The Altea XL Electric Ecomotive blazes the trail for electromobility in Spain. It has a range of 135 kilometres and as with all its vehicles, SEAT guarantees driving pleasure with an engine producing 115 hp (85kW) and 270 Nm of torque. This amount of power translates into a limited top speed of 135 kph. With its roomy passenger compartment and generous boot, the electric Altea XL is equally suitable for family or transport company use.

By intelligent location of the batteries under the rear seats and the boot, there is no intrusion on the passenger compartment. A sophisticated regeneration system with adjustable braking torque optimises energy use. And when the electric Altea XL is parked in the sun, the rooftop photovoltaic cells recirculates fresh air inside the passenger compartment reducing the energy needed afterwards by the climatic system.

Dr. Matthias Rabe, executive Vice-president for R&D, has stated that

Leon TwinDrive, an all-purpose car
The new SEAT Leon TwinDrive Ecomotive is a ground-breaking concept in the field of plug-in hybrids, by combining the advantaged of emission-free driving with the range of a traditional internal combustion engine vehicle. In electric mode the TwinDrive has a range of 52 kilometres, with a top speed of 120 kph. In combined mode (electrical plus combustion) the consumption forecast is only 1.7 litres of fuel or 18.5 kWh per 100 kms, the equivalent of a rock-bottom 39 g/km of CO2, with a top speed of 170 kph.

In the words of Dr. Matthias Rabe, SEAT executive Vice-president for R&D “the Leon TwinDrive Ecomotive is an exciting and ground-breaking solution. Technically, it allows you to drive in all-electric mode, while at the same time enjoying smart hybrid drive”. To which he adds “Thanks to its great range, none of our customers will need to change their lifestyle or transport habits”.

The Ecomotive family, low-emission mobility
The Altea XL Electric Ecomotive and Leon TwinDrive Ecomotive do not constitute SEAT’s first venture into the field of sustainable mobility and commitment to environmental protection. The Spanish brand has a long track record in the manufacture of low-emission vehicles. More than 60% of vehicles marketed in Spain by SEAT have emission levels below 130 g/km of CO2.

The star of the range is the Ibiza Ecomotive, with a combined consumption of just 3.4 litres and emissions of no more than 89 g/km from its 75 hp (55 kW) engine. Additionally, SEAT continues to broaden the Ecomotive range by adding versions of the Leon, Altea, Altea XL, Alhambra and SEAT’s new urban car the Mii, with equally benchmark consumption figures.