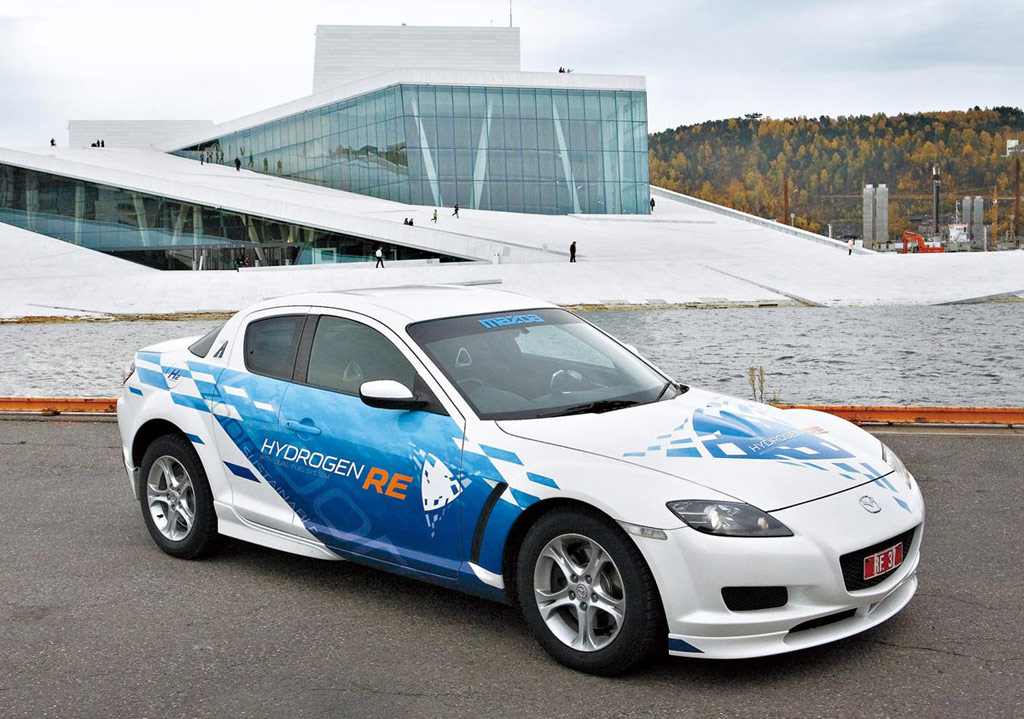 Mazda Motor Corporation announced today that is has introduced the Mazda RX-8 Hydrogen RE (Rotary Engine) vehicle to Norway’s public roads in collaboration with the Hydrogen Road of Norway, (HyNor) project. Initially, the RX-8 Hydrogen RE’s driving performance on Norwegian roads will be validated with a single vehicle, which will also be shown at various events. This marks the first time that a Mazda hydrogen rotary vehicle has been put into regular use on public roads outside Japan.

Mazda signed a memorandum of understanding with HyNor to participate in the project in November 2007. HyNor is a national project in the Kingdom of Norway that aims to establish a clean energy transport system based on hydrogen fuel. Beginning in fiscal year 2009, Mazda will provide approximately 30 RX-8 Hydrogen RE vehicles for the HyNor project under commercial lease contracts.

The RX-8 Hydrogen RE validation vehicle is being delivered in advance so that Mazda and HyNor can jointly assess its driving performance in Norway. It will also be exhibited at environmental and other events for potential customers who are interested in leasing a hydrogen vehicle.

“Up to now, real world use of Mazda’s hydrogen rotary vehicles has been limited to Japan. Participation in the HyNor project marks our advancement to the next stage,” says Akihiro Kashiwagi, Mazda Program Manager in charge of hydrogen RE development. “After we validate the first vehicle on Norwegian roads, we intend to deliver 30 more units under commercial lease contracts. We are pleased to be a part of the establishment of a society based on hydrogen energy in Norway. Mazda plans to use the wealth of data and experience that will result from this project for the further development of hydrogen vehicles.”

HyNor is a unique Norwegian initiative to demonstrate the implementation of a hydrogen energy infrastructure along a 580 km route from Oslo to Stavanger in Norway. Hydrogen filling stations are being established along this transport corridor to enable refuelling of hydrogen vehicles. The project aims to revolutionize transportation in Norway by encompassing buses, taxis and private cars, and varying types of transport systems, including urban, inter-city, regional and even long-distance transport. In August 2006, Mazda attended the ceremony to commemorate the opening of Norway’s first hydrogen filling station constructed by HyNor. This was also where the first on-road demonstration of a RX-8 Hydrogen RE vehicle outside of Japan took place. Since April 2006, Mazda has delivered eight RX-8 Hydrogen RE vehicles to government bodies and enterprises in Japan under commercial lease contracts.