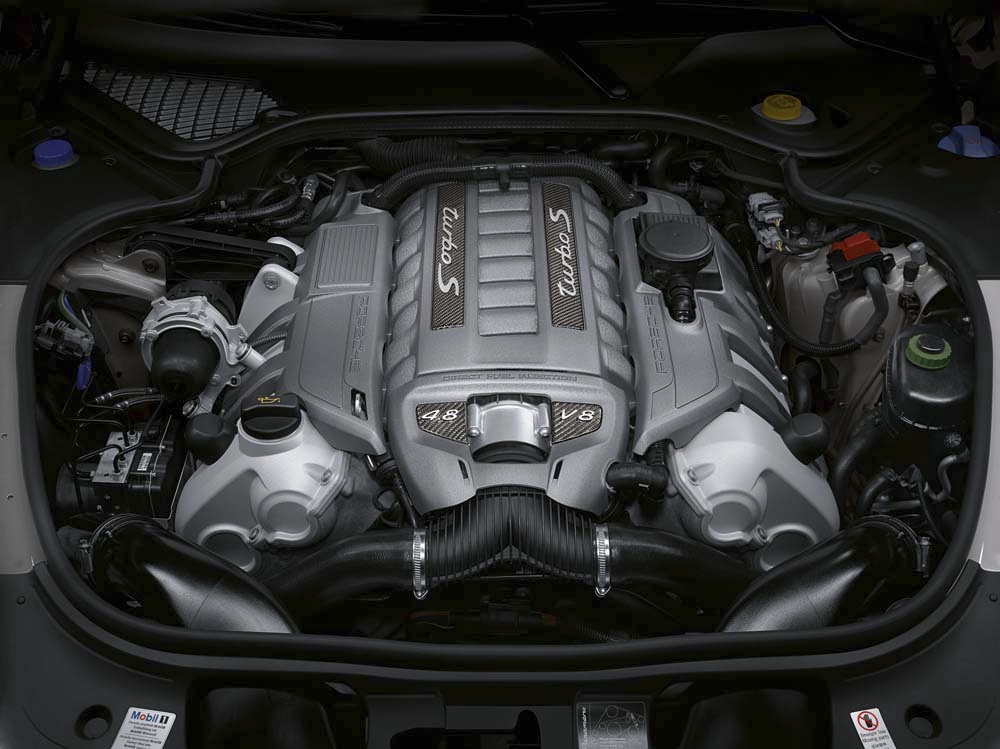 With its new top model in the Gran Turismo model line, Dr. Ing. h.c. F. Porsche AG, Stuttgart, is raising the bar for sporty four-door cars in the luxury class by yet another notch. The new Panamera Turbo S is a unique combination of performance and efficiency, driving dynamics and comfort. The 4.8 litre, V8 biturbo charged engine delivers 550 hp (410 kW), ten percent or 50 hp (37 kW) more than the already very powerful engine in the Panamera Turbo. By the same token, the torque also increases from 700 to 750 Nm. In the “Sport” and “Sport Plus” mode of the standard Sport Chrono Package Turbo and during kick-down in normal mode, the eight cylinder engine delivers fully 800 Nm with the so-called overboost function.

The power pack is behind the new top-of-the-range Panamera’s record sprint times. Thanks to Launch Control, 100 km/h (62 mph) is reached in 3.8 seconds; the top speed is 306 km/h (191 mph). Despite the increased performance, fuel consumption remains at the moderate level of the Panamera Turbo – yet another example of “Porsche Intelligent Performance”. In the NEDC the Gran Turismo covers 100 kilometres (62 miles) on 11.5 litres of fuel. Fuel consumption falls to 11.3 litres per 100 km (25 mpg imp.) when fitted with the 19 inch, all-season tyres with optimised rolling resistance developed for the Panamera by Michelin.

The increased performance compared with the Panamera Turbo can be attributed to two main enhancements: Improved turbochargers with titanium-aluminium turbine wheels and modified engine control. The use of the innovative titanium-aluminium alloy reduces the weight of the turbine and compressor wheel. This results in a lower moment of inertia and thus in improved and more agile engine responsiveness.

Even for a top luxury class model, Porsche’s new top-of-the-range Panamera boasts an extraordinarily comprehensive equipment level. In keeping with the sporty concept of the high-performance Panamera, it features the most important driving dynamics control systems as standard. For example, Porsche Dynamic Chassis Control (PDCC), an active roll stabilisation system, nips in the bud the vehicle’s tendency to lean when cornering, thus enhancing agility and comfort in equal measure. Porsche Torque Vectoring Plus (PTV Plus) applies a variable torque split to the rear wheels combined with an electronically controlled rear differential lock, thus ensuring superior traction and therefore greater agility in every driving situation. The steering system uses the speed-dependent Servotronic. The Sport Chrono Package Turbo, which tunes the suspension and power unit, making them even sportier by pressing the additional “Sport Plus” button, is also fitted as standard, as is the sports exhaust system for an even more emotional engine sound.

The sporty character of the new Panamera Turbo S is apparent not just in its performance but is also reflected on the exterior. The 20-inch Turbo II wheels with increased rear axle track width, side skirts from the Porsche Exclusive range and the adaptive extending four-way rear spoiler in the exterior colour ensure particularly sporty performance and look. The fusion of exclusivity and sportiness is conveyed in the interior by the bi-colour leather finish, fitted as standard. The new combination of black/cream is offered exclusively for the new Panamera Turbo S with agate grey/cream also being added as an exclusive combination from the autumn.