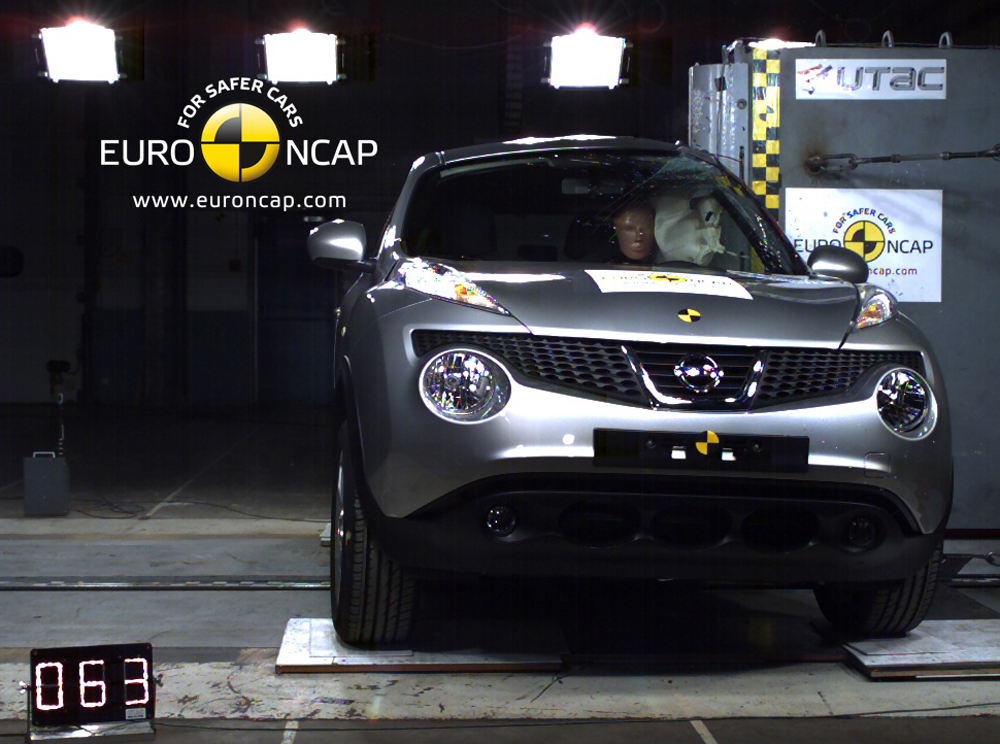 From a standing start in September 2010, the innovative and distinctively styled Juke has accelerated to 32,000 sales across Europe, claiming almost 2 per cent of the B-segment along the way. With almost one in four new cars in Europe coming from the B-segment, Juke’s achievement is all the more important for Nissan’s continued growth. Its initial sales success will be further boosted by a strong performance in the latest Euro NCAP tests, where Juke was given a five star rating.

A testament to Juke’s design and engineering integrity, overall quality and high levels of standard safety equipment, Juke scored an 87 per cent adult protection rating and 81 per cent for child occupant protection with maximum points for its protection of the dummy representing a three-year-old child.

The stability of the passenger compartment in the front impact also contributed to Juke’s rating as did its performance in child pedestrian protection. Standard safety equipment on all Juke models includes ESP stability control and six airbags.

In developing Juke, Nissan has created a new market segment: the small crossover. And like the hugely popular QASHQAI before it, Juke has shown that Nissan’s ability to combine innovation and excitement in its models has captured the car buying public’s imagination by bringing something new and exciting to market.

“Nissan dares to be different. When the QASHQAI crossover arrived four years ago, it shook the establishment by offering an exciting alternative to the conventional hatchback… and customers flocked to Nissan showrooms in their droves. Now its younger brother, Juke, is repeating that success,” said Simon Thomas, Senior Vice President, Sales and Marketing, Nissan International SA.

From the 32,000 sales already achieved, the biggest markets so far are the UK, France and Italy. Like QASHQAI before it, Juke is bringing new customers to the Nissan brand with some 80 per cent being conquest sales.

An unusually high proportion of these sales – some 35 per cent – have been of the top Tekna grade model showing that Nissan can compete on equal terms with premium brands in the B segment. In the last four months of the year, Juke outsold cars like the Alfa Romeo Mito and Mini Countryman and was right behind the Audi A1 and Citroen DS3.

“The interest in Juke is so strong, so positive, that we are confident of achieving 120,000 sales in its first full year,” said Thomas, adding: “Audi and Mini had better watch out!”

Despite production starting only midway through 2010, by the end of the year more than 44,000 Juke models had been built at Nissan’s Sunderland plant in the UK. It helped the factory to its record annual total production figure of 423,262 units. Now in its 25th year of operation, the Sunderland plant built its six millionth car on January 18 – a Force Red Nissan Juke.

Five versions of Juke are available, four petrol and one diesel, all with the one five-door body style that blends SUV toughness with coupé style. Power outputs range from 81kW (110PS) to 140kW (190PS) with manual or XTRONIC CVT transmission, 2WD or 4WD options.

At the top of the range is a four-wheel drive version powered by an all-new turbocharged 1.6-litre petrol engine with direct injection. It uses the latest generation ALL-MODE 4x4i with torque vectoring for enhanced agility and reduced understeer when cornering.

On higher grades, equipment can include full climate control, a rear-view parking camera, Nissan Connect satellite navigation and, a new development, the Nissan Dynamic Control System which gives the driver the
option to optimise the car’s dynamic performance through a sports and eco mode.