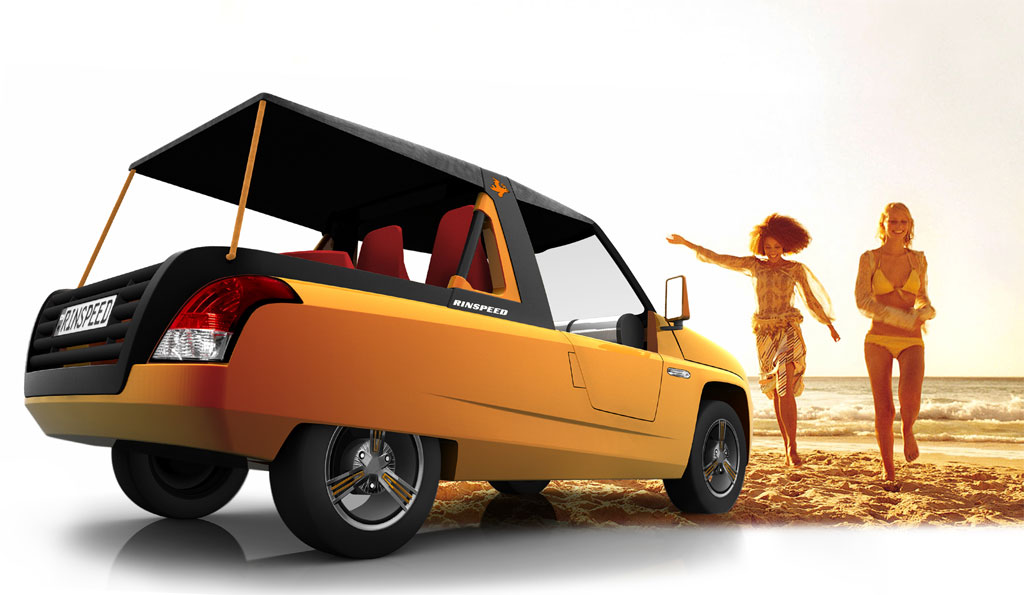 This car irritates. Could be that it’s the ingenious crafted creations of world-renowned New York pop artist James Rizzi. In any case, Frank M. Rinderknecht‘s latest work “BamBoo” lets the sun rise over the over-engineered metal creatures at the Geneva Motor Show, whose single purpose is to never touch anything other than black asphalt. Yes, this is a taste of summer. A taste of beach and sand, of the lightness and lightheartedness of southern latitudes. It is a reminiscence of the Seventies, of the south of France, of St. Tropez. Its colors range from salmon to lobster and yellow, shimmering in the sunlight, staged perfectly by color- and adhesive-repair-specialist (“StickerFix”) AkzoNobel. And one would expect to find Brigitte Bardot behind the wheel with playboy Gunther Sachs at her side heading towards Tahiti beach. But at the same time this car points to the future with clever innovations such as a communication display in place of a radiator grille and an inflatable roof that also serves as a beach blanket. Yes, this sun & fun car will blow the roof off!

Anyone who might think that this is simple retro design underestimates the boss of the Swiss concept powerhouse. He reinterprets the automotive references of days gone by and evolves them into the future. He plays with man’s yearning to get back to the roots, often paired with the desire to be in harmony with creation. That makes electric drive, also for the onboard foldable two wheeler for the last “mile”, a must. More than just about anyone the Rinspeed boss knows how to play on strong emotions and dreams beyond the macho horsepower affectation. This is the fundamental reason why Rinderknecht is considered an automotive visionary by many.

The latest creation from Rinderknecht – jointly developed and built by Swiss engineering firms 4erC and Esoro – resembles a grown-up golf cart at first glance. But one that offers a firework of innovation and design. This successful combination is most evident in the canopy-like inflatable roof developed by Swiss company Tecnotex. It is covered with water-resistant „Skai Neptun Caleri“ with nano coating supplied by the Hornschuch Company. It protects the interior against possible morning dew. Nothing but air lends the two-piece waterproof design its rigidity. While the outside of the roof is decorated by a giant Rizzi beach scene, the inside is refined by visionary spinning mill Schoeller from Bregenz with thread made from genuine bamboo. No doubt, anyone going to the beach with this mattress will easily outshine any folding convertible roof, no matter how elegant and will instantly be in conversation with their beach chair neighbors.

In any case, “Bamboo” is the fitting sun & fun car for the extroverted communicator. Personal messages for the people in the vicinity of the car are displayed on the innovative “Identiface.” This screen-based section, developed by Daimler subsidiary MBtech in Stuttgart, replaces the radiator grille, which is mostly redundant on an electric vehicle anyways. Thanks to its Internet connectivity “Identiface” can display the occupants’ Facebook pages, news from around the world, the manufacturer’s logo or an offer for a ride from A to B. Engineering service provider Helveting with support from Zurich Versicherung custom-developed the “BamBoo-Community” platform. This platform also offers additional practical features centered on social networking, sustainability and optimal driving behavior. In combination with the famous color-changing “Rizzi bird“ on the rollover bar (green = I am single; blue = I am in party mood; orange = I need a break) it creates an entirely new automotive form of communication beyond deafening noise attacks. “Rizzi bird“ instead of flipping the bird.

Simple but highly refined is the interior of the “BamBoo.” It’s all in a name: The sides of the Bordeaux-red bench are decorated with the “BamBoo“ logo and the “Rizzi bird,” artfully woven with bamboo thread by Zurich weaver Weisbrod. The center seating surfaces are decorated with Rizzi drawings, and are made from breathable high performance synthetik „Laif“ material. And both rear seats are inflatable and stored in two aluminum cases on the open cargo bed. You guessed it – they too can be taken to the beach.

The puristic dashboard is in the shape of a giant breadbox – and the fine cover made from braided plastics supplied by polymer manufacturer Ticona – opens in breadbox fashion to reveal the control elements and the futuristic VDO display. The far right of the glove box houses a seven-inch HTC tablet PC “Flyer” with docking station. In keeping with the times the tablet PC and the occupants’ smartphones guarantee that the “BamBoo” and its passengers are always connected everywhere. The elongated “bread bin” is flanked by Harman JBL GreenEdge speakers in an avant-garde design. The world’s leading provider of premium sound and infotainment systems is focusing on connectivity with its scalable entertainment system and the “Aha Radio” application. And in the center thrones the vent of the electric high-voltage heater from German supplier Eberspächer catem. By the way the “BamBoo” is started with an army knife. Typically Swiss.

With all this nicely packaged lifestyle the underlying technical specifications of the “BamBoo” are easily overlooked: The four four-seater features an electric motor from the German Fräger Group (German e-Cars) with 54 kW of power. This high-torque motor “made in Germany” accelerates the 1,090-kilogram vehicle to a top speed of 120 km/h. Lightweight construction does its part: The steel chassis with horizontal shock absorbers carries a sturdy composite body combined with the use of polymer plastic materials. Henkel supplies the structural foams as well as sealants and adhesives. The entire thing sits on 17” AEZ three-spoke billet aluminum wheels with painted inserts and eco-friendly Goodyear “EfficientGrip” energy-saving tires in 17”. And the operating range? The battery’s capacity is enough for 105 kilometers – plenty for a fun car for short-distance traffic between hotel, beach and restaurant visits in the evenings. Speaking of range: Rinderknecht has also partnered with energy giant RWE, whose “intelligent” charging station demonstrates how an innovative infrastructure specialist tackles the issue of e-mobility. The advanced charger communicates with the car across all borders.

And what effect will “BamBoo” have in Geneva? “BamBoo” will push the reset button in the head of the observer, clearing the mind for a new way of automotive thinking. It exhibits simple, crisp lines; nothing is redundant – aesthetics in their purest form. Close your eyes and you’ll find yourself cruising through pine forests and lavender fields in your mind. The little car was made for the beautiful beaches and vacation spots of this planet, making the “BamBoo” sort of a world car. No wonder that bustling Frank M. Rinderknecht wants to seize this chance as figurehead of Swiss watch manufacturer C.F. Bucherer and thinks aloud about a series production. Rinderknecht will only say this: “Yes, there have been constructive talks for some time with a number of potential manufacturers.” To be on the safe side, the Düsseldorf consulting firm A.T. Kearney already has manufacturing and company concepts for a series production in the drawer.

At the Geneva Motor Show even visions have to be communicated visually in top quality with HD displays and Blu-ray players from Sharp and advertising support from “Die Agentur” based in Germany’s federal state of Saarland.