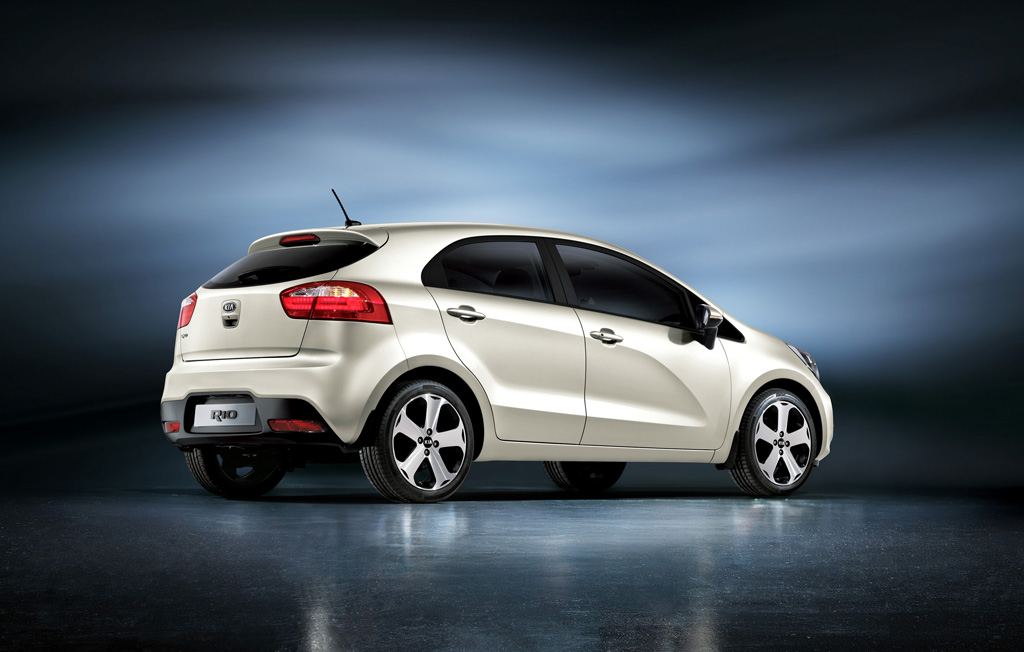 Kia Motors Corporation has today revealed the first official photos of the forthcoming next generation Rio, which boasts a bold and distinctive personality, bringing the newcomer in line with the rest of Kia’s striking design-led model range.

Tasked with the difficult job of improving upon the remarkable international sales success of the previous generation model, the new Kia Rio will be available in three body styles (with 3-, 4- or 5-doors, depending on market), and has been designed to appeal to customers all around the world.

New Rio has its own interpretation of Kia’s signature grille, integrated with the headlamps to give a new twist on the Kia family look. In profile, the body to glass ratio and its strong wedge form give new Rio a dynamic sporty stance. The balance of the window graphic, wheelbase and overall proportions generates a ‘premium presence’ which is rare in this segment. Overall, new Rio combines European finesse with Korean spice to create a form language that communicates Latin flair.

The new model features a wheelbase extended by 70 mm (to 2,570 mm) and promises greater passenger space and comfort, together with increased cargo capacity to 292 liters (hatchback) and 390 liters (sedan). Exterior dimensions changes include: +55 mm (overall length), -15 mm (height) and +25 mm (overall width) to enhance the feeling of sportiness.

Inside, the new model will deliver a high level of quality previously associated with larger models – together with a wide selection of trim options.

Kia’s B-segment newcomer will be manufactured with an extensive range of six fuel-efficient and low-CO2 engines – from a 1.1-liter diesel unit generating 70 ps in Europe, up to a 1.6-liter GDI gasoline engine producing 140 ps for North America – with the powertrain selection tailored to best suit individual markets and local consumer preferences. An all-new, high-performance 1.2-liter Turbo Gasoline Direct Injection (GDI) will also be available in Europe from 2012.

Soon-Nam Lee, Director of Overseas Marketing, Kia Motors Corporation, added: “This new model is a big step forward. The Rio has always been successful, and with this new incarnation we have a car which is extremely attractive, that people will want to buy for its looks.” Since its launch in 2005, global sales of the current-generation Rio have totalled more than 860,000 units. It was the company’s third best-selling vehicle in overseas markets during 2010 with sales of more than 219,000 units.

The world premiere of the new Kia Rio will be celebrated at the Geneva International Motor Show on Tuesday, March 1, 2011 – alongside another all-new product for Kia, the next generation Picanto city car – during its press conference, taking place at 16.15 (CET) on the Kia stand in Hall 6. Also being displayed at Geneva, and making its European debut, is the innovative hybrid version of Kia’s stunning Optima sedan, scheduled to go on sale in the US market later this year.