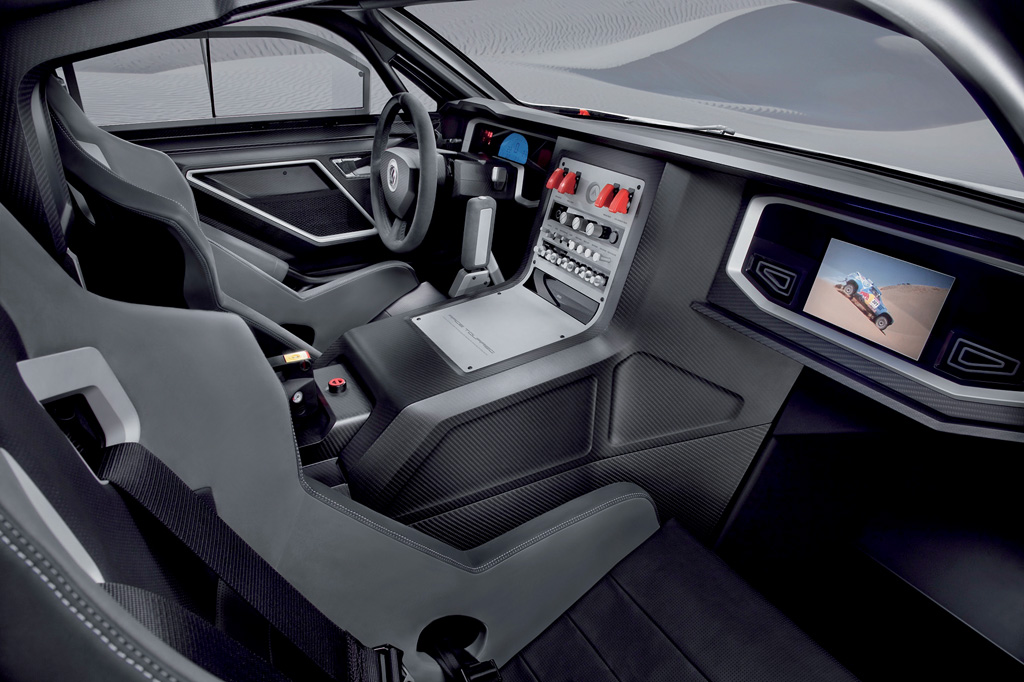 At the first Qatar Motor Show (26 – 29 January), Volkswagen is presenting a slightly tamer version of the Touareg 3 that started in the Dakar Rally at the beginning of January; this 228 kW / 310 PS Volkswagen could very well be the world’s most talented street-legal SUV.

This is a genuine Rally motorsport vehicle, like the one that was still touring South America in the Dakar Rally two weeks ago and was built to withstand the toughest rally race in the world. The vehicle now being shown in Qatar is a version of the Race Touareg 3 – an SUV that can sprint to 100 km/h in less than six seconds – that is legally approved for use on public roadways. The just over two metre wide body was slightly modified for road use. Instead of 16-inch wheels, new 18-inch wheels from BBS with a gold look are being used. The “Race Touareg” signature – also in a golden colour – stretches the entire length of the vehicle’s sides. In turn, it is perfectly coordinated with the exterior paint in “Magic Morning,” a white that has a slight gold shimmer to it.

The interior was completely redesigned; all that remained unmodified was the safety cage. Without compromises also means an interior that offers easy controls and is ergonomic. The interior has an extremely well-organised appearance with focus on the driving machine, and it is equipped with Recaro racing bucket seats. Designers created an interior in so-called “Stealth look” that is reminiscent of the aircraft of the same name. In tribute to the Dakar Rally, the Dakar victories are etched in the anodised aluminium of the centre console, right next to the “Race Touareg” signature.

Other trim elements are treated in Matt Carbon. Tuned to this is the roll cage in “Serpentino Grey Metallic.” Interior designers have upholstered the seat side supports and the door trim panels with Nubuk leather in “Black” and “Pure Grey,” while the centre seat panels are made from perforated Nappa leather in “Titan Black.” Additional accents include the two-tone seams and silver piping on the seat covers and safety-related items painted in “Tornado Red.” The only other ingredient that is needed is some time to explore the world on a “360 degree route” in this uncompromising car.