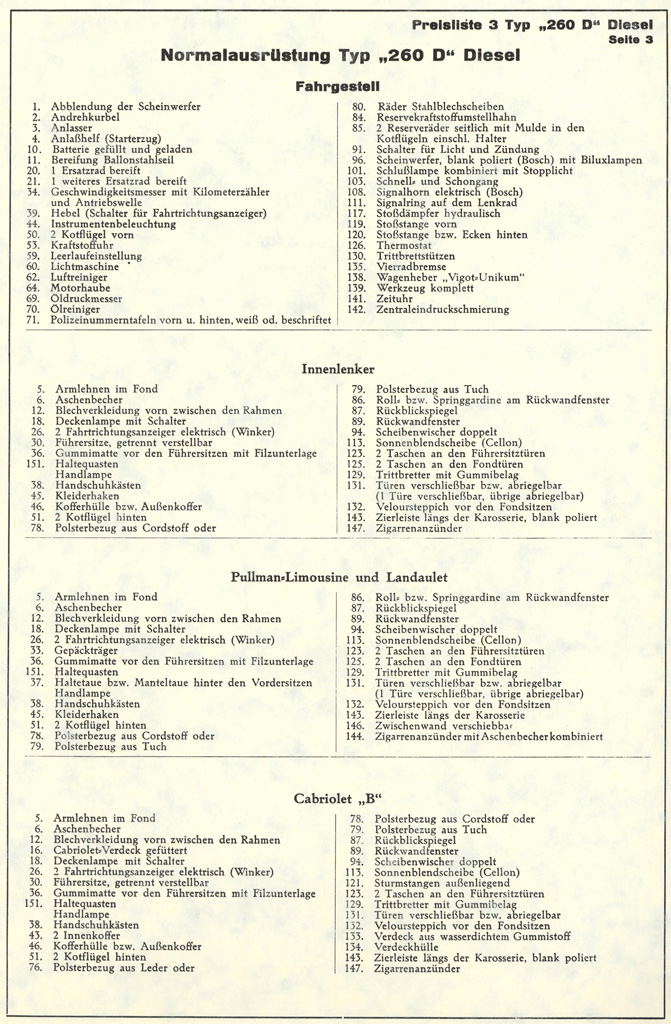 The Mercedes-Benz 260 D in the W 138 series was the world’s first series-production diesel passenger car. In February 1936 – 50 years after the invention of the petrol-powered automobile by Carl Benz – Mercedes-Benz presented this revolutionary vehicle at the International Motorcycle and Automobile Exhibition in Berlin. Its 2.6-litre OM 138 four-cylinder engine with the Mercedes-Benz pre-chamber system and a Bosch injection pump developed 33 kW (45 hp) at 3200 rpm, and was installed in the chassis of the petrol-powered Mercedes-Benz 200 with a long wheelbase. The Bosch Four-plunger injection pump allowed engine speeds of up to 3000 rpm and ensured rapid fuel delivery.

In November 1934, after experimenting with various diesel engines in Mercedes-Benz passenger cars, the engineers opted for a modified version of the well-proven six-cylinder in-line engine from the commercial vehicle sector. The result was a four-cylinder unit with a displacement of 2.6 litres (bore x stroke 90 x 100 millimetres). The new engine adopted the truck engine’s smooth pre-chamber combustion process. The technical specifications included overhead valves and a five-bearing crankshaft.

Series production of the model 260 D commenced at the end of 1935, and the world’s first regular production diesel car was premiered in February 1936, at the International Motorcycle and Automobile Exhibition in Berlin. At an average diesel fuel consumption of 9.5 litres, a tank filling was initially sufficient for 400 kilometres, and this increased to no less than 500 kilometres or more after a model upgrade in 1937. This was not without significance considering the relative scarcity of filling stations at the time.

Even in 1936 the diesel engine in the model 260 D delivered impressive fuel economy: average consumption was slightly above 9 litres of diesel per 100 kilometres, considerably bettering the 13 litres consumed by the petrol-powered model 200. Moreover, diesel fuel cost only 17 Pfennigs per litre for holders of a passenger transport licence in 1936: at the time that was less than half the normal cost of petrol. Taxi-drivers in particular immediately opted for this car, which was available in a spacious Pullman version with six seats right from the start.

In September 1936 Mercedes-Benz also introduced a Pullman saloon, a 4/5-seater saloon and the 4/5-seater Convertible B as further body variants of the model 260 D. Apart from taxi-drivers, more and more private customers also chose this very economical vehicle.

As early as 1937 Mercedes-Benz presented an improved version of the model 260 D: the facelifted version now had a modified radiator grille. The slightly smaller headlamps had more curved housings whose bases were inserted directly into the wings. Previously the headlamps had been mounted on a chrome-plated rail in front of the radiator, which was now omitted. The two 6/7-seater model variants were also given redesigned bodies which were both more spacious and more prestigious-looking than the first Pullman versions. New bumpers replacing the dainty versions of the first two years were introduced in 1938.

In February 1938 the previous overdrive transmission was replaced by a fully synchronised four-speed transmission with a direct-ratio fourth gear. At the same time the 260 D – like the model 230 – was given wider wheels and tyres in the interests of standardisation, as well as dual-action hydraulic shock absorbers at the rear. And from early 1938, electrically heated glow plugs made starting easier when the engine was cold.

From 1936 to 1940 Mercedes-Benz produced 1967 examples of the model 260 D. Especially as a taxi, the world’s first diesel passenger car proved to be an absolute long-distance champion: taxi cabs based on the 260 D were still on the road in large numbers well into the 1950s. Mercedes-Benz also used the OM 138 engine, which underwent only very few modifications during the four-year production period of the model 260 D, for other applications. The same engine also powered the L 1100 to L 1500-series vans built in Stuttgart and Mannheim.

Since the sensational premiere of the model 260 D, Mercedes-Benz passenger cars with diesel engines have continuously set new technical standards. After the Second World War, the model 170 D (W 136) was the first newly designed diesel car offered by Mercedes-Benz. It was powered by the OM 636 1.7-litre four-cylinder engine and presented in 1949. Since then, Mercedes-Benz passenger cars with diesel engines have been a dynamic success story with numerous highlights. These range from the first diesel car with a five-cylinder engine (model 240 D 3.0 in the W 115 series of 1974) to the introduction of CDI technology with common-rail injection in the C 220 CDI of 1997 and BlueTEC emissions control in the E 320 BlueTEC for the American market in 2006, and right up to the development of diesel-hybrid vehicles such as the E 300 BlueTEC HYBRID for model year 2011. The brand is therefore making a decisive contribution towards establishing the diesel engine as an economical, powerful and refined passenger car drive unit with great future potential.