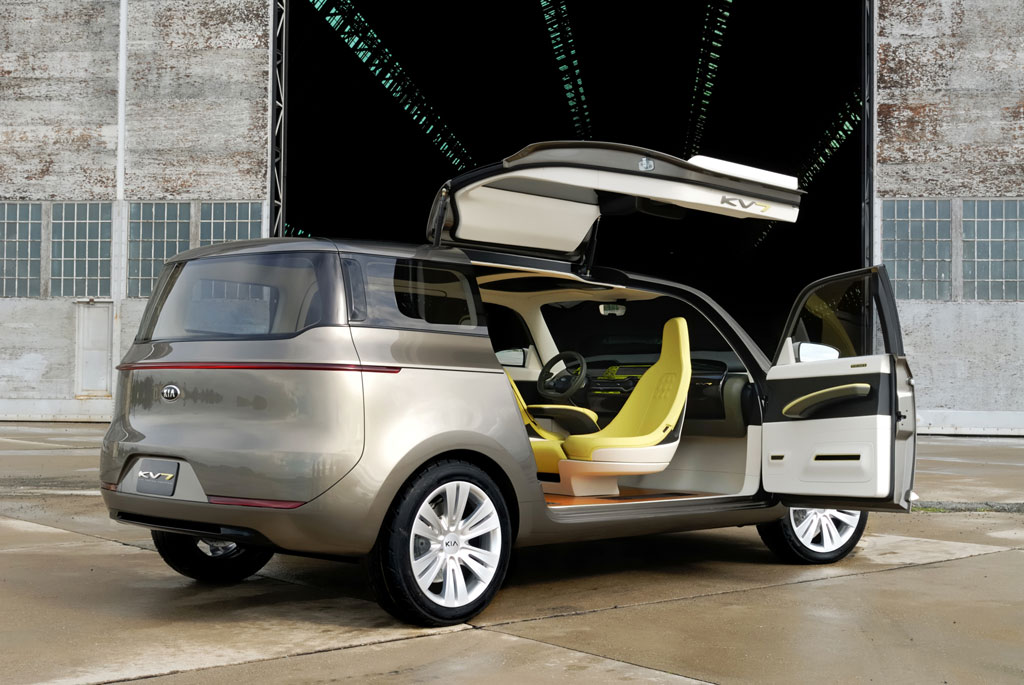 Kia Motors’ design-led transformation has delivered eye-catching vehicles such as the Soul, Forte Koup, Sorento and Sportage that bear strong resemblances to the concept cars that preceded them, and today at the 2011 North American International Auto Show the brand’s U.S. design studio unveiled its latest design statement – the “KV7” concept. Conceived as a modern-day “activity van,” the KV7 concept challenges the notion that vans are strictly for family transportation and reveals a vision for a vehicle with the functionality to transport a large number of people and their belongings while also serving as a connected social hub for groups of friends and adventure-seekers.

The KV7 concept’s design stands in sharp contrast to the dramatically raked windshields and wedge-shaped noses found throughout the van segment, and builds on the philosophy of “embracing the box” established by Kia’s funky Soul urban passenger vehicle to create a unique and alluring design language that brings SUV-like qualities to the segment.

“From the outset, we felt the category was in need of an honest reassessment due to the fact that everyone seems so desperate to attach the word ‘sporty’ to their minivan, even though vans, at their very core are simply a box,” said Tom Kearns, chief designer, Kia Motors America. “Rather than reject the box we chose to celebrate it, just like we did with the Soul, and the result is a straightforward yet sophisticated vehicle that retains the functionality vans are known for and meets the changing and diverse needs of today’s consumers.”

Modern, Confident Exterior
Kia Motors’ design-led transformation has infused emotion and passion into the brand’s lineup of new and recently introduced vehicles, and the inspiration for the KV7 concept was found in the simplicity of elegant box shapes such as sleek smart phones and classic pieces of luggage. The KV7’s wide stance is paired with an A-pillar and windshield design that is more vertical than traditional minivans and its smooth exterior skin and 20-inch wheels exude a modern appearance while projecting the confidence and strength of an SUV.

The KV7 concept’s most striking feature is its passenger-side gullwing door, which creates a massive point-of-entry to the lounge-like interior when opened in conjunction with the pillar-less front passenger door.

The KV7 concept’s inviting face is highlighted by an interpretation of Kia’s signature bold tabbed grille with vertical LED headlamps integrated within the design to create a clean, smooth look. The KV7 features several LED lighting elements that Kia’s design team is evaluating for future production vehicles, including a continuous line of LED fog lights that span the entire front end of the vehicle and directional turn indicators on the outside mirrors and the rear of the vehicle that pulse in the direction being signaled.

The KV7 concept’s distinctive windshield follows the unique designs found on the new Sportage CUV and Optima midsize sedan, and a series of near-continuous windows starting at the A-pillar provide uninterrupted views of a day at the beach or a night out on the town. And despite its non-traditional look, the KV7’s length (191.85 in.), width (80.0 in.) and wheelbase (122.0 in.) are consistent with the van segment and allow flexible seating configurations and a multitude of storage options.

Open, Relaxed Interior
In the process of rethinking what a van’s exterior appearance and image could be, Kia’s Southern California design team also envisioned an interior to meet the needs of an entirely new group of consumers – a group of people referred to as “Ringleaders.” Rather than using a van to transport children and their accompaniments, Ringleaders are busy organizing road trips, social outings and new adventures for themselves and their friends to experience together. As such, the KV7 concept’s interior employs four custom-built swiveling seats, including the driver’s seat, and a rear-corner mini-lounge with seating for three and integrated storage compartments to promote interaction in an open social environment.

The simple yet sophisticated theme is brought to life inside the KV7 concept through its modern color palette featuring soft beige and green tones and the use of unique seat and surface materials. The KV7 utilizes a variety of unconventional textures, including reclaimed teak wood flooring and sustainable wool and felt materials help to foster a warm and inviting atmosphere.

When the KV7 concept’s push button start is engaged, the entire front dash moves more than six inches toward the driver, bringing all controls within easy reach, including the large multi-use display which integrates infotainment, climate and navigation systems in one simple-to-use interface controlled by a trackball mouse mounted in the dash. Rear passengers have their own, separate interface in the form of a floating tabletop touch-screen computer display. The KV7 is Wi-Fi enabled, providing both the front and rear displays with Internet capabilities and the ability for multiple passengers to connect their smart phones to the vehicle at one time and sign on to social networking sites.

The final element that separates the KV7 concept from the rest of the minivan crowd can be found under the hood – the concept is powered by Kia’s new Theta II 2.0-liter GDI turbocharged engine, which is capable of delivering up to 285 horsepower, and is mated to a six-speed automatic transmission to deliver V6-type power and performance while achieving better than 30 miles per gallon on the highway .