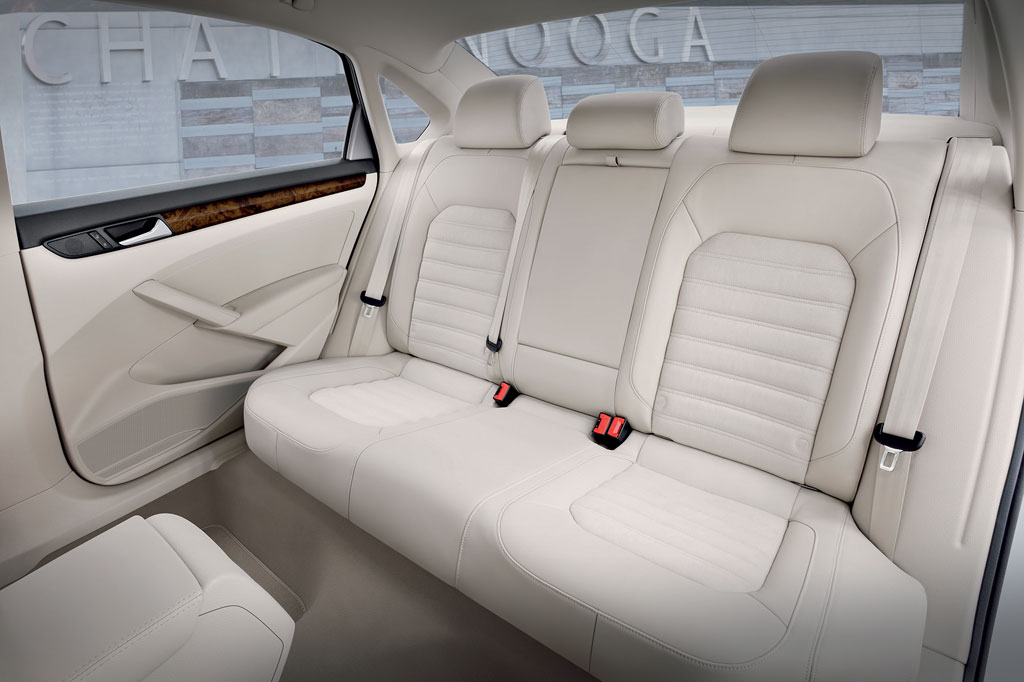 The Jetta – whose latest version was tailored to the USA more than ever – is the most successful car in America with German technology. Now, that best-seller is being followed by the world premiere of a car in the next class up – another model that Volkswagen has specifically developed for the United States: the entirely new Passat. Larger, more comfortable, more efficient and with higher quality than ever. The car’s technology and styling came from Germany, while Volkswagen of America provided the conceptual direction. The saloon will be built in the new US plant in Chattanooga, Tennessee. Market launch begins in mid-August.

Even the base version is driven by a powerful 125 kW / 170 PS five-cylinder petrol engine (extra urban driving range with automatic transmission: 31 mpg). Other engine options: an extremely economical Clean Diesel (TDI) with 102 kW / 140 PS (43 mpg extra urban) and a six-cylinder petrol engine, the VR6 with 206 kW / 280 PS, which is paired with a standard dual clutch transmission (DSG). The alliance of VR6 and DSG makes the Passat a top-flight sports saloon (28 mpg extra urban; 0-60 mph in 6.5 s).

Features: all key features are standard
Although the new Passat offers considerably more space and comfort, Volkswagen was able to reduce the price level by several thousand dollars (!) compared to the previous model. With its entry-level price, the Passat is now in the 20,000 US dollar range (final prices to be announced in March). There is hardly any other saloon of this size (exactly 191.7 inches or 4,868 mm long) that offers such high technology and quality at a comparable price.

Just how ingeniously the Passat was designed is illustrated by two of its features. First: “Valet Parking.” If the car is to be driven by a third party, a press of the Valet Parking button in the glove compartment is all it takes to secure the boot and the compartment itself. Then they can only be opened with the special Valet Parking Key accessible only to the vehicle owner. Second: “Remote Start.” In extreme weather conditions, the driver can start the engine (automatic or DSG transmission) by remote control (maximum ten minutes running time) to have the climate control system either cool down or heat the car’s interior to a preset temperature before driving off.

Styling: visual dominance of a large saloon
It is the balanced proportions of the new Passat that give it its entirely unique, timeless and dominant styling. Just a few precise lines suffice to define its form. These style lines reflect par excellence the Volkswagen’s new “design DNA”: clear, minimal forms and lines with a predominance of horizontal body elements. Visually, this impressive styling launches the Passat up half a class. The bottom line: this car looks much more expensive than it actually is.

Interior: here too, the Passat has the look of very expensive cars
As mentioned, the new Volkswagen has a length of 191.7 inches (4,868 mm). Its wheelbase is 110.4 inches (2,803 mm) and its width is 72.2 inches (1,835 mm). So, its size has increased in all three dimensions compared to the previous model, which already offered a spacious interior. As can be expected, the new car offers even more impressive interior space. The larger wheelbase translates into a noticeable increase in rear seating space; in this aspect, the stately Passat protects its lead over its key Asian competitors. Typical Volkswagen: without exception, the car’s controls are self-explanatory; every driver can intuitively operate the new Passat. Over the past ten years, Volkswagen has defined its own completely new ergonomic standard, a standard that is reflected by the high quality of materials that are used.

Passat in America: potential to be a bestseller
The first Passats found their way to America back in 1987. Since then, over 700,000 Passats have been sold between New York and Los Angeles. Plans are in place to produce about one million new generation US Passats over the next seven years. The contrast between these two figures – 0.7 million Passats in 23 years versus 1.0 million Passats in just seven years now – makes a clear statement about the new Passat’s key role for Volkswagen of America. The company wants to triple the total annual volume of all of its models in the USA to about 800,000 units by 2018. Incidentally, to date over 15 million people have chosen a Passat; so this Volkswagen model series represents one of the very great successes in automotive history.