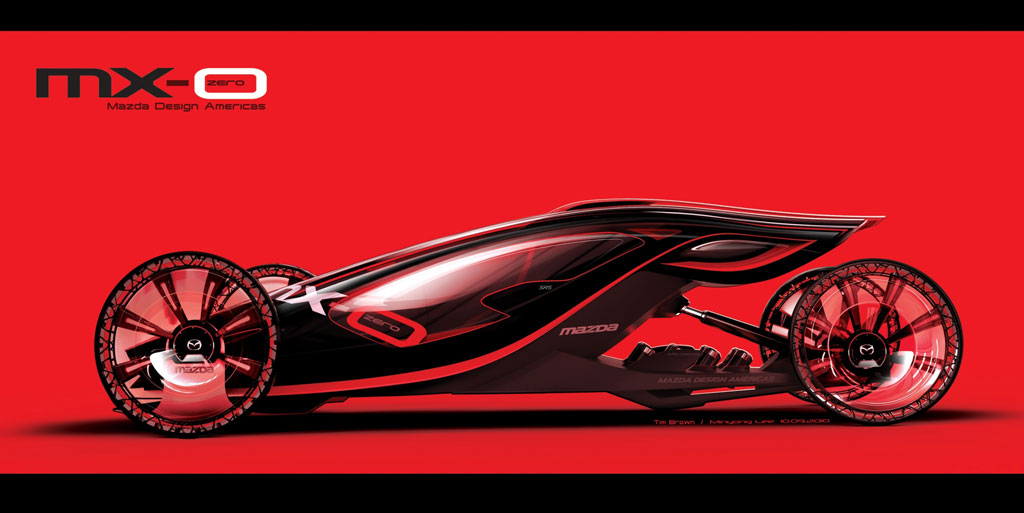 Designed by Mazda’s North American Design team, the MX0 is Mazda’s entrant into this year’s LA Design Challenge. The competition brief was to design a car which weighed under 1000 lbs (454 kilograms) and could safely and comfortably transport up to four people.

Mazda’s long-time commitment to low weight is driven by the belief that effortless cornering and acceleration should be at the heart of every Mazda vehicle. The MX5, Mazda’s lightweight icon, tipped the scales at a little over 1,000 kilograms in its first generation and was seen as the logical starting point for the MX0.

With the MX5 as a benchmark and seeking to create a concept on paper aimed at the global market in 2020, the design team at Mazda North America carried out a systematic process of reduction and consolidation. This resulted in each component in the MX0 being redesigned to carry out the functions of several MX5 components, effectively replacing a multitude of MX5 parts with fewer, simplified ones. Innovative light weight materials have been used extensively to obsessively lower weight.

Major weight savings have been made by using unique methods and materials in key areas that constitute the greatest mass in today’s cars. A bonded two-piece monocoque structure, similar to a Formula 1 car, is used for the safety cell, subframes, body panels and interior surfaces – essentially one simplified structure. Manufacture of the structure could be automated using composite sandwich technology.

The second major area of weight in any car is the drive-train. With electric propulsion showing great promise for future weight reduction the MX5’s ultra-light mass would be pushed by high-torque electric motors, the high power to weight ratio bringing the MX0 to life. By decreasing the mass of the structure and components of a car, smaller motors and less energy are required to propel the vehicle. As a result, the weight of the drive-train in the MX0 is a scant 180 lbs compared to the MX5’s 630 lbs system.

Heavy components such as glass and suspension elements have been replaced by lighter, stronger ones. For example, sub-components such as coil-over springs and wishbones have been replaced by spring arms, made in a similar fashion to ultra-light snowboards: springy aluminum honeycomb core with a flexible glass-fibre skin. Minimal interior padding is used only where needed, exposing the purposeful monocoque structure.

Safety has been addressed by creating an exterior airbag system that deploys an open-cell crumple zone when it senses an impending crash. Perhaps most importantly, all of the materials in the MX0 could be mass produced at relatively low cost if demand facilitated new tooling and preparation for high volumes.