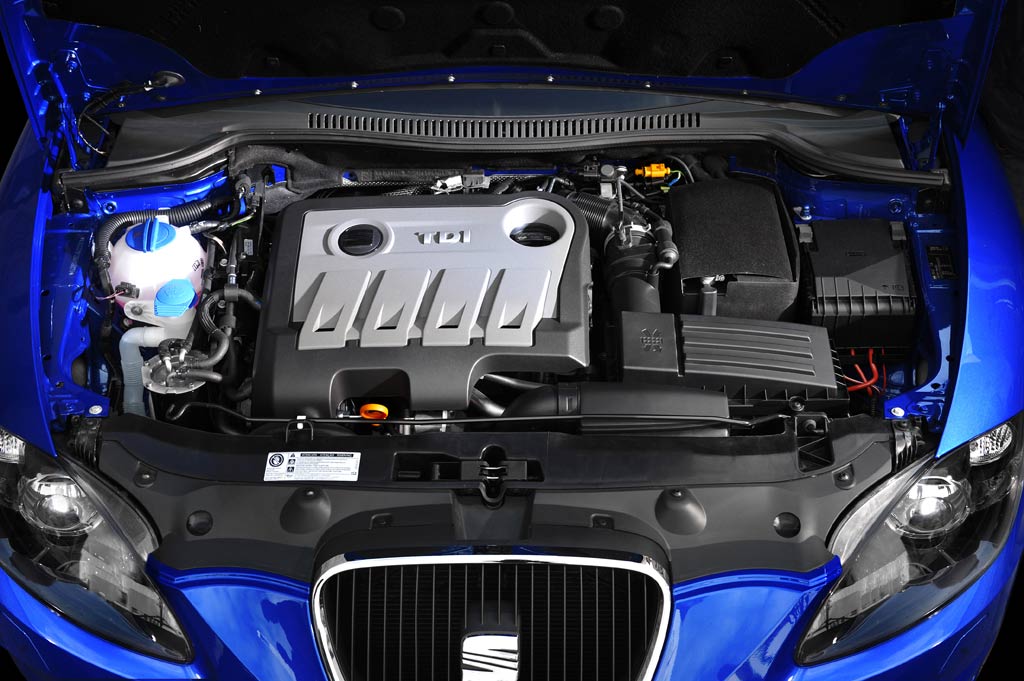 SEAT has updated the engine line-up on its Ibiza, León, Altea and Exeo models. The Ibiza is now available with the new 105 hp 1.2 TSI unit with a manual gearbox on its ECOMOTIVE version and a DSG gearbox to replace the 105 hp 1.6 engine. The Altea and León range now features the 140 hp 2.0 TDI engine with common rail technology and manual or DSG gearbox instead of the same unit equipped with a pump injector, while the Exeo range welcomes a new entry-level petrol engine – the 120 hp 1.8 TSI that is taking the place of the 102 hp 1.6.

The 1.2 TSI engine is available on all the Ibiza body styles (5-door, SC and ST) with Style and Sport trim mated to either the efficiently sleek seven-speed DSG gearbox or the five-speed manual with the automatic Stop/Start system and energy regeneration function of the ECOMOTIVE version.

SEAT León-Altea 140 hp 2.0 TDI CR – more comfort yet lower consumption
The SEAT León once again makes a statement. This time, equipped with the new, high-performance 140 hp 2.0 TDI CR engine, which combines nimble acceleration with an exceptionally smooth and efficient driving experience. The new SEAT León 2.0 TDI mated to a six-speed manual gearbox features a reduced emissions figure of 125 g/km (compared to 147 g/km of the previous model) and an average fuel consumption of only 4.8 litres per 100 kilometres, which is 15 % less than the engine it is replacing.

The 140 hp León 2.0 TDI CR can also be mated to a six-speed DSG instead of the manual gearbox. This combination delivers an average fuel consumption of 5.3 litres per 100 km and 139 g/km of emissions. Both versions are available in Style and Sport trim.

On the other hand, the Altea and Altea XL equipped with the 2.0 TDI engine only consume 4.9 l/100 km and record a CO2 emissions figure of 129 g/km, a further accomplishment in SEAT’s strategy to reduce its carbon footprint. Besides, this new version consumes 0.8 litres less per 100 km than the previous model, which is the same as a 14% savings. The new engine is considerably quieter and smoother, which makes driving on long trips much more pleasant.

But these achievements subtract nothing from the Altea’s performance – in fact, quite the opposite. 0 to 100 km/h acceleration takes 9.7 seconds, which means that the new version is also quicker off the blocks than the previous model, and top speed is clocked at 201 km/h. The same as on the León, the new 140 hp Altea 2.0 TDI CR versions can also be mated to the six-speed DSG gearbox, but only with Style trim.

The Altea range comes complete with the all-road Freetrack, which combines the great utility of the family-size Altea XL with the design and performance of an SUV. The four-wheel drive Altea Freetrack equipped with the new 140 hp 2.0 TDI CR engine consumes 5.9 litres per 100 km on average, and emissions stand at 155 g/km. This engine is not available on the Altea Freetrack mated to the DSG gearbox or on the two-wheel drive version.

SEAT Exeo 120 hp 1.8 TSI – a new engine that completes the range
The basic SEAT Exeo version now comes equipped with the modern 1.8 TSI engine. This turbo-charged direct injection petrol unit delivers 120 hp and replaces the previous 102 hp 1.6. It is available with Reference trim and the SEAT Exeo with this engine under the bonnet is extremely cost-effective.