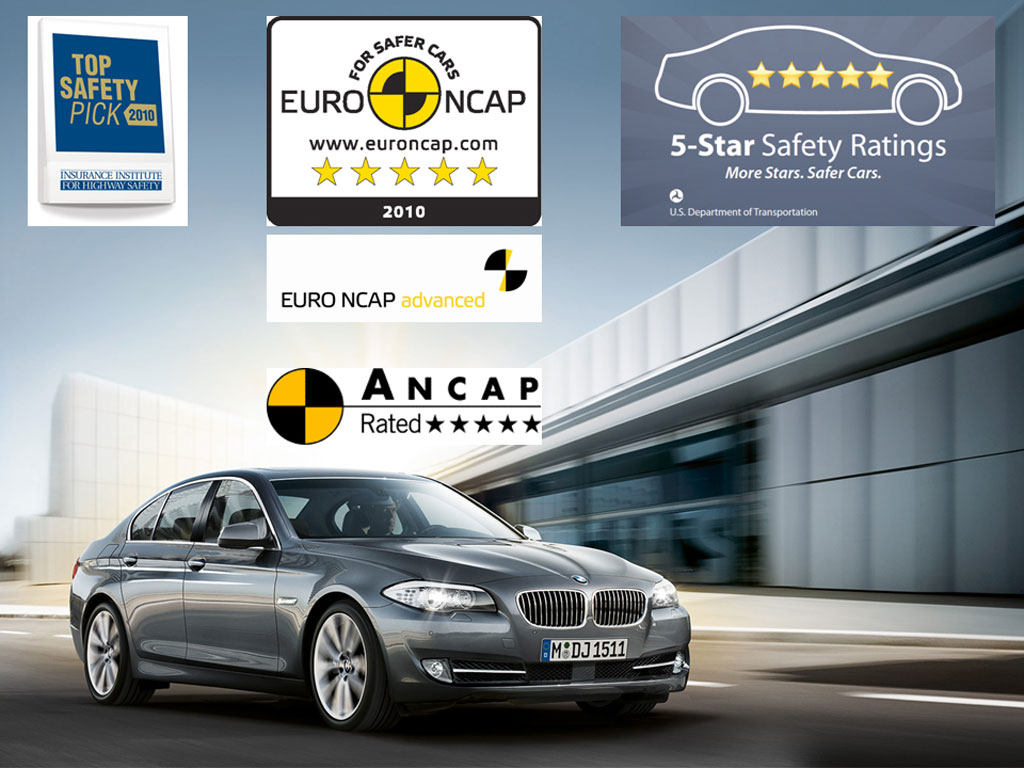 By launching the new BMW 5 Series Sedan, the German premium automobile manufacturer is setting new standards not only in aesthetics and driving pleasure, but also in safety. This exceptional position has now found renewed and impressive testimony in the US NCAP crash test. The BMW 5 Series Sedan is the first vehicle that was awarded straight away the highest number of points, 5 stars, in the new and considerably more stringent test procedure of the US National Highway Traffic Safety Administration (NHTSA). The same number of points had already been awarded previously to this four door model in the Euro NCAP crash test. Moreover, the BMW 5 Series Sedan ranks among the first winners in Europe that Euro NCAP experts have honoured in addition with a special award, in recognition of its Assist Advanced eCall, an advanced emergency call system with automatic localisation and accident severity detection. In the USA too, the new BMW 5 Series received yet another honour for outstanding passenger protection: the Insurance Institute for Highway Safety (IIHS) voted it the Top Safety Pick on the strength of its top grades in all test categories.

This double award of 5 stars and the additional honours all reflect the outstandingly high safety level of the new BMW 5 Series Sedan that will be meeting the complex requirements on the international autombile markets. As a global provider of premium cars, BMW develops for all of its models fully integrated safety concepts that are not optimised solely for specific test procedures, but whose safety scope and quality provide the basis for excellent results in all relevant crash tests throughout the world. This ensures the maximum of protection not only for the dummy in the laboratory, but also for the vehicle’s occupants in actual traffic conditions when a critical situation arises or a collision is unavoidable.

Following extensive revisions this year, the US NCAP crash test was performed on a total of 33 current models from American, German, and Asian manufacturers. The tests included e.g. a head-on collision with a solid obstacle, two side collisions, and a rollover scenario. The crash test properties are assessed in particular with respect to occupant cell stability, safety equipment scope and effectiveness, and risk of injury to occupants as determined by the sensors fitted on the dummies.

New to the program is a so-called pole side impact, and in addition there was a significant increase in the stringency of thresholds relevant to top score achievability. As one of the consequences, vehicles that had been awarded top marks earlier under the previous test conditions were being downgraded by the NHTSA in some cases to as low as three stars. Whereas in earlier years, up to 90% of all tested vehicles were being awarded five stars, this year saw only two of thirty three models. Solely the new BMW 5 Series Sedan passed the demanding test program straight away with an overall grade of five stars. Another vehicle was likewise honoured with top grades following a second test run with subsequently optimised safety measures, but all other models achieved only two to four stars in the overall assessment.

For the new BMW 5 Series Sedan, the series is continuing the line of outstanding ratings from renowned safety testing institutes. Previously too, in extensive crash tests analogous to the traffic safety administration NHTSA, the US institute IIHS funded by the insurance sector had already awarded top marks to the Sedan for its occupant safety. One special feature of this test program is the lateral impact of a 1.5 t deformable barrier at a particularly high point on the vehicle’s side, simulating thereby a side collision with an SUV. In addition, the IIHS also utilises a roof strength test to investigate the stability of this structure in rollover scenarios. Having achieved the best grade in all test categories, the BMW 5 Series was voted Top Safety Pick.

The IIHS panel classified both the crash test properties and the safety equipment of the Sedan as exemplary. For instance, the crash active headrests fitted as standard prove to be a particularly effective measure for reducing the risk of whiplash injuries in the event of a rear collision. On this point the IIHS confirmed the positive judgement that the seats of the new BMW 5 Series Sedan had already received previously in the Euro NCAP crash test.

In Europe too, the positive ratings reach beyond the overall assessment of 5 stars. The new BMW 5 Series Sedan was the very first vehicle to achieve 100% in the safety equipment category of the Euro NCAP crash test. In the Euro NCAP pedestrian protection category, with a far higher priority than in the US program, the BMW 5 Series could likewise achieve the best score to date. The Sedan’s active engine compartment lid rises automatically during a collision with a pedestrian or cyclist, presenting an enlarged crumple zone for reduced risk of injury.

Moreover, this institution funded by European governments, automobile associations, and insurance companies is expanding its assessment program this year to include for the first time safety relevant technologies that are not being considered yet in the scope of previous crash tests. These innovative safety systems to a stringent test procedure that is intended to verify a perceptible gain in safety for actual accident situations. In the case of the new BMW 5 Series Sedan, this Euro NCAP Advanced Award went to the Assist Advanced eCall, an advanced emergency call system with automatic localisation and accident severity detection by BMW ConnectedDrive. In the event of a collision, this function automatically alerts emergency services and transmits additional data serving to locate the vehicle and assess the potential risk of injury to the occupants.