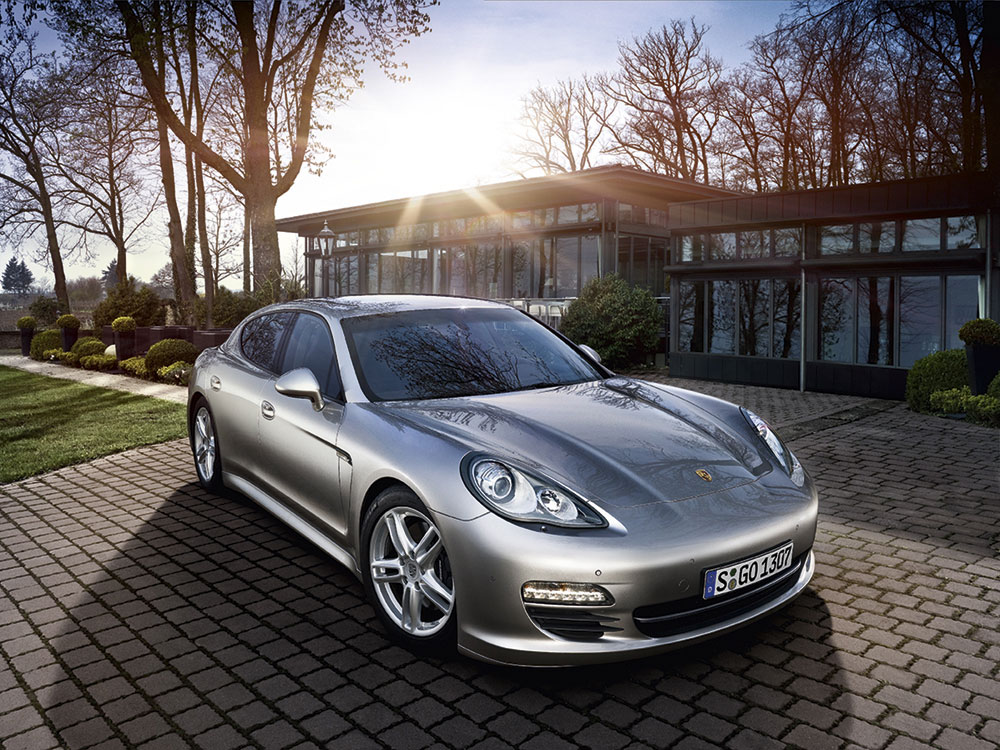 The Cayenne and Panamera series made by Dr. Ing. h.c. F. Porsche AG, Stuttgart, are going down very well with Porsche customers worldwide. This means that both the new sporty off-road vehicle and the four-door Gran Turismo are not just the most sporting models in each of their segments, but also that they fit harmoniously into the Porsche model series. The design language, created by Porsche Chief Designer Michael Mauer, is purposefully oriented on the design DNA taken from the company’s sports cars, and most especially on the classic Porsche 911. No matter which angle you observe the Cayenne and Panamera from, the Porsche brand recognition is always there.

The sporty and elegant appearance of the new Cayenne, which has been available since May 2010, was also the main reason why readers of the German “auto motor und sport“ magazine voted the Porsche SUV as the best-looking model in its class by a long head at the “autonis” design prize. In the case of the “Das Goldene Klassik-Lenkrad“ (the golden classic steering wheel) prize, issued this year for the first time by the “Auto Bild Klassik“ magazine, the Porsche Cayenne won the title of “Klassiker der Zukunft” (classic car of the future) at first try in the off-road-vehicle class with around a quarter of the votes. This title is awarded to vehicles with the biggest potential for becoming classic cars. On top of this, the Cayenne Diesel won the title of “Firmenauto des Jahres” (company car of the year) which was awarded jointly by the “Firmenauto“ magazine and the Dekra independent inspection organisation after extensive testing and comparison runs.

With sales of 29,855 vehicles, the Cayenne was the bestselling Porsche model in the 2009/10 business year, and a healthy 11,618 of these customers bought the new Cayenne. The most sought-after Cayenne engine in Europe is the diesel, which was widely accepted on the market, whereas outside Europe the models powered by the V8 engine top their respective market segments.

However, just as impressive as the Cayenne’s success is the acceptance of the luxurious four-door Panamera, which first made its debut on the world markets from September 2009 onwards. Precisely 21,706 vehicles have been delivered to customers since then, and in Germany alone the model found around 2600 buyers. And, since the current order levels are in the high thousands, successful development of this new customer segment is guaranteed. The recently introduced Panamera with the newly-developed Porsche V6 engine plays a considerable part in this success. With the Panamera, Porsche has clearly positioned itself in the upper and luxury class with this sporty model and is already reaching a segment share of 13 per cent there.

Just like the Cayenne, the Panamera has also decorated itself with several public and expert prizes. Again, the “auto motor und sport“ readers voted it into first place in the luxury class in the “Die besten Autos” (best cars) vote. It was also awarded the coveted “Auto Trophy“ by the German “Auto Zeitung“ specialist magazine in addition to “Das Goldene Lenkrad“ (golden steering wheel) from “Bild am Sonntag“ and “Auto Bild“. Moreover, the luxurious Gran Turismo won a whole series of international prizes. The British “Vehicle Dynamics“ specialist magazine gave it the “Car of the Year“ and “Dynamicist of the Year“ awards. In the USA, the editors of the “Inside Line“ online magazine also awarded the “Most Wanted Award“ to the Panamera.