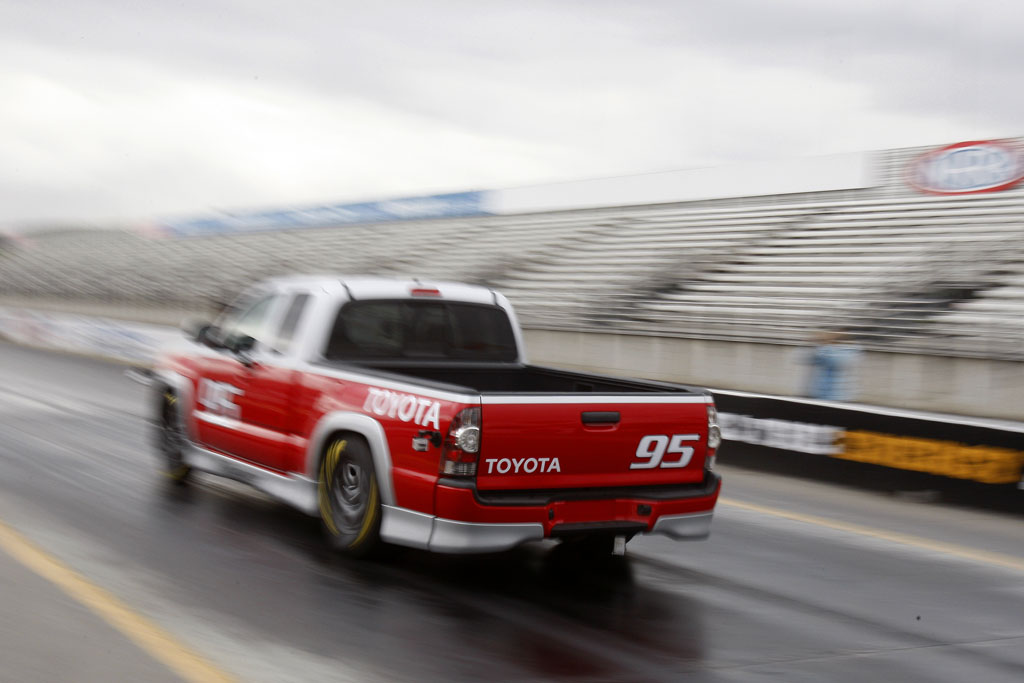 The Tacoma X-Runner RTR (Ready to Race) project pickup truck, which will make its public debut at the 2010 SEMA Show, is an exercise in demonstrating Toyota’s engineering prowess by creating an in-house, high performance vehicle through the utilization of Toyota parts. As a result, the Tacoma RTR is a “parts bin” build with all but a few components currently available on Toyota products (traction bars and drive-line shaft are the only two non-Toyota parts).

The Tacoma X-Runner RTR achieves its performance credentials by dropping in a completely stock, current-generation Tundra 5.7-liter V8 engine into the unmodified engine bay along with a six-speed automatic transmission. A Toyota Racing Development (TRD) Supercharger Kit was added, bringing the SAE certified power stats to 504 horsepower and 550 lb.-ft. of torque. The truck runs on premium gas rather than race fuel.

A stock Tundra rear axle, with a 4.3 ratio and 10.5-inch ring gear, was narrowed a total of 5.7 inches to Tacoma rear-track width). A TRD prototype mechanical limited slip differential, designed by Eaton, was added to maximize traction. The truck rides on current generation Tacoma 15-inch styled steel wheels that were modified to 10-inches wide in the rear and wrapped by 30×11.5×15-inch Goodyear Eagle Dragway Specials. The front wheels are 4.5-inches wide and mounted to 28×4.5×15-inch Goodyear Eagle Front Runners.

The Tacoma X-Runner RTR was lowered approximately 4.5 inches from stock X-Runner height, and a custom exhaust system was fabricated to include two TRD perforated-chamber mufflers with a 3.5-inch pipe. The only body modification to the X-Runner RTR was the relocation of the exhaust outlet from behind the passenger-side rear wheel to underneath the cab to help maximize rear-suspension compression, which is common in hard launches. The brakes were left untouched from the stock Tacoma X-Runner braking system, and vehicle traction aids are still functional, including ABS, Vehicle Stability Control and traction control.

The exterior body panels of the Tacoma X-Runner remain untouched. A silver and red paint scheme applied by Five-Axis was inspired by classic low cost but ready-to-race sports cars, including the late 1960s Dan Gurney Cougar XR7-G. The number “95” on the doors signifies the first model year the Tacoma nameplate was sold in the U.S. The Tundra i-Force engine badge was painted on the front fenders to signify the upgraded power plant and is in the same location it would be found on the current Tundra. In classic hot rod style, the hood is adorned with “504 HP” graphics signifying the SAE verified horsepower. Also on the hood, and unique to this build, is a TRD Supercharger graphic featuring a tornado, signifying the forced induction. The side rocker panels feature the X-Runner logo.