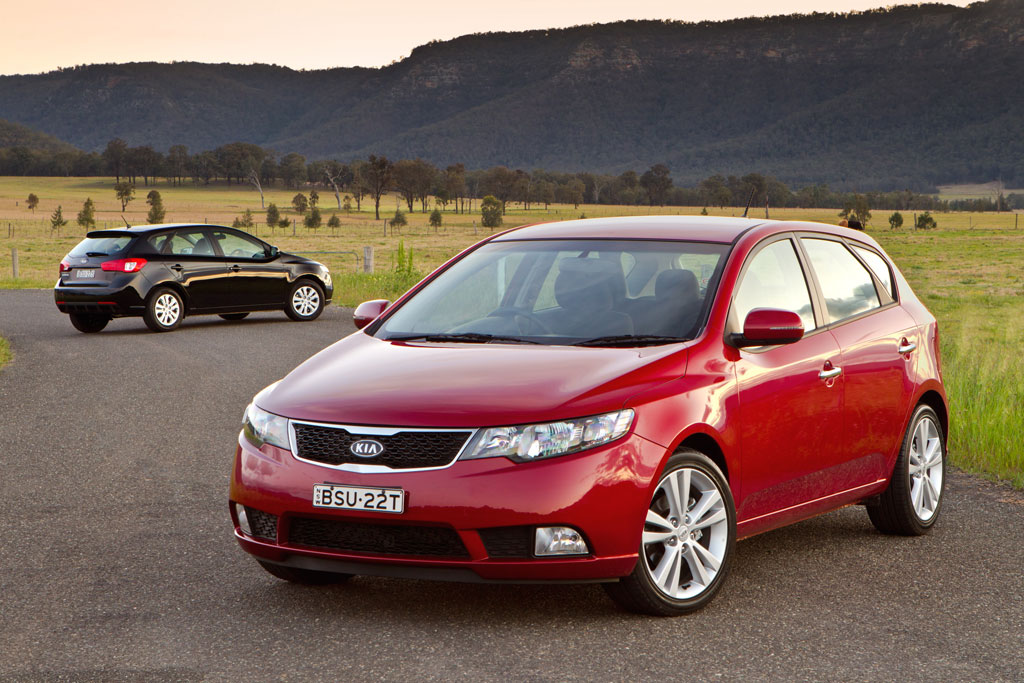 Now, Kia is introducing a third member of the Cerato family – the 5-door Hatchback, to strengthen its representation in what is arguably the world’s most important market sector – the ultra-competitive small passenger vehicle or C-segment.

First shown at the New York Auto Show earlier this year, Kia anticipates that demand for C-segment hatchbacks across the Cerato 5-door markets, will grow to more than 1.2 million units by 2012, a trend increase which is also bound for Australia.

“The latest Cerato is designed to appeal especially to those consumers with young families who prefer a 5-door hatchback for its style and enhanced practicality,” said Kia Motors Australia Chief Operating Officer, Tony Barlow. “The availability of this third body style for our small passenger segment category will enable Kia dealers to meet the needs of a broader range of customers. This derivative will boost total Cerato sales to an even higher level across all Australian states. “Most significantly, the new model is a continuation of the local ride and handling development work carried out by Kia Motors Australia on Sportage earlier this year and is another step in what will be an ongoing program of launching new vehicles in Australia which are locally adapted to suit Australian driver’s discerning tastes.”

As well as its all-new body shape, the new Cerato 5-door model introduces styling, equipment, refinement and technical improvements, which will also feature on the 2011 Cerato sedan and 2-door Koup models (sedan and Koup upgrades are available from January)

Technically similar to its sedan and Koup sister cars, the new Cerato 5-door has the same overall width, height and wheelbase as the sedan, but the rear overhang is reduced by 190 mm, as is the overall length, so the 5-door model is 4,340 mm long.Despite its more compact dimensions, the hatchback’s cargo volume of 385 litres (VDA) is highly competitive in its class.

The roof, rear side panels, C-pillar, tailgate with rear spoiler, rear bumper, light clusters and two-tone spoiler are all new. At the front, bold styling incorporates a new radiator grille, new lower air-intake grille and new-shape fog lamps. The door mirrors are new and offer an LED indicator light guide, while the 17-inch alloy wheels come in a ‘double five-spoke’ design. The rear combination lamps, which have etching-processed lenses, are split across the tailgate shut line and a sporty rear diffuser allows the exhaust tailpipe to be displayed in the SLi model.

Steering wheel ‘paddle shifters’ are available with the automatic transmission in the SLi model, while a folding key and keyless entry and Bluetooth hands-free is standard across both models. A leather type ‘boot’ gear lever gaiter is fitted, together with chrome edge trim around the twin cup holders and the centre console has a new premium style which contrasts nicely with the one tone black dash.

The new Cerato 5-door Hatchback comes with two standard trim levels with the Si fitted with a black fabric tricot finish while the range topping SLi comes with the black fabric Mesh Rachel with red stitching and the option of black leather trim.

For maximum cabin versatility, this model’s rear seat cushion and backrest are split 60/40 with the cushion flipping forwards and the backrest folding down to create a flat cargo floor.

Although the overall height of the Cerato hatchback and sedan is the same (1,460 mm), the extended roofline of the 5-door creates an extra 20 mm of rear seat headroom.

Now, during development of the 2011 Cerato 5-door, as well as the 2011 Cerato 4-door and Koup, further NVH improvements have been achieved. Additional sound-dampening foam is fitted in the A, B and C-pillars and the luggage bay side panels, the exterior cowling top panel is a heavier gauge steel, the interior dash-top padding has thicker insulation, the rear parcel tray has extra insulation and the trunk carpet is made from a heavier density material.

Gasoline engines with six-speed transmissions
Kia’s new Cerato 5-door will be available with the four-cylinder petrol 1,998 cc Theta II powerplant which generates 115kW and propels the hatchback to 100 kph in 9.1 seconds (M/T), with a top speed of 190 kph.

The new Cerato 5-door is available in the latest six-speed manual or automatic transmission. The manual is fitted with ‘high’ top gear ratios for reduced engine revs and improved fuel economy while the new six-speed automatic transmission is equipped with a gate-type shift pattern and offers the driver fully automatic or Sport modes.Sports mode is even further enhanced with the standard inclusion of steering wheel ‘paddle shifters’ providing fingertip control in the SLi model.

Sophisticated running (and stopping) gear
The introduction of the Cerato 5-door heralds the arrival of the second vehicle launched in Australia which has been specifically adapted by Kia Australia’s ride and dynamic team.Fortunately for the other members of the Cerato family, the sedan and Koup, the changes flow on to them as well.

The Cerato 5-door features a MacPherson strut front suspension and a CTBA (coupled torsion beam axle) rear suspension. The rear shock absorbers and coil springs are mounted separately to minimize intrusion. Both the shock absorbers and springs received a localised tune and spring rate adjustment which is unique to the Australian models.

Similarly the Electric power-assisted steering (MDPS – motor driven power steering) which results in an estimated 2-to-3% fuel-saving also received a unique Australian tune to provide a ‘local’ feel. The resulting linear torque build-up empowers the driver making the vehicle easy to park while still maintaining good weight through the steering wheel when on the open road. For powerful and stable braking, all Cerato 5-door models are equipped with 280 mm ventilated front discs and 262 mm solid rear discs.

The end result is a vehicle with ride and handling dynamic that is more refined and rough road compliant, a key vehicle acceptance requirement in the Australian market.

Equipped with ‘active’ and ‘passive’ systems
Like its 4-door and 2-door siblings, the new Cerato 5-door presents buyers with a range of state-of-the-art safety systems and equipment. Standard ‘active’ technologies include: ESC (electronic stability control) to enhance cornering ability and several systems to boost braking performance. The SLi model includes obstacle sensors in the rear bumper which help avoid contact with pedestrians and other vehicles when reversing.

The Cerato sedan has already achieved the top-score 5-Star rating in the USA’s official NHTSA crash tests (scoring 19 out of a possible 20 points) and a ‘Top Safety Pick’ designation by the IIHS for top ratings in front, side, rollover and rear impact protection tests.The new Cerato 5-door is engineered to perform equally well.