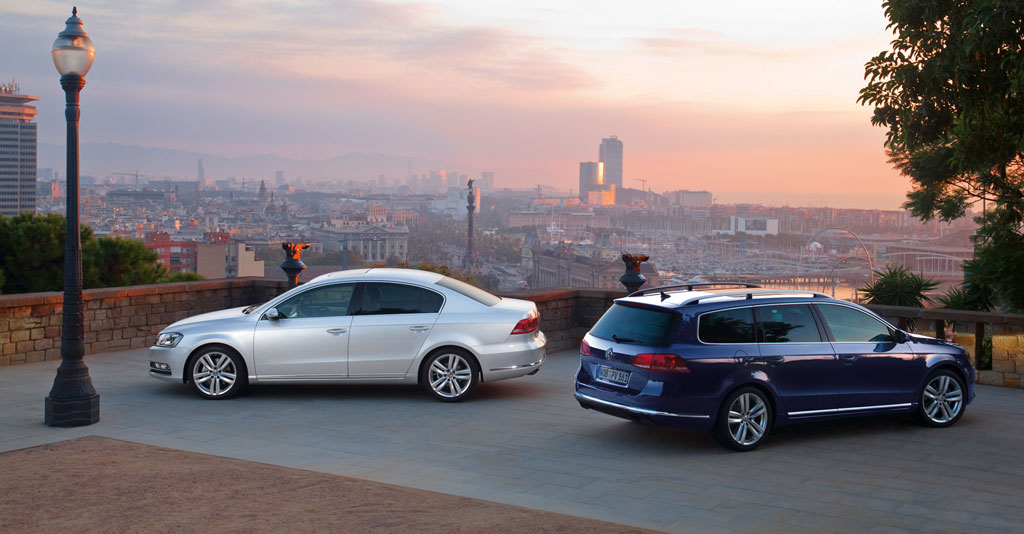 With over 15 million cars sold, the Passat by Volkswagen is one of the most successful automobiles in the world. Now there is a new Passat. It is the seventh generation since 1973. The styling of the bestseller was completely re-interpreted, and its front end shows parallels to the Phaeton and is more impressive than ever. Furthermore, the Passat has always mirrored the course of technological progress. And this applies unreservedly to the seventh Passat, which will launch simultaneously as a saloon and estate car. The overall range of technological innovatio¬ns now implemented in the Passat Trendline (entry-level), Passat Comfortline (mid-level) and Passat Highline (top model) has reached a scale previously found only in upper and luxury class cars.

More innovation
A world’s first in this class is the fatigue detection system that is offered on the Passat. The system is a standard feature from the Comfortline equipment line. The Passat is also the first Volkswagen ever to have a city emergency braking function. The assistance system is part of the further refined ACC adaptive cruise control plus Front Assist. The city emergency braking function, active below a speed of 30 km/h, also reacts to stationary vehicles; if necessary, it automatically initiates a braking manoeuvre, thereby contributing toward avoidance of an impending front end collision or at least minimising the resulting damage.

More comfort
Yet, the new Passat offers even more finesses. All it takes is a specific foot movement behind the car to open the saloon’s boot lid (Easy Open). At the press of a button, the Passat “sees” parking spaces parallel and perpendicular to the carriageway, and upon request it can automatically steer the car into the space with centimetre precision (Park Assist II).

Seeing more
The driver does not need to be concerned about controlling the main beam light switch any longer; it is always there as long as traffic allows. The reason: In conjunction with the standard H7 headlights, the Passat automatically switches the main beam on and off as a function of oncoming traffic and traffic ahead of the Passat. This optional main beam assistant is called Light Assist. If the car is equipped with bi-xenon headlights that come with cornering lights, the main beam remains continually active and is only masked where other traffic participants could be disturbed by glare; this main beam headlight assistant is called Dynamic Light Assist. Both systems become active as soon as vehicle speed exceeds 60 km/h. As on the Phaeton and Touareg, the Passat also warns the driver of vehicles in the blind spot (Side Assist). The new Volkswagen utilises images from a front camera to detect speed limit signs, and it displays them in the cockpit. This traffic sign detection system also “sees” no-passing zones when technically possible, and it calls the driver’s attention to them.

More quality
The technologies and the further improved workmanship and material quality is differentiating the Passat from its competitors more than ever. This quality is perceptible in the interior with its high-end materials, new seats and door trims and ambience lighting. An especially elegant effect is produced by the modified centre console and redesigned accents in the instruments that are visually appealing and pleasing to the touch.

More quiet
The new Passat is extremely quiet. The reason: Insulating materials specifically integrated in the dashboard area and doors filter out exterior and engine noises. In addition, a new acoustic film is embedded in the front windscreen and is available as an option for the front side windows; this film blocks out additional noise.

More safety
Progress has been made in the area of safety as well. The previous model already attained an impressive 5 stars in Euro-NCAP crash testing. Further advances include features such as seatbelt fastening detection for the rear seats and head restraints that now also adjust horizontally on the front seats (standard from Comfortline). The new head restraints for driver and front passenger reduce the risk of whiplash injury in a traffic accident. Moreover, new assistance systems such as Side Assist optimize safety in the Passat.

More sustainable
Last but not least, the new Passat sets standards when it comes to sustainability. All ten engines (77 kW / 105 PS to 220 kW / 300 PS) are more fuel efficient – by up to 18 percent! The “smallest” turbodiesel (1.6 TDI with 105 PS) now only consumes 4.2 l/100 km; that is equivalent to 109 g/km CO2. The Passat BlueTDI (103 kW / 140 PS / fuel consumption: 4.6 l/100 km) already meets limits of the Euro-6 emissions standard (Category N). Downsizing and technologies such as the Stop/Start system also ensure the best fuel economy among the petrol engines. Another pioneering engine: the 1.4 TSI (90 kW / 122 PS). In the BlueMotion Technology version it is satisfied with just 5.9 l/100 km. All values for the Passat Estate lie on the same good level (maximum of +0.1 litre compared to the saloon). It is worth noting that each of these models is a safe, comfortable and powerful touring vehicle. Only, they are also very low emitting, fuel efficient and blessed with extremely long driving ranges. In the case of the Passat 1.6 TDI with BlueMotion Technology, its 70 litre fuel tank capacity and 4.2 litre fuel consumption yield a driving range of 1,666 kilometres – on one tank of fuel. So, it is good that there is fatigue detection to remind the driver to take a break from driving after at most four hours.