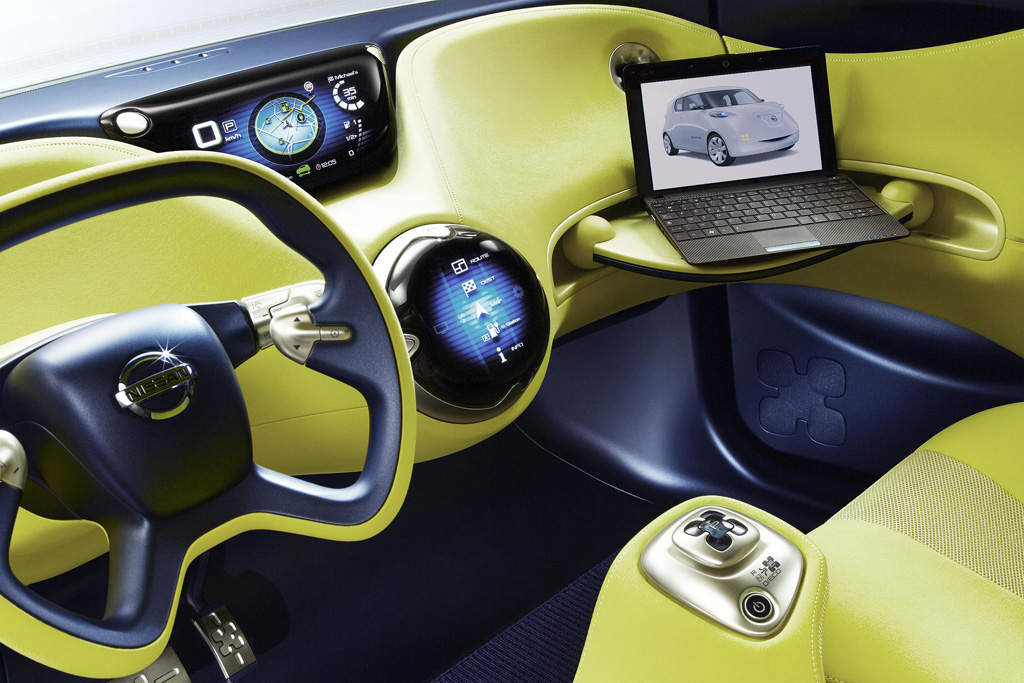 As our working and living situations evolve with the opportunities afforded by the digital age, our cars must adapt to the way we conduct our lives. Throughout the world, a new breed of entrepreneur has emerged. Preferring to work for themselves from their own homes or small offices, these new professionals do not work fixed hours, or have regimented schedules. The lines between their business and social lives are blurred, even non-existent, so their means of personal transportation must be equally multifaceted.

Just as a white tee-shirt is usually worn casually, but can be combined with a suit to look sharp, this genre-busting vehicle mixes the comfort and style of a passenger car with the businesslike utility of a commercial vehicle. Like the tee-shirt, Nissan Townpod can be used for business or pleasure or, as is increasingly popular, by those for whom business is pleasure.

Overview
Not so many years ago the car’s basic remit might have been to take a single occupant to work five days a week, have sufficient trunk space for a weekly trip to the supermarket and enough seats to transport a nuclear family to the coast for a long weekend. More recently, classic sedans and estates have evolved into hatchbacks, MPVs, SUVs and now crossovers, all designed for particular segments of the population, but none tailored to the specific needs of individuals who cannot be, and indeed strive to not be, so easily pigeon-holed.

Nissan Townpod provides a simple platform, which each user can individually tune to their own peculiar needs. Be they a musician transporting their kit between gigs, a delicatessen proprietor distributing their wares or an architect carrying drawings to a client, each can adapt the interior of their Nissan Townpod using proprietary as well as third-party sourced accessories.

“Only they know what is essential for their lives, so it is logical that they should be the ones who determine the ultimate specification of their cars. For them an off-the-shelf solution is not enough and the best-equipped people to tailor-make their cars are themselves. What is more revealing is that Nissan Townpod users do not appreciate stereotypes or status symbols. For them, the ultimate status is to have no status.”

Which brings us back to the functional, yet chic, but in no way pretentious tee-shirt. Just like the Nissan Townpod.

Exterior design
Externally Nissan Townpod consist of many familiar elements, yet it is different. It employs the same zero-emission technology found within Nissan LEAF. Charging points can be found in the nose behind an automatically retracting cover, which appears to be backlit thanks to its electric blue painted surrounds reflecting subtly off the car’s “Stratosphere White” body paint. Similar electric blue hints are visible behind the door handles, number plate, the spokes of the alloy wheels and within the headlamp pods. The car does not need to shout that it is an EV. It more subtly suggests its ecological and economical credentials.

The headlights reflect Nissan Townpod’s philosophy of stylish utility by serving as position markers when the blue “petals” are closed and headlights when open, while the external location of the pods eases basic maintenance. Similarly, the semi-silvered coating over the indicators is not just for effect. The mirror-like finish turns them into modern reflectors when the turn signals are not in use.

The innovative position of the headlights also allows a coupe-esque bonnet line, not dissimilar to Nissan Z, which feeds in to a visor-like wraparound, blue tinted glass house, reminiscent of Nissan Cube, while the galls to body proportions hark back to the rat-rods of the fifties.

The car is decidedly more van-like with its split rear doors. The rear features back lights on the right, a number plate on the left, and a rear-door handle set into a concave surface . Viewed from above the car’s space-maximising rectangular footprint flows into an elliptical roof, offering more graceful lines as well as increased aerodynamic efficiency.

The rear lights are designed to reflect light like cut jewels when not in use, and to sparkle rather than simply glow when illuminated. Innovative hinges allow the rear doors to slide, then open in confined spaces and then fold to the side of the car so as not to obstruct passing traffic or pedestrians. As the rear lights are positioned in the all encompassing rear doors a second set of position and indicator lights is located in the bottom sill of the doorway. A hatch-like sun roof, directly above the cargo area, allows Nissan Townpod to carry taller objects.

Interior design
The idea of simple form following function continues within Nissan Townpod. The cargo area, passenger space and dashboard are remarkably uncluttered yet do not feel spartan. Just because the interior is utilitarian by design does not mean that it cannot be stylish. The driver is faced with an uncomplicated yet futuristic steering wheel and two familiar stalks to operate the lights and wipers, but other than these controls – which are beautifully simple in their own light – the flowing dashboard is devoid of mechanical switches. Forward or rearward drive is selected using an uncomplicated joystick set into the right-hand side of the driver’s seat base.

Dual Screen Display
All controls for ancillaries such as climate control and media playback are accessed through two centrally mounted digital screens. The upper monitor serves as an instrument panel, displaying car speed, battery status and remaining range as well as a satellite navigation system. This system is also equipped with Bluetooth wireless technology, allowing it to communicate with the driver’s Personal Digital Assistant (PDA).

Masato Inoue, Product Chief designer of Nissan, explains, “Today, the first thing many people do when they climb aboard their car is program the navigation unit with a phone number, address or other details. This step will be unnecessary in Nissan Townpod as the car will communicate with your PDA’s scheduling function to find out where you are due to be and at what time. Accordingly, the navigation system will not only plot a route to your next meeting, but will map out a plan for all your appointments that day. If, due to unexpected traffic delays for example, one appointment appears likely to clash with another, the car will let you know so you can take appropriate action. It will also be able to suggest the most convenient time and place for you to recharge its lithium-ion batteries.”

The lower touchscreen provides all controls for the navigation system, allows users to perform system checks on the whole car and operates Nissan Townpod’s audio system.

“Who knows how we will store music in 2020?” says Bancon. “Not so long ago cars were fitted with cassette players, then CD players and now we must be iPodTM compatible. This will not remain the same for long, so Nissan Townpod must be forwards compatible with whatever must-have device sits in our future.”

Just as Nissan Townpod can connect wirelessly with the driver’s PDA, so it will also be able to access occupants personal music collections, or what ever device they use to receive Internet radio. “These devices may remain in passengers’ pockets, but it is also beneficial to keep them in within view, in some kind of bracket. But we do not know what these devices of the future will look like, let alone where passengers will want to keep them. So, we have developed The Puck”, Bancon concluded.

Easy Access
Access to the cargo area from the rear is unobstructed, thanks to the ingeniously hinged back doors, while gaping apertures on either side mean that cumbersome loads, or wriggling toddlers, can be placed in the car with ease at the curbside. These ultra wide doorways are possible because there is no “B-pillar” set between the traditionally hinged front doors and the sliding doors at the rear, with the locking mechanism of the former set into the leading edge of the latter.

Disappearing Long Sliding Rear Seat
The rear seat itself has an interesting trick incorporated into its design. While it is not uncommon to find rear seats that slide or fold, enabling passengers to either prioritise leg room or luggage space, the ultra-slim design of the seats means that the rear bench can fold and slide right into the back of the front seats, freeing the entire, flat-bottomed space behind to carry bulky cargo.

Colour Scheme
The dichotomy of having a stylish, professional cabin coupled with utilitarian cargo capabilities is accented by the use of soft artificial suede in front, but super-light, yet hard-wearing blue weave in the rear. The blue reflects Nissan Townpod’s professional, businesslike capabilities, while the yellow reminds the user that the car can be used for fun, too.

The Puck
The Puck is a rubber ball, about the size of a squash ball, with a wide groove cut into it. This groove can accommodate drink holders, cell-phone rests, hand-bag hooks or other items Nissan or third-party manufacturers think will be useful as the tools we use in our daily lives evolve. The Pucks themselves slot into rounded troughs set into the car’s dashboard, doors and centre console. Their position and orientation are ultimately decided by the user, not the car’s designers.

“In this way, owners can easily customise the interior of Nissan Townpod to suit their particular needs. The system is completely open source – we encourage individuals or other organisations to come up with accessories to complement this platform, ” Inoue said. “We have only begun to scratch the surface of the possibilities for the system.”

Conclusion
While Nissan Townpod has been created with the world’s entrepreneurs in mind, its appeal is likely to go beyond this expanding demographic to new families building their first home or retirees turning a hobby into a business. In other words, anybody who appreciates the customisable utility of its van-like abilities coupled with a chic and stylish cockpit designed with the future and not just today, in mind.

“The self employed tend to have very high expectations. They need to make the most of every investment. They will be early adopters of the possibilities made available through the convergence of electric-vehicle innovations and information and technology.” Bancon said. “At its core, a car is a means to transport people or goods from one place to another as simply and easily as possible. Nissan Townpod’s design supports the essence of its function. It is a smart car for people who demand more.”