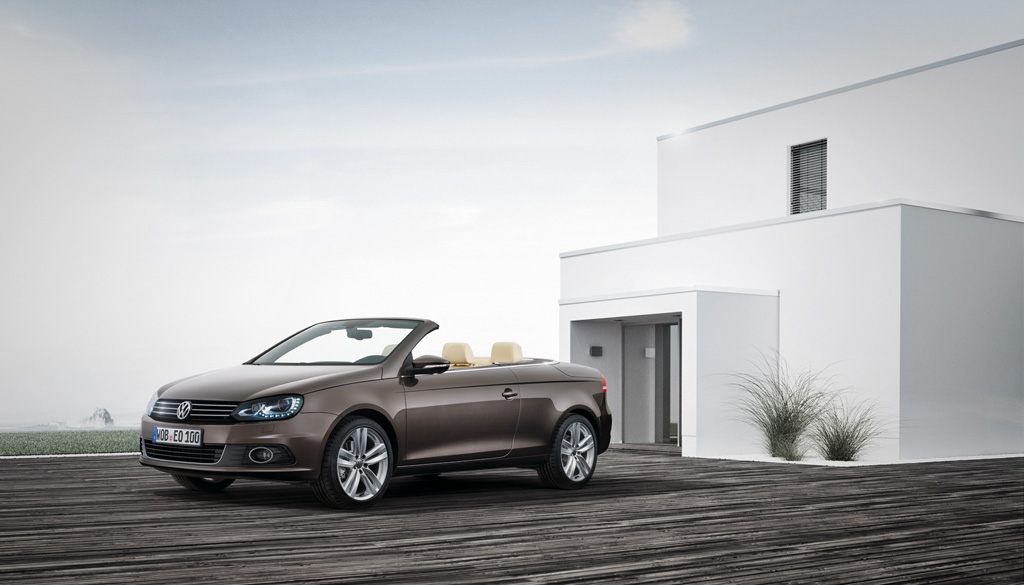 In the 10th month of the year, Volkswagen is already holding its 13th model premiere: the highly successful Eos open-top coupé has been given an updated design and further enhanced with numerous new features.

Clearly structured and horizontally contoured, the appearance of the new Eos follows the code of the Volkswagen design DNA. Extending now between the new headlights is a radiator grille consisting of three shiny black struts. From behind the Eos stands out through its reworked, two-part LED rear lights and redesigned rear bumper with diffuser.

In technical terms, numerous new details set the 2011 Eos apart. These include the ‘Premium’ multi-function instrument panel with colour display, the Light Assist main beam management system and second generation Park Assist. Also new on the Eos is the Keyless Access system, which as a new feature also opens and closes the roof by wireless remote control. The special Light Assist system takes over the function of switching between dipped and main beam, automatically adapting this to the traffic situation. ‘Cool leather’, available as an option, gives a pleasant feel to the cars’ seats even in hot weather. It reflects the sun’s rays and thus heats up much less than standard leather.

Through the use of BlueMotion Technology fuel consumption has been further reduced. On the Eos 2.0 TDI 103 kW / 140 PS, for instance, the Stop/Start system and brake energy recovery bring consumption down by 0.7 litres to now just 4.8 l/100 km. The new Eos will be unveiled to the public for the first time on 17th November at the Los Angeles Auto Show, with the European launch following from mid-January 2011. Offered with a range of four turbo-charged, direct injection engines (90 kW / 122 PS to 155 kW / 210 PS), the Eos will have a base price in Germany of €27,975.