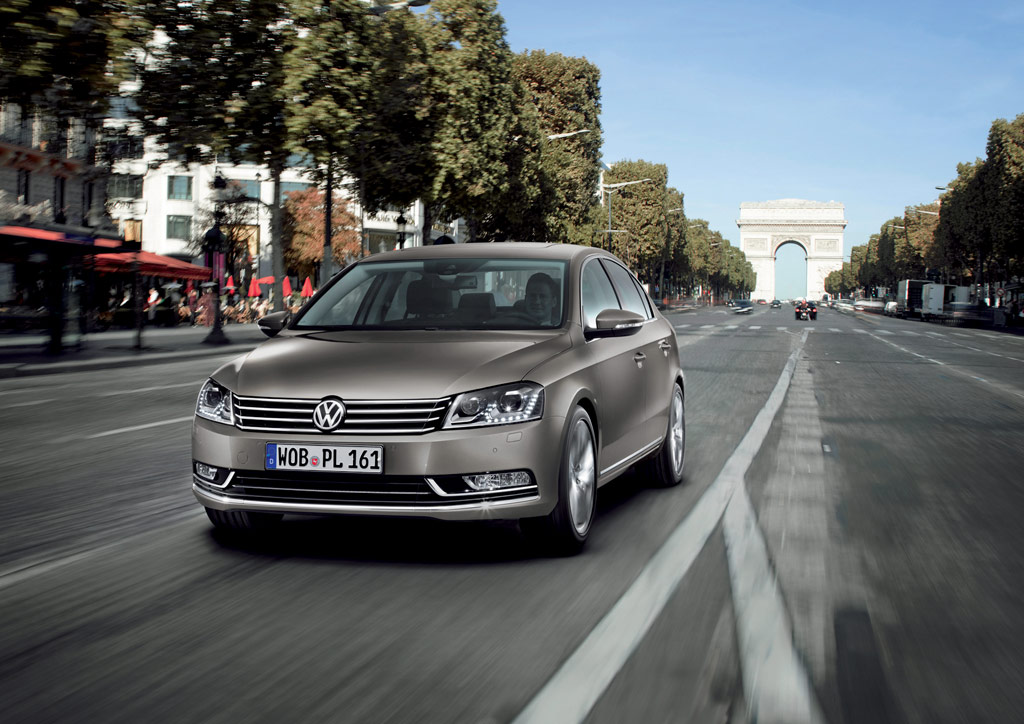 The Passat from Volkswagen represents one of the very great success stories in automotive history, with over 15 million cars sold since the Passat was first launched in 1973. It is now available in over 100 countries across the globe. Now, at the Mondial de l’Automobile in Paris (October 2-17), Volkswagen is presenting the world premiere of an entirely new Passat – as a saloon and an estate car simultaneously. The seventh generation of this bestseller will be available in initial European markets starting as soon as mid-November.

To the point – upper class flair in a mid-class car
The fifth and sixth Passat generations had already left conventional class boundaries behind and bridged a path to the next higher segment with their high-end features. The seventh generation Passat emphatically continues this trend. A completely new styling configuration was created; its front-end styling follows that of the Phaeton which was restyled mid-year. It simultaneously guides the Passat’s independent design into the future. Without leaving the mid-class in terms of pricing, the Passat approaches the top segments even more powerfully with its upgraded comfort, convenience, quality and safety properties as well as in its assistance systems. In fact, the Passat – available in Trendline, Comfortline and Highline equipment levels – now offers more value thanks to its optimised features. For example, standard equipment on all turbodiesel models of the base Trendline version now includes the energy-saving Stop/Start system and battery regeneration. All other petrol and natural gas engines have a battery regeneration system as well. For the smallest petrol engine, battery regeneration and the Stop/Start system are available as options.

Up to 18 percent improved fuel economy
As is usual for a Volkswagen, the new Passat also sets standards in sustainability. All ten engines (77 kW / 105 PS through 220 kW / 300 PS) are more fuel efficient – up to 18 percent more. The “smallest” and yet torque-strong turbodiesel (1.6 TDI with 105 PS and 250 Nm) now consumes just 4.2 l/100 km; that is equivalent to 109 g/km CO2. Meanwhile, downsizing and technologies such as the Stop/Start system contribute to extraordinary fuel efficiency in the petrol-powered versions. Pioneering here is the 1.4 TSI (90 kW / 122 PS); in the BlueMotion Technology version, it only consumes 5.8 l/100 km. The equivalent CO2 value is 138 g/km.

New safety features
Volkswagen is making genuine progress in the area of safety. The previous model already attained an impressive five stars in Euro-NCAP crash testing. The new model takes safety to a new level with features such as an automatic City emergency braking function and, on Comfortline models and above, a standard fatigue detection function. As a component of the optional automatic ACC adaptive cruise control system, in worst case scenarios the emergency braking function reacts independently at speeds below 30 km/h. So, it can help prevent frontal collisions. The fatigue detection system, which Volkswagen is introducing for the first time in this class, is continually active; it detects reduced driver concentration and warns the driver with an acoustic signal; a visual message also appears in the instrument cluster recommending that the driver should take a break from driving.

Another new feature on the Passat: the continually active masked main beam headlights known as Dynamic Light Assist; this is the same system as the one first introduced on the new Touareg. Dynamic Light Assist – an option offered in conjunction with bi-xenon headlights – enables continual use of the main beam headlights while driving. Via a camera, the system detects oncoming traffic and cars driving ahead and automatically masks only those lighting areas relevant to glare. The results: improved illumination of the carriageway in nearly all situations. The Passat is the first car in its class to have this system. For vehicles with conventional halogen headlights, a simpler version of automatic main beam control is available: Light Assist. A camera is also used here, e.g. to detect oncoming traffic. But the system switches over completely between main beam and dipped beam. As soon as there is no more oncoming traffic, the main beam is reactivated.

The XDS electronic transverse differential lock – first introduced on the Golf GTI – improves traction in bends. Along with Lane Assist (lane keeping assistant), which was also available in the previous model, there will now also be a Side Assist function, which uses flashing LEDs in the door mirrors to call the driver’s attention to vehicles located laterally to the rear or next to the Passat or a vehicle approaching quickly from the rear. A new, direct measuring tyre pressure monitoring system also signals potential loss of tyre pressure – individually for each wheel. The pressures of all tyres may also be displayed in the instrument cluster.

Innovative convenience systems
Other new assistance systems are essentially convenience oriented, and they significantly simplify everyday driving. They include Easy Open: If the new Passat saloon is equipped with Keyless Access (automatic locking and engine starting system), a specific foot motion behind the vehicle is sufficient to cause the boot lid to open. Anyone who has stood next to a car with both hands full knows know helpful a function like Easy Open can be. Naturally, the boot lid only opens for someone who is carrying the proper RF identification fob for the Passat. The human-machine interface here is a sensor located in the bumper area.

Also new in the Passat
The rear seat system that can be unlatched from the bootspace, a towbar that can be made to swivel out at the press of a button and side windows in noise-dampening compound safety glass. As in the new Sharan, Park Assist II will now also be offered on the Passat; this system not only can steer into parking spaces parallel to the carriageway; it can also find its way into parking spaces perpendicular to it. Last but not least, the Passat’s RNS 510 navigation system detects speed limit signs by camera and sends them to the touchscreen in the centre console.