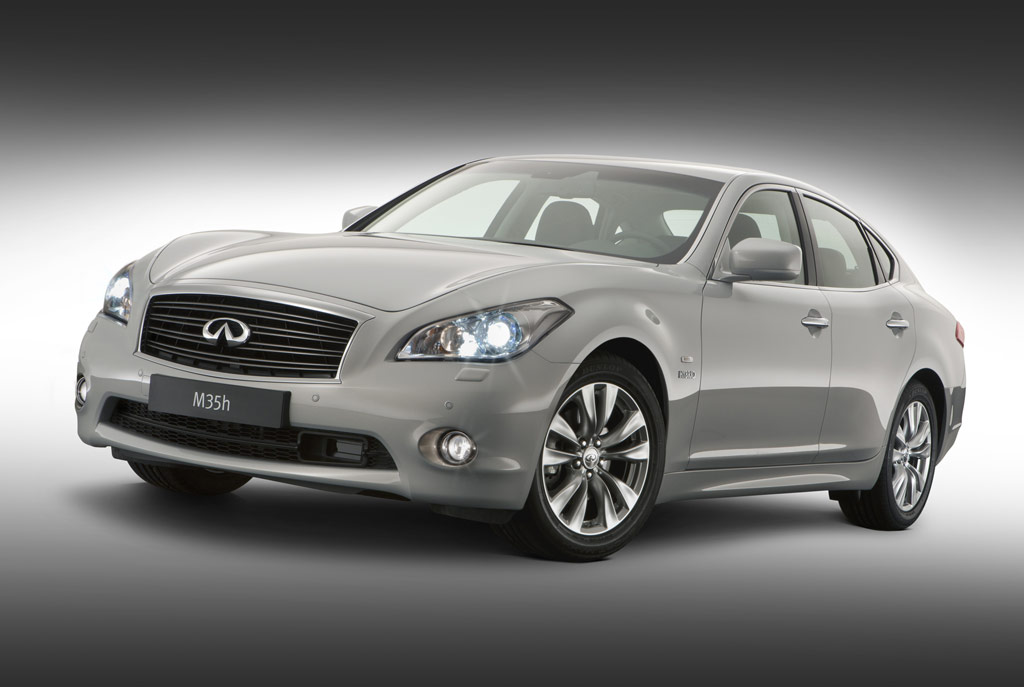 A high performance V6 sports sedan with a hybrid half that makes motoring with zero tailpipe emissions more pleasurable than ever is set to headline on the Infiniti stand at the 2010 Paris Motor Show. The production-ready Infiniti M35h stands out for all the best reasons, not least the fact that the first European deliveries are set to start next Spring when Infiniti will offer luxury sedan buyers a choice of V6 petrol, V6 diesel and V6 petrol/electric hybrid powertrain options.

They will confirm why Infiniti has dubbed the M35h “the driver’s hybrid” for its high power output, Infiniti Direct Response Hybrid technology and strong rear-wheel drive bias to looks and driving feel:

(All figures subject to final homologation)

All of this is delivered in a large (4945mm long) four-door, five-seat sedan with an exceptionally aerodynamic body complementing classic long bonnet/short tail sports saloon proportions and a flowing, muscular design penned with characteristic Infiniti passion. The spacious, soft-feel interior is inspired by natural materials, traditional Japanese crafts and high technology. The M35h will be available in base and luxury GT forms, with the top GT Premium model fully equipped as standard and featuring several class-first technologies.

Key to the M35h’s Inspired – and green – Performance is an innovative yet elegantly simple petrol/electric drivetrain which ensures zero-emissions electric propulsion is used more often, for longer periods and at higher speeds than in existing hybrids.

The M35h can cruise on electric power alone at a constant 80 km/h on a level highway. Electric mode only can be utilised at speeds as high as 140 km/h on a trailing throttle. In slow-moving traffic the M35h can silently glide on electric propulsion for up to 2 km. Tests have shown that, in mixed diving, the M35h is able to drive in electric only mode for as much as 50% of the time.

Being an Infiniti, there is never any shortage of acceleration when it is needed. The 3.5-litre petrol V6 delivers 225 kW (306 PS), backed up by 350 Nm of torque at 5000 rpm. The electric motor is rated at 50 kW (68 PS) and provides high torque from zero rpm, peaking at 270 Nm at just 1000 rpm, ensuring dynamic performance from standstill.

The M35h deploys its power in a manner entirely in keeping with Infiniti’s sports handling philosophy for maximum driver satisfaction. Both petrol V6 and electric motor deliver their power to the rear wheels via a 7-speed automatic transmission. This is notable for having an electronically controlled clutch rather than a torque converter, enhancing responsiveness and reducing fuel consumption over the M37 by up to 10%.

A new electric/hydraulic power steering system saves another 2%. The single electric motor and lithium ion battery pack boost efficiency further by helping keep the weight gain over the M37 down to about 120kg. The batteries are under the boot floor but the M35h is one hybrid sedan with practical luggage room, the boot able to accommodate four golf bags or two A-size suitcases.

On sale across Europe from spring 2011 (depending on country), the M35h joins the petrol M37 and diesel M30d as a unique three-way offering in the European executive car market. Prices and specifications will be announced in the new year.

Infiniti Direct Response Hybrid
At the heart of the M35h is a front-engine, rear-drive-only mechanical layout based around an innovative drivetrain featuring a one motor/two clutch system. The technology, which previewed in the Essence concept coupé at the Geneva Motor Show in 2009, endows the M35h with the fuel efficiency and CO2 emissions of a smaller, less powerful car alongside the linear power delivery, stirring acceleration and unsullied rear-drive handling of a true Infiniti – complete with all the charisma of an acclaimed V6 petrol engine. The system is called Infiniti Direct Response Hybrid.

Two new technologies are fundamental to the M35h’s broad-ranging abilities. One is the lithium-ion battery pack – quick to alternate between charging/discharging and, size for size, twice as powerful as conventional batteries. The second is the direct manner in which the petrol or electric power is delivered to the rear wheels. This directness is central to the M35h’s overall efficiency as well as the reason behind the consistent driving feel under all conditions.

The first (dry) clutch is installed between the naturally-aspirated 3.5-litre V6 and the electric motor and facilitates full decoupling of the V6 when the car is in electric drive and power regeneration modes. Decoupling the V6 reduces mechanical losses and boosts efficiency of the electric motor.

The second (wet) clutch is sited on the other side of the electric motor. It is packaged within the automatic transmission where its function replaces that of a conventional torque converter, in effect turning the 7-speed gearbox into an automated manual – with a cut in fuel consumption of up to 10% over an equivalent model with conventional torque converter automatic.

The electric motor is rated at 50 kW (68 PS) with 270 Nm of torque at just 1000 rpm. It acts as both propulsion unit, either alone or in tandem with the V6 when maximum acceleration is required, and also as a power generator. As well as charging the battery in the normal way, the motor recovers energy otherwise lost during deceleration and braking.

The 225 kW (306 PS), petrol engine is Infiniti’s 3.5-litre V6. It was chosen for torque characteristics (350 Nm at 5000 rpm) that perfectly complement the electric motor’s output, negating the need to install the 3.7-litre VVEL V6. The electric motor’s high torque from zero rpm provides strong step-off performance and contributes to the sporting feel at low speeds.

As well as its fast charge/discharge response and 1.3 kWh capacity, the lithium ion battery pack is laminated to enhance the cooling performance. Temperature stability is further improved by the use of manganese positive electrodes. An end result of this is exceptional battery reliability.

The bane of many hybrids – extra weight – is kept in check in the M35h by the lightweight batteries and features such as the single electric motor, replaced torque converter and innovative steering and braking systems, in addition to the strict weight-saving regime already integral to the M Line. It all helps keep the weight gain over the M37 down to about 120kg, the M35h tipping the scales at 1885kg.

The technology comes together to make a high performance hybrid that’s electrically powered for more of the time, and at higher speeds, than conventional hybrids. Tests in the USA showed that the M35h was able to drive in electric-only mode, with zero tailpipe emissions, for as much as 50% of the time over a route that included motorways and country roads as well as congested city streets.

The steering is an electro-hydraulic system with “on-demand” assistance. It offers the advantages of both types of steering – the natural and smooth feel of hydraulic power steering and the improved fuel efficiency of an electric system. The motor cuts in only when the wheel is turned, further boosting efficiency. The system is more compact and lighter than traditional power steering set-ups, a feat achieved by integrating multiple parts.

The brakes are similarly designed primarily to suit sports sedan buyers’ needs while at the same time contributing to the M35h’s lower carbon footprint. The engineers looked to the hybrid system itself for the solution. What they came up with – a way to use the electric drive motor to operate the brake cylinders – represents another world-first innovation for the Japanese brand.

The system is called Electric Driven Intelligent Brake. When the driver steps on the brake pedal, the necessary braking force is maintained while the hydraulic pressure of the friction brake is controlled to help maximize the energy regeneration of the hybrid motor. Because of its simple structure, in which the motor directly operates the brake cylinders, the Electric Driven Intelligent Brake system has the potential to be a key part of all future Infiniti Direct Response Hybrid vehicles.

The simplicity of these elegant mechanical solutions, with their emphasis on compactness, light weight and fewer parts, is made possible by advanced computerized control.

Design, interior, features
The M35h shares the seductive looks, alluring cabin and world-first features of the all-new M Line flagship sedan, already available in both M37 V6 petrol and M30d V6 diesel forms. When the M35h joins the range from next spring Infiniti will offer the only family of executive cars available in Europe with hybrid, petrol and diesel options.

The proportions are classic sports sedan, with Infiniti’s trademark short front overhang and long bonnet leading back to a coupé-like rear end. The flowing contours provide the athletic looks – and a clear link to the M’s design inspiration, the Essence supercoupé concept with its beautiful interpretation of wind and wave forms.

The design is notably aerodynamically efficient, both in terms of low drag (Cd: 0.27) and zero lift at high speeds, thanks in part to the distinctive “ducktail” design of the boot lid.

Like all the new M Line models, the M35h has been engineered for European drivers and roads. Super strong and based on the FM (Front-Midship) rear-wheel drive platform, the M35h delivers rewarding rear-drive handling matched by exceptional ride comfort thanks in part to the world-first use of double-piston dampers.

A spacious five-seat interior sets a benchmark for quality and luxury even by Infiniti’s high standards. The M35h is available in both base and GT forms, the GT coming with features like sensuous aniline leather and hand-buffed silver powder-coated White Ash wood trim.

The M35h GT is also available in Premium form. Expected to be the most popular, the GT Premium comes as standard with an array of Infiniti’s most innovative and high-tech features. These include Intelligent Cruise Control, Lane Departure Warning and Prevention and other systems comprising the Dynamic Safety Shield, along with a 16-speaker Bose® Premium Surround Sound system, Active Noise Control, Infiniti’s acclaimed Connectiviti+ information and entertainment platform comprising 30GB HDD navigation, and Forest AirTM, an innovative climate control system designed to promote alertness and relieve stress.

Prices and full specifications of the M35h will be confirmed in the new year.