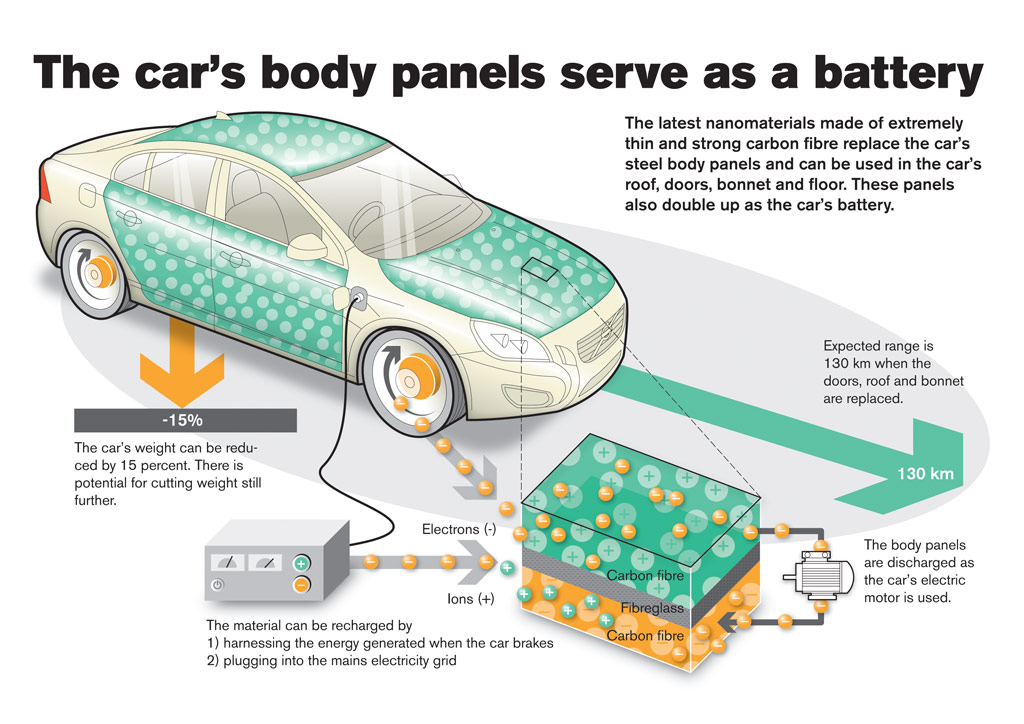 Imagine a car whose body also serves as a rechargeable battery. A battery that stores braking energy while you drive and that also stores energy when you plug in the car overnight to recharge. At the moment this is just a fascinating idea, but tests are currently under way to see if the vision can be transformed into reality. Volvo Cars is one out of nine participants in an international materials development project.

Among the foremost challenges in the development of hybrids and electric cars are the size, weight and cost of the current generation of batteries. In order to deliver sufficient capacity using today’s technology, it is necessary to fit large batteries, which in turn increases the car’s weight.

Earlier this year, a materials development project was launched by Imperial College in London that brings together nine European companies and institutes. Volvo Cars is the only car manufacturer participating in the project. With the help of 35 million SEK (approx. 3.5 million EURO) in financial support from the European Union (EU), a composite blend of carbon fibres and polymer resin is being developed that can store and charge more energy faster than conventional batteries can. At the same time, the material is extremely strong and pliant, which means it can be shaped for use in building the car’s body panels. According to calculations, the car’s weight could be cut by as much as 15 percent if steel body panels were replaced with the new material.

Volvo Cars contributes its expertise
The project will continue for three years. In the first stage, work focuses both on developing the composite material so it can store more energy and on studying ways of producing the material on an industrial scale. Only in the final stage will the battery be fitted to a car.

“Our role is to contribute expertise on how this technology can be integrated in the future and to input ideas about the advantages and disadvantages in terms of cost and user-friendliness,” says Per-Ivar Sellergren, development engineer at the Volvo Cars Materials Centre.

Initially, the car’s spare wheel recess will be converted into a composite battery.

“This is a relatively large structure that is easy to replace. Not sufficiently large to power the entire car, but enough to switch the engine off and on when the car is at a standstill, for instance at traffic lights,” says Per-Ivar Sellergren.

Immense interest in the project
Many people have visited the Imperial College website, which contains information about the project, and have seen the video on YouTube.

“Almost daily I read new ideas about how this technology could be used or further developed. The potential is enormous and it’s great that so many people are interested,” he says.

If the project is successful, there are many possible application areas. For instance, mobile phones will be able to be as slim as credit cards and laptops will manage longer without needing to be recharged.