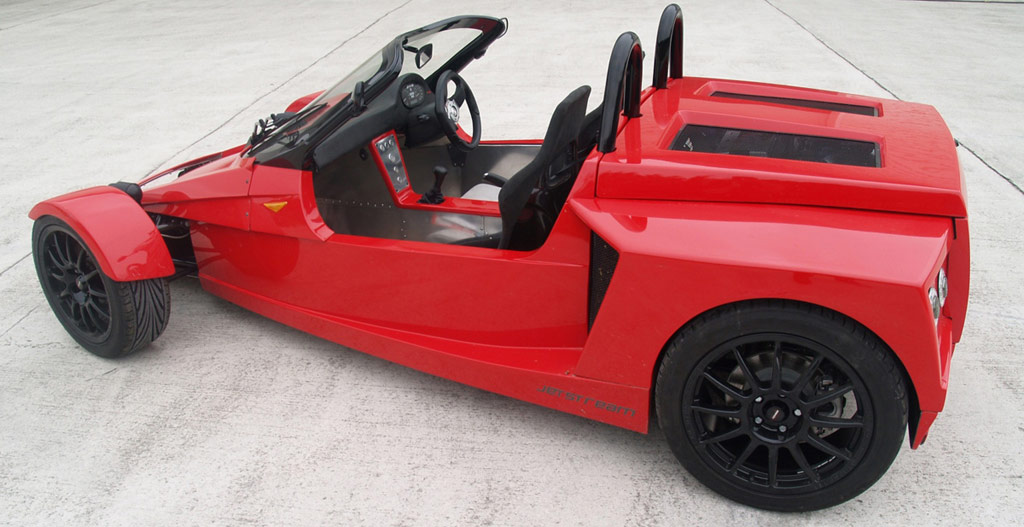 New British sportscar manufacturer Jetstream breaks into the lightweight sportscar market with their SC250 model that couples a totally unique and striking look in terms of styling with substantial performance credentials.

The mid-engined, rear wheel drive road-legal two seater SC250 is now in production after completing an extensive testing programme, following the unveiling of the prototype at the Autosport International Show at Birmingham’s NEC back in January.

Lurking under the engine cover of the SC250 is the same 2.0 litre Ecotec Turbo Twin-Cam 16-valve powerplant and smooth six-speed transmission that appears in the Vauxhall Astra VXR, producing 250bhp as standard. The engine can be run on either unleaded or bio-ethanol – the latter fuel increasing performance by around 10%. With the SC250 weighing in at a mere 700kg (1,550lb), an astonishing power-to-weight ratio of 357bhp-per-tonne (2.8kg/bhp) is achieved, propelling the car from 0-60mph (0-96km/h) in under 4 seconds and to a maximum speed of 165mph (265km/h). A quarter of a mile run from a standing start takes just 11.8 seconds. The car’s torque is also impressive, with 236lb.ft (320Nm) generated @ 2,400rpm. For a car of this performance, a combined unleaded fuel economy of 38mpg (13.4kpl) ensures running costs are not excessive.

The performance figures aren’t the only impressive features that make the SC250 a real driver’s car – the whole package has been designed and engineered to deliver the optimum high performance experience behind the wheel, whether on the road or driving to the limit on a track.

Fundamental to the SC250’s creation was the extensive use of advanced CAD (Computer Aided Design) and CAS (Computer Aided Simulation) software. Using 3D modelling to develop the original design within the SolidWorks package, this was then stress analysed using the Cosmos software programme. Simulation software was then used to create any driving situation Jetstream desired and – crucially – was used to compare the SC250’s performance against rival cars. The resulting data meant Jetstream could predict accurate reactions when the prototype was built.

At the beginning of 2008, the SC250 began extensive physical testing – at venues including Donington Park and Dunsfold Park circuits – to ensure the dynamics, handling and reliability of the car were as predicted. The testing was extremely successful and ensured that the car would be ready for production.

The extreme styling of the SC250 was penned originally by Brian Rossi, formerly of Ford, who was responsible for designs such as the “Retro” Ford Thunderbird launched in 2002. The revolutionary look of the car is as functional as it is striking. It was created to be as aerodynamic as possible to balance grip, traction and straight-line speed, with the radical hard edges and flat surfaces making the SC250 stand out strongly against its rivals.

The lightweight, hand produced composite body is coupled to an aluminium monocoque chassis with steel sub-frames front and rear. Side impact safety is aided by the honeycomb monocoque side panels that also benefit the car’s rigidity by eliminating any “flexing” of the structure.

Specially designed suspension ensures premium handling regardless of speed and road/track conditions. Both front and rear suspension consist of unequal length wishbones with fixed coil over shocks supplied by Netherlands-based Intrax, the company owned by Henk Thuis who was formerly Michael Schumacher’s suspension guru at Benetton F1, with the front mounted inboard with push rod activation.

Lightweight 16 inch alloy wheels on the front and 17 inch on the rear from Team Dynamics coupled with the exceptional grip from Toyo Proxes tyres enhance the SC250’s handling, with road legal track tyres available as an option.

The engine management system is controlled by an Emerald ECU and includes two settings –Standard (general road use) and Sports (track).

The 12 paint colours available, ranging from ‘Cornish Gold’ to ‘Rossi Red’, are exclusive to Jetstream and are produced at MIPA’s laboratory in Germany. They are water based, which means they are not only environmentally more friendly but provide a better finish and are much easier to touch up than standard automotive paints such as cellulose.

The precisely built interior cabin is designed to complement the driving experience. The custom moulded composite seats – available in two sizes – are upholstered in high-grade vinyl and can even be customised. The driver’s seat is horizontally adjustable so whether the driver is tall or short, they will be able to sit comfortably in the SC250. Willans 4 point harnesses are standard, with a 5-point version available as an option, ensuring maximum security for the driver and passenger in addition to ensuring stability when performance driving. To improve the comfort factor even more, customers can request Alcantara and leather upholstery as an option when customising their car.

The digital and analogue dash display is from SPA and is programmable to add features depending on a driver’s specific requirements.

The SC250 has also been designed to suit all year round usage with the addition of a water-fed heating system. A power point for an iPod, mobile phone or GPS system is provided as standard.

The practicalities of owning the SC250 are also more beneficial than many similar cars. Using parts from General Motors/Vauxhall, it can be serviced at almost any garage, with most parts freely available. The composite body panels are held in stock by Jetstream and can be sprayed to match a customer’s car as required – avoiding unnecessary delays in waiting for a specialist body shop to ‘patch and match’.

Jetstream’s technical director John Donnelly, whose career spans from Formula One to High Performance Replica Cars and was responsible for much of the SC250’s engineering, comments: “The first factor people notice about the car is the styling – it’s a refreshing and innovative design that is unlike anything else on the market, so it’s totally unique. The styling also serves a real technical purpose as its aerodynamic features were designed to aid road holding. In terms of driving experience, we wanted to ensure no stone was left unturned and we feel the result will appeal to drivers who really want to feel part of the car, whether on track or on the road.”

Donnelly explains that the technical team involved in production also benefits Jetstream’s production capabilities: “We’ve developed a strong team, from design through to production. Our laminating department, for instance, consists of craftsmen who honed their skills as part of the luxury yacht building industry for which the local area is famous, so the care and exacting standards they integrate into their work and the quality they produce is second to none. Additionally we plan to bring in local apprentices, via an agreement with Cornwall College, to the automotive engineering industry which brings in fresh thinking, which will aid future projects.”

Cars are now being built at Jetstream Sportscar’s 14,000 sq.ft. production HQ in Cornwall and take 6-8 weeks to build, with timing dependent on each customer’s required specification. Jetstream plan to manufacture 50 cars over the next year, with an uprated 300bhp version of the SC250 planned for early 2009.

Price is £29,495 OTR and includes a full 12 month parts and labour warranty subject to conditions, excluding any optional extras, which include a ‘Gull Wing’ style door hard top.