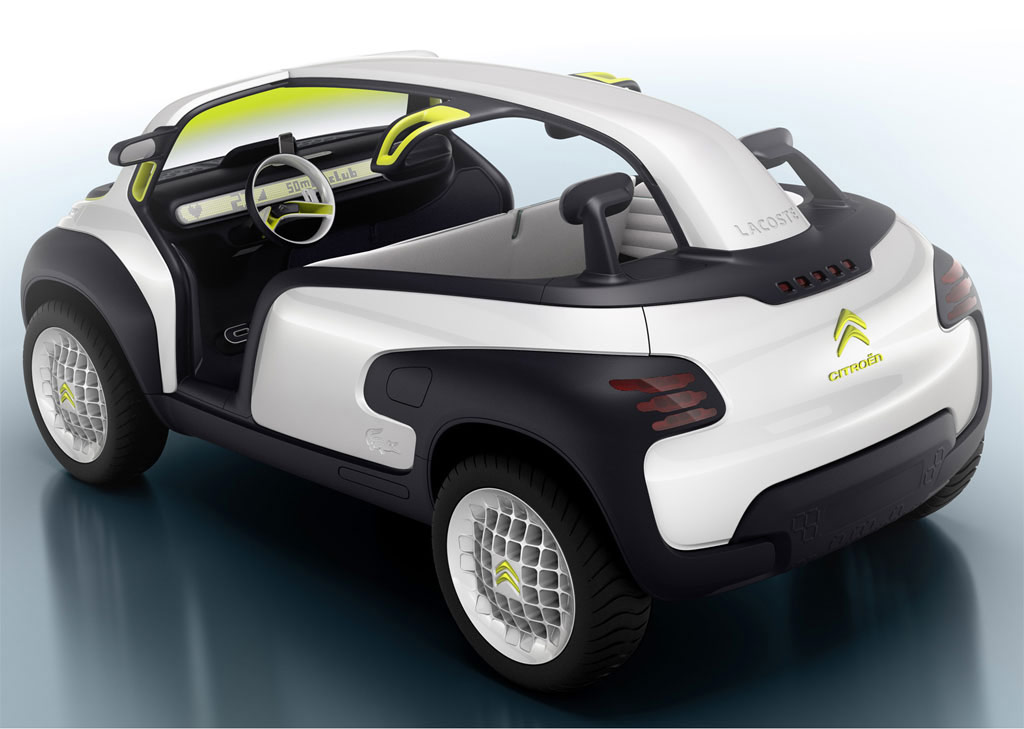 Two names, Citroen and Lacoste, have come together with a shared vision – to cultivate boldness, creativity and optimism. The result of these common values: the new Citroen Lacoste concept. To be unveiled at the forthcoming Paris Motor Show, this new model is an emblem for a state-of-mind and a lifestyle. Clearly alluding to leisure and pleasure, it takes a simplified, no-nonsense approach to motoring – without forgetting refinement – and transports passengers to a lighter, fresher world.

This new concept car is both resolutely Citroen and typically Lacoste. Positioned at the crossroads of the automotive world, where fashion and sport meet, it makes a number of references to all three sectors. The technology on board also strikes a playful note, underlining the apparent paradox between design expertise and lightness of tone.

With its strong presence and joie de vivre, the high-tech and innovative Citroen Lacoste makes car travel an all-new experience and an incomparable adventure for the senses.

Pure, simple and laid-back, while remaining sophisticated, the Citroen Lacoste takes another step forward towards the car of the future – a vehicle aimed at putting an end to the “always more” mantra that often reigns in the automotive industry. The new model also fuels Citroen’s thinking of focusing on the essentials to create original cars that are affordable and economical, while losing none of their ambition or motoring passion, notably through premium styling.

HEIGHTENED SENSATIONS
Sweeping away preconceived ideas on compact cars – with many being supposedly short on character – the new Citroen Lacoste proudly asserts that another way forward is possible.

Stylishly minimalist and elegantly laid-back, the Citroen Lacoste instantly attracts with its off-beat sports aesthetic. It features a high waistline; bulging and textured wings; minimum overhangs front and rear; and golf ball-style alloy wheels, placed in the furthest corners of the body.

After a longer inspection, it is this car’s “open” physique that appeals – promising a fulfilling drive, while expressing a wealth of inventiveness and elegance.

Passengers enjoy an open-air experience thanks to the broad cut-outs that replace the front doors and the lack of a hard-top roof. Journeys in the Citroen Lacoste inevitably heighten the senses, much more than in a protective bubble that cuts occupants off from the world. As if these intense sensations weren’t enough, the windscreen can also be lowered out of sight, providing a harmonious waistline around the entire cabin, front, back and sides.

The elegance of the Citroen Lacoste is underpinned by the choice of drivetrain. Rather than seeking enhanced driving sensations through flat-out speed, this new concept opts for a 3-cylinder petrol engine with plenty of performance on tap to power a vehicle of this size and weight. With its light timbre, the flexible, economical and ecological powerplant is a perfect match for the car’s “back to essentials” nature.

The new concept respects the environment, not only by virtue of its engine, but also its design choices. Even with its large wheels, the Citroen Lacoste seems to “embrace” rather than confront nature. This impression takes concrete form in the subtle, undulating shape of the wheels, in an approach that suggests Citroen Lacoste drivers are playing with the elements for more fun.

SPONTANEOUS APPROACH
Along with its bright and breezy approach to life, the convertible Citroen Lacoste also features taut, muscular and reassuring lines. Compact and robust (at 3.45m long, 1.80m wide, 1.52m high and with a 2.30m wheelbase), the new model expresses faultless expertise in its styling and design.

The car’s laid-back personality stems from its purity, as evidenced in the body paint in pearlescent white, which is set off by dark blue design motifs and strips underlining the forms of the vehicle.

Cabin access couldn’t be easier, since the doors have been replaced by broad cut-outs that are in perfect harmony with the body styling. Access to the rear seats is just as easy, with passengers simply jumping onto the rear bench. For transporting luggage or sports equipment, the rear bench slides handily into the boot.

The car can also be fitted with specially designed sports equipment, including tennis racquets, golf clubs, skis, a surfboard or a bike, with owners deciding on the theme of their weekends.

At the crossroads of motoring, fashion and sport, the Citroen Lacoste makes a number of references to all three worlds.The cabin contains countless storage areas for enhanced travelling comfort. The compartments are discreetly located under the dashboard and within the two bench seats – with sliding covers that echo the colour of the upholstery. The seats themselves are overstitched in white cotton, with a weave closely resembling that of a polo shirt – an iconic Lacoste design. Building on this theme, the seatbelt anchorage points have “necklines” like a polo shirt, while the seats are covered in robust, rope-like cotton.

Like a wardrobe full of different clothes, accessories and fabrics, the Citroen Lacoste plays with a range of colours and materials. For fun, simplicity and elegance, the emphasis is on bold, traditional colours like white and deep blue. The cabin is then dotted with bright – almost fluorescent – yellow splashes in the storage compartments and on the grab handles, which are finished in soft and tactile rubber, with a tennis ball-like effect.

The fun-loving Citroen Lacoste brings familiar objects to mind. Some details make reference to the sporting world of the Lacoste brand. It boasts square relief designs that resemble sections of a tennis net on several parts of its body. The fairing that rises up from the underbody, at both the front and the rear, recalls the print left by a tennis shoe on a clay court.

CREATIVE & “MAGICAL” TECHNOLOGY
The on-board technology is also of a playful nature, underlining the seeming paradox between design expertise and lightness of tone. Strictly speaking this car has no fixed roof. In its place is a T-shaped structure that extends back to the boot like a “backbone”. With several functions, this structure helps when accessing the vehicle and features an ingenious system that provides shelter for passengers. An auto-inflatable hood deploys all the way along the backbone to form a soft-top roof. In the same yellow as the grab handles, the inflatable roof ensures a light-filled cabin, come rain or shine.

Invisible at first glance, the deployment of the system makes for quite a spectacle. By choosing this inflatable hood rather than a conventional structure, the Citroen Lacoste concept remains faithful to its simple and light-hearted nature.

In much the same spirit, the fascia strip on the dashboard serves as the car’s display screen, showing driving information such as speed and the directional indicators. Messages take the form of icons with oversized pixels. This is a clear nod to the very first video games, although behind the naïve appearance lie cutting-edge technologies.

The Citroen Lacoste’s two-spoke steering wheel impresses with its minimalist design, simplicity and size. When passengers board, the wheel can be moved from its normal position and located against the upper dashboard – an ingenious way of optimising access to the front bench.

Even the front and rear lights are discreet to the point of being almost invisible. Concealed under the car’s dark blue bodywork, they can be seen only when illuminated. As well as providing visual purity, this design choice delivers a unique and almost magical sight.