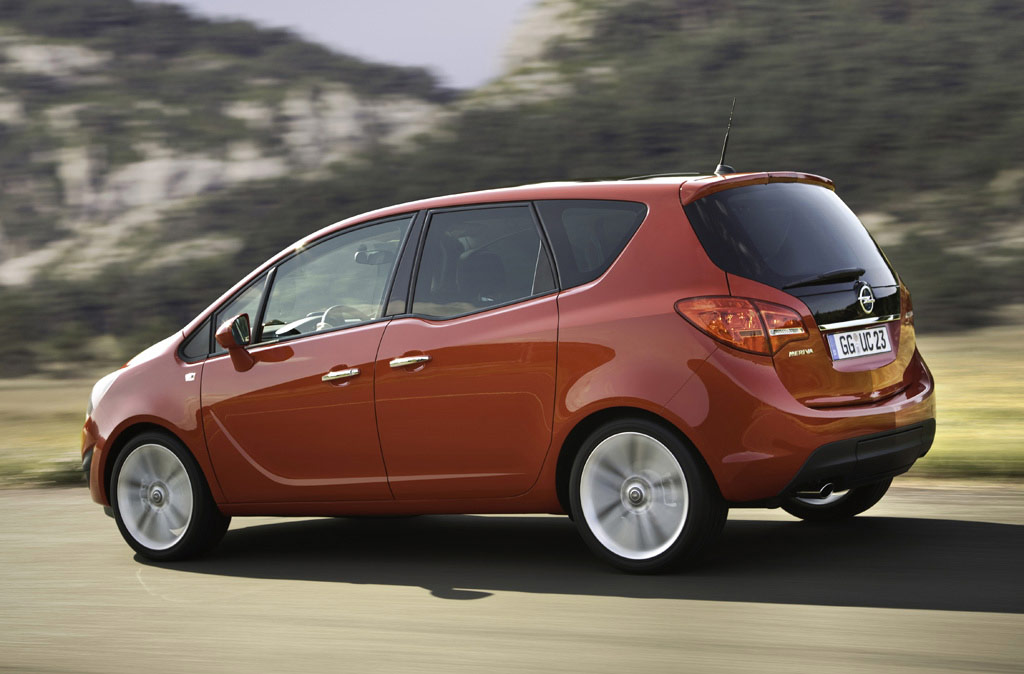 While it already makes headlines for its styling, versatility and appeal, the new flexible Opel Meriva expands its diesel powertrain line-up to bring more engine choice to families.

With outputs ranging from 55 kW75 hp to 96 kW/140 hp, customers can now choose from five diesels or three gasoline engines that suit their needs. However, Meriva flexibility is not just about its powertrain. Opel’s second-generation small monocab has been elegantly styled, with dynamic lines and sculptural shapes. And, it offers a large choice of innovative features that optimize on-board use of space.

In addition the Meriva is designed to be ergonomic so that the car and its occupants interact efficiently and safely. The flexibility champion is the first automobile ever to receive a seal of approval from an association of independent doctors and back experts, called Aktion Gesunder Rücken (AGR), for its ErgoFlex System. It consists of:

Throughout the cabin, storage space has increased largely because of the efficient use of the space in between the two front seats. This is done through the revolutionary FlexRail console system, consisting of exchangeable storage units that slide on aluminum rails between the front seats, at the most accessible place for both front occupants. The FlexRail system was made possible because of the high mounted gear shift lever and standard electric parking brake.

The exterior eliminates the boxy shape usually associated with monocabs and replaces it with a fluid silhouette and a sweeping roof line combined with sculpted volumes, like the “blade” on the front doors that brings drama and motion to the flank. The most visible change, however, comes from the now iconic rear-hinged FlexDoors, which are emphasized by the wave on the window line.

The interior never loses its functionality. The Meriva’s clever rear seating system allows the back to be quickly reconfigured to meet loading and seating requirements. Foremost is the visibility, through the high seating, and roominess, via the FlexSpace system.

While retaining the warm, wrap-around instrument panel that is becoming a hallmark of new Opel design, the designers have optimized space in clever and elegant ways. Examples of this are the new FlexRail console system as well as the storage in the front door which can hold 1.5 liter bottles. Opel also introduces a sophisticated application of colors and accents to unite urban trends in fabrics and décor. Overall, the Meriva offers up to 32 storage opportunities – from back seat pockets to under-seat drawers.

A wide panorama sunroof – the biggest in its segment – keeps the interior light and airy. This is an especially nice feature for rear passengers – important because rear seats are used much more often in this segment than in conventional sedans or wagons. A heated steering wheel is also one of those added pluses not found in this segment.

Powertrain: Down-sized and turbo-charged for efficient performanceThe major news late summer 2010 is the introduction of three important diesels, which Opel believes will account for most of Meriva sales in most European countries.

Diesel power starts with the 1.3-liter CDTI engine, which features closed loop combustion control – the first application of this advanced, fuel-saving technology in such a small engine – as well as variable geometry and a super efficient transmission. This variant comes as a new, low-consumption, low-emission ecoFLEX equipped with 70 kW/95 hp.

The 1.7-liter CDTI engine now introduced in the Meriva is available in two executions – 81 kW/110 hp and 96 kW/130 hp. The 1.7-liter is the first to feature an in-house designed D1 fully integrated diesel engine management system, strongly supporting vehicle dynamics and efficiency. Together, the improvements work to lower emissions, improve fuel efficiency and keep noise and vibrations at a minimum. At the same time, they deliver a ride that is smooth and comfortable.

The full diesel line up:

All engines comply with the Euro 5 emissions standards. All diesel engines include particulate filters as standard. Opel’s Start/Stop technology, now already fitted on the Agila and Corsa models and soon in the Astra, will be extended to the Meriva range next year. An LPG-version also will come in 2011.

Meriva: the name of a pioneer

Opel created a new market segment for small, affordable monocabs when it launched the first generation Meriva in 2003. With its first generation FlexSpace rear-seating system, high seating position and roomy cabin, it consistently led the segment throughout its lifecycle not only in sales – it has sold more than a million units – but also in quality. The Meriva had the lowest defect rate among 113 different models checked by Germany’s TÜV in 2007.

The second-generation Meriva which premiered in Geneva March 2010 continues to exceed expectations: Though it only hit dealer showrooms in June, Opel has received more than 60,000 units by the end of August. The new Meriva is produced in Zaragoza, Spain.