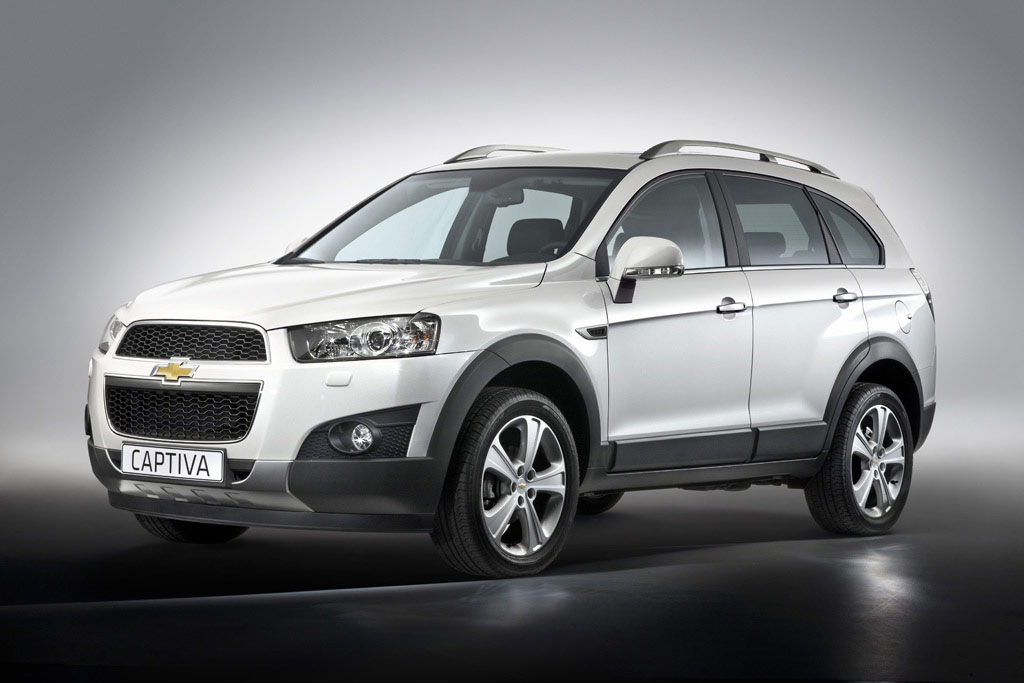 The new Captiva SUV will be seen for the first time at the Paris Motor Show, sporting a new front end design, a range of enhancements to the interior and new engines and transmissions. Captiva will be one of four Chevrolet world premieres. Captiva is Chevrolet’s full-blooded sports SUV with confident and dynamic new styling and active on-demand all-wheel drive system that distributes power as needed. At the same time the new Captiva retains the advantages of its adaptable, theatre-style seating in three rows which comfortably accommodates up to seven passengers.

The Captiva has won many friends for its exterior design since its launch in 2006, and with the new model it just got even better. A number of features are immediately noticeable when viewing the new Captiva from the front, adding up to its athletic stance: the re-shaped and sharply sculptured hood, a new larger grille with its dual-opening and the Chevrolet ‘bow-tie’ sited proudly in the middle, and the prism style headlamps and integrated LED turn signals on the outside rearview mirrors.

Moving round to the front fenders, the side air-vents now take on a more angular shape to emphasize the new Captiva’s sporting intent, while from the A pillars back the Captiva retains its handsome profile, characterized by a sleek, rising shoulder line.

Setting the new Captiva’s body off perfectly are the new exterior color palette and the accentuated wheel arches which will accommodate wheel sizes of 17 to 19 inches.

It’s under the Captiva’s new hood that many changes are also taking place, with no less than four new powerful engines that will come standard with a new manual or automatic six-speed transmission for a powerful, smooth ride. The new engine line-up, which is comprised of two gasoline engines (2.4L and 3.0L) and two turbo-diesel variants (2.2L), incorporates a host of advanced technologies aimed at delivering an optimal balance of performance and fuel economy.

With the introduction of a new 3.0 liter 258 hp V6 gasoline engine with direct injection and variable valve timing, the Captiva will be one of the most powerful compact SUVs on the market, while the new 2.2 liter common rail turbo-charged diesel units will be available with either 163 or 184 hp outputs. Rounding off the new line-up is a 2.4 liter dual overhead cam gasoline unit with variable valve timing, rated at 171 hp. Both, the 2.2 liter turbo-diesels as well as the 2.4 liter gasoline engine can be ordered in front- or all-wheel-drive configurations.

Climb aboard the new Captiva and driver and passengers will still be welcomed by that airy and spacious interior, with storage space that is among best in class and with the option of either 5 or 7 seats.

The Captiva’s upgraded interior now features an array of new finishes and textures including all-new seat fabrics and interior décor appointments to give the car a more up-market feel and look. Designers have put to good use some of the elements featured on other new Chevrolet models, such as the ice-blue back lighting and the ‘wrap-round’ design of the front fascia which flows into the front driver’s and passenger doors creating the dual-cockpit look.

The new Captiva features Hill Start Assist, eliminating “roll-back” on hills and an electric park brake that opens up space for further storage in the center console, including two 1-liter cup holders.

The new Captiva’s audio system includes Aux-in, USB-port and Bluetooth connectivity. Passengers will enjoy their audio experience all the more thanks to improved acoustic engineering resulting in reduced road, wind and engine noise. Captiva can be ordered with a touch-screen navigation system with rear view camera for parking assistance.

Captiva offers a lot of SUV for its price: powerful, yet efficient engines, all-wheel drive capabilities, roominess and versatility for up to seven passengers. Its launch in Europe is scheduled for spring 2011.