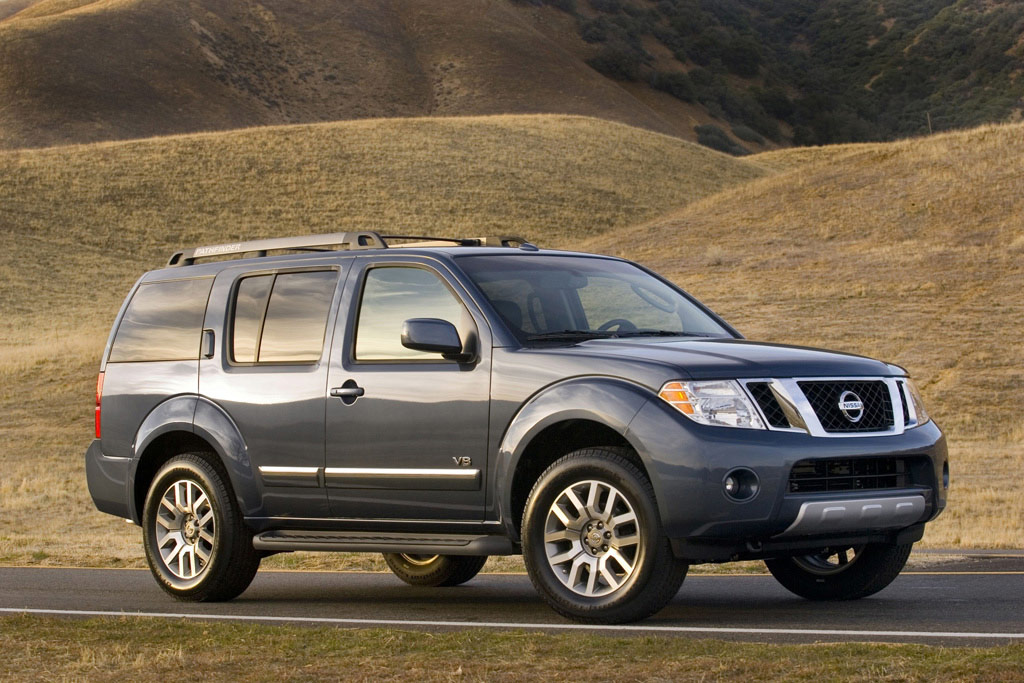 “We’re looking forward to a successful year with Pathfinder, Xterra and Frontier,” said John Brancheau, vice president, Marketing, Nissan Division, NNA. “Every customer need is met in the functionality of the Pathfinder, the iconic appeal of the Xterra, and the great value proposition of the Frontier.”

Manufacturer’s Suggested Retail Prices (MSRP) for the 2011 Nissan Pathfinder include:

2011 Nissan Xterra Pricing
Xterra is offered in three models, including the new PRO-4X. Each is equipped with a standard 261-horsepower 4.0-liter V6 and choice of 5-speed automatic or 6-speed manual transmissions (X model not available with 5MT). The Xterra PRO-4X is offered in 4X4 only, while Xterra X and S models are available in 4×2 and 4×4 configurations.

Manufacturer’s Suggested Retail Prices (MSRP) for the 2011 Nissan Xterra include:

About the 2011 Nissan Pathfinder
Twenty-five years after the introduction of the original Nissan Pathfinder, it remains in a class of its own – still authentic, still offering first-class style and surroundings and still a great value. Nissan is celebrating the milestone with the introduction of a new 2011 Pathfinder Silver Edition model, which comes complete with special features and equipment including 17-inch machine-finished aluminum-alloy wheels, Bose® audio system with 10 speakers, XM® Satellite Radio (XM® subscription required, sold separately), Bluetooth® Hands-free Phone System, Nissan Intelligent Key™, heated front seats and leather-appointed interior. The Silver Edition is offered with V6 engine, 5-speed automatic transmission and a choice of 4×2 or 4×4.

About the 2011 Nissan Xterra
Often copied, never equaled, the tough, essential Nissan Xterra continues in 2011 as a vehicle designed to inspire and facilitate outdoor enthusiasts’ activities wherever they go. Xterra remains a “class of one,” combining power, utility, value and authenticity.

For 2011, Xterra is available in three well-equipped models – X, S, and PRO-4X –making it easy for buyers to determine the exact Xterra model for their particular needs and lifestyles. All Xterra models feature an advanced 4.0-liter DOHC V6 engine, rated at 261 horsepower and 281 lb-ft of torque, along with a rugged “F-Alpha” truck platform for adventure-ready performance. The “F-Alpha” platform is shared with the full-size Nissan Titan pickup and Armada SUV. Xterra is available with a choice of 6-speed manual (S 4×4 and PRO-4X 4×4 only) or 5-speed automatic transmissions, and in a choice of part-time 4-wheel drive or 2-wheel drive.

About the 2011 Nissan Frontier
The Nissan Frontier, a no-compromise pickup forged with premium hardware, extraordinary power and off-road athleticism, continues to be a leader in the mid-size truck segment. Updated in 2009 with a new front fascia, grille and headlight design and available wheel designs, the changes for 2011 focus on revised model and option availability. The previous Frontier XE model is now the Frontier S, the previous SE is now designated Frontier SV and the previous Frontier LE is now the Frontier SL model. The 2011 Frontier model lineup now consists of Frontier S, Frontier SV, Frontier PRO-4X and Frontier SL (Crew Cab only). It is offered in both King Cab and Crew Cab body styles, in 4×2 and 4×4 driveline configurations.

Frontier continues to offer an exceptional level of on- and off-road performance with the use of a 4.0-liter DOHC V6 engine providing ample horsepower, torque, towing and payload capacities. At 261 horsepower, the 4.0-liter V6 is the most powerful in class. A 152-horsepower 2.5-liter inline 4-cylinder engine is also available (King Cab only).