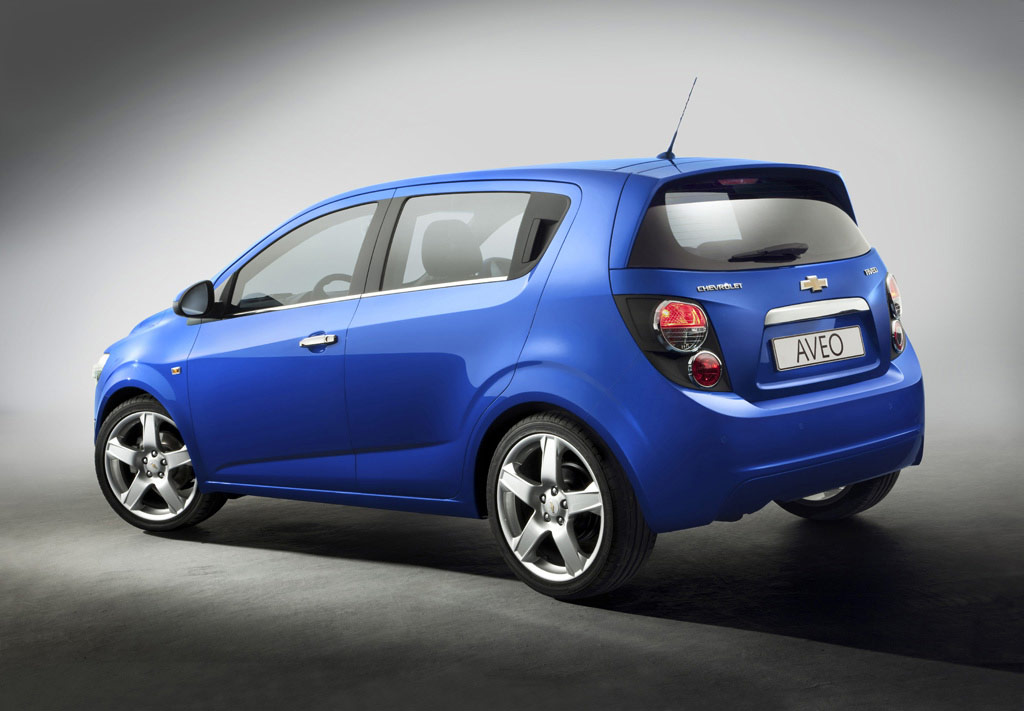 There is no shortage of world firsts for Chevrolet at the forthcoming Paris Motor Show, and joining the Orlando MPV and Cruze hatchback show car will be the eagerly awaited Chevrolet Aveo 5-door, which like the Orlando makes its world production debut.

The Aveo RS show car was displayed at the Detroit and Geneva motor shows earlier in 2010, and with the final production-ready model, Chevrolet has a car that looks every bit as good as the earlier concept.

Entering the highly competitive global small car segment, striking design elements of the new Chevrolet Aveo include the aggressive looking front with its exposed twin-headlamps and dual port grille, compact taut body panels with a rising shoulder line and short rear overhangs, the ‘hidden’ rear door handles which now feature in the c-pillar and a ‘body in, wheels out’ profile which is now very much part of the new Chevrolet design language.

Reminiscent of the recently introduced Spark, the new Aveo is unquestionably a car that will appeal to younger customers with its sporty hot-hatch look. A four-door sedan variant will launch alongside the hatch next summer. Both hatch and sedan are practical small cars with good interior space and Chevrolet expects the new Aveo also to appeal to families, for whom the current model has been a popular purchase.

The new Chevrolet Aveo has benefited from an extensive development program, resulting in a small car that will meet European drivers’ tastes both in terms of design and dynamics. Final specifications of the new Aveo will be carefully tailored to each European market.

“It’s just such an exciting time to be at Chevrolet; not only do we have new entries into the MPV and compact classes, in Aveo we have a car which is ready to compete against the best in the small car segment, which is also Europe’s largest segment.”

The new Aveo is longer and wider than the current model, giving it a spacious interior and cargo volume that is among best in class. The interior design perhaps holds even more surprises than the outside, in particular the motorcycle-inspired instrument binnacle which features an analogue tachometer combined with a digital speedo and warning lights.

Up-market blue backlighting features on the center console while the whole of the front cabin is enveloped in a wrap-round fascia. This can be color-coded and flows from the dash into both the driver’s and front passenger’s doors. Aveo customers will appreciate the quality materials used in the interior as well as multiple storage spaces in the center stack and the modern audio system with USB, aux-in and Bluetooth functionality.

Reflecting the little Chevrolet’s sporty personality, Aveo has been engineered to provide involving handling, a characteristic which stems partly from its tight body frame integral (BFI) structure where high torsional rigidity has been achieved – among the stiffest in the small car segment.

The new Aveo’s chassis has been fine tuned to satisfy European tastes with a ride and handling ratio that combines comfort with responsiveness. Electronic power steering (EPS), Electronic stability control (ESC) and ABS brakes will be standard.

A comprehensive range of four cylinder petrol and diesel engines will be available in the new Chevrolet Aveo, incorporating the latest technologies such as variable valve timing, double continuous variable cam phasing and common rail fuel injection for the diesels.

Chevrolet’s first 6-speed automatic transmission on a small car will feature on the Aveo 1.4 and 1.6 as an option in most markets; manual transmissions are of 5 or 6 speed depending on engine choice.