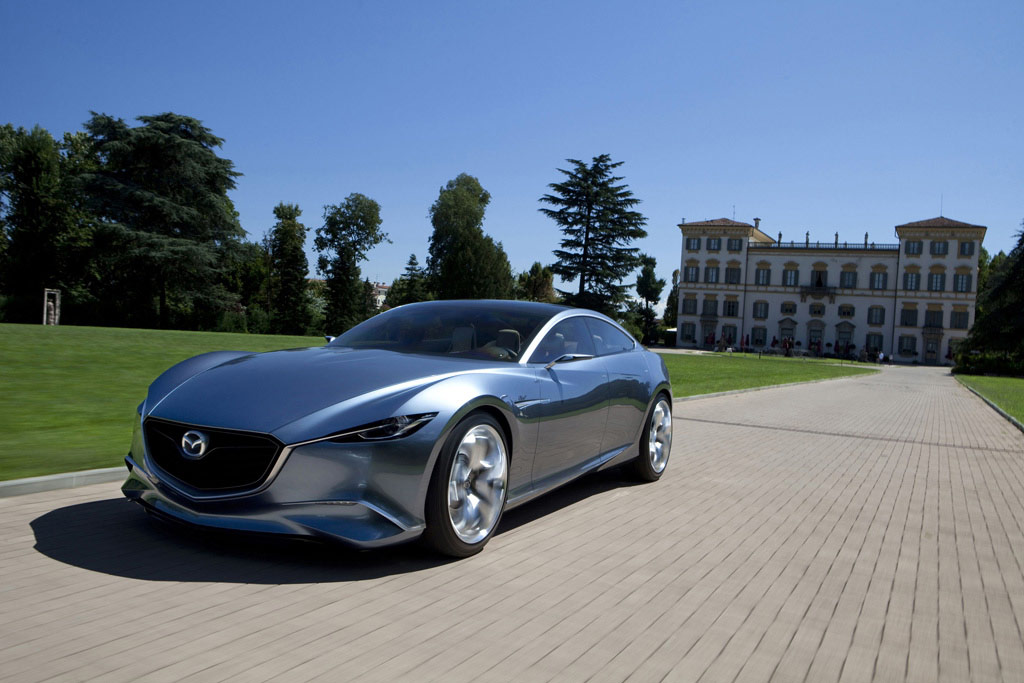 The Mazda SHINARI is a pure design concept model of a four-door, four-seater sports coupe which perfectly expresses the ‘KODO – Soul of Motion’ design theme in a graceful and carefree form.

The Japanese word shinari describes the powerful yet supple appearance of great resilient force when objects of high tensile strength, such as steel or bamboo, are twisted or bent. It also refers to the appearance of a person or animal as it flexibly transforms its body to generate a fast movement. Within this movement, Mazda designers discovered the potential to realize ‘KODO – Soul of Motion’.

One glance at SHINARI stirs the emotions. Its form expresses the powerful movement of a lean body with highly developed muscles, supple but at the same time filled with tension. Mazda’s desire is to reach car lovers’ hearts and go beyond the notion of rational logic. This form purely embodies that desire.

Designer’s challenge
Yasushi Nakamuta, the chief designer who led the design of the third generation Mazda MX-5, was the first to begin the ideation of the SHINARI concept:

“The challenge for us was to create an innovative new expression for energetic and powerful movement; something that we had never attempted before. We began by developing the design around the image of a predator, as it strikes at its prey, or the stabbing movement in kendo, Japanese fencing, to express the instant where accumulated force is released.

Translating this initial moment of ‘instantaneous movement’ being pursued by Mazda design into the SHINARI concept car presented various challenges to both the designers and the modelers working on the project. The process involved a series of activities that saw the team draw inspiration from a variety of places. This included each team member creating sketches and freely sculpting models from clay to represent their own perceptions of ‘KODO – Soul of Motion’. It then continued with the exploration of the functional beauty seen in traditional Japanese crafts and the motion witnessed in Japan’s ancient martial arts.

As the team continued this exploratory process, Nakamuta focused on a force so powerful that it can bend a strong section of steel plate. The Mazda SHINARI design adds subtle twists and tension to create forms that express agile and powerful movement, resulting in the expression of ‘KODO – Soul of Motion’.

Exterior – unbridled expression of agile movement
With an image of strength emanating across every panel and component, the Mazda SHINARI looks ready to leap at any second. The strong backbone running through the body, the sudden release of pent-up energy, and the interplay of beautiful, supple movements – this form is the expression of all of these elements.

The appearance of the A-pillar, which tapers towards the rear of the body, the shape of the cabin, the front fender; these and SHINARI’s other elements combine to create proportions that suggest the instantaneous release of energy to propel the car forward.

The distinctive front fenders represent the further evolution of the prominent fenders introduced in the RX-8. They emphasize the front wheels and accentuate the dynamic movement expressed in the side of the body, in a style that is both sporty and elegant. Character lines flow rearward from the front fenders and meet those traveling forward from the rear fenders in a multi-layered effect. This fusion creates an appearance that suggests a forceful sense of tension with a graceful beauty.

All of SHINARI’s body surfaces appear as if constantly undergoing transformation. There is no static shape to be found, as if the car is in perpetual motion. For instance the subtle control of the angle of the upper surface of the side sill, from the front to the rear, results in a form that suggests a flash of speed along the body of the car.

The three-dimensional sculpting of the front grille proudly emphasizes the Mazda lineage. A powerful line of movement originates at the grille and continues through the bonnet, fender, front lamp modules and bumper. In particular the floating bar – which links the grille with the headlights – is a three-dimensional expression of speed, an accent that represents a new signature element for Mazda. For the headlights, Mazda’s designers have created a headlamp structure with no outer lens, exposing the deep-set lights and suggesting the eyes of a wild animal about to pounce on its prey.

Aerodynamic performance was a major priority for SHINARI, and the centre of the lower sections – on both the front and rear bumpers – are designed to optimize the flow of air along the underbody of the car. The flared line that connects the front bumper with the side sills and rear bumper, fulfils a similar role and streamlines the flow of air along the body, while further contributing to the aerodynamic performance of the car.

The outer mirror, wheels and tailpipes accentuate the sense of agility and lightness and convey a hand-made feel with a human touch which contributes to the impression of superior, premium quality.

For the body colour a luminous metallic blue has been chosen to convey an image of hard metal. The strong yet elaborate brilliance of the highlights combines with the clearly defined contrast of the shadows to create a balance between the sharp, three-dimensional form and the appearance of surfaces bending and transforming; a balance which was a design objective. The fierce, bright flash of the forged steel of a Japanese sword is combined with wisdom and sensuality to express superlative quality.

Interior – Exploring a new approach of oneness between car and driver
When creating the SHINARI concept interior Mazda’s objective was to design a distinctive premium cockpit that incorporates its interior DNA. While the exterior design can be appreciated through motion, the interior, meanwhile, is experienced in a static, seated position. A commitment to essential mechanical function and excellent ergonomics has created a driver focused interior that embodies the ‘ultimate athletic space’ while expressing a sense of speed inside the vehicle.

Entering the vehicle your eye is immediately drawn to the driver focused cockpit which surrounds the driver. Its angle and surface movement sets the tone for the whole of the interior. The highlight of interior is a surfacing between the upper and the lower instrument panel which is contrasted by crisp surface edges and precision mechanical details. Interior craftsmanship is characterized by the use of bright trim work integrated along the cockpit’s perimeter and accentuating the sensation of speed. An authentic application of materials including machined aluminum, soft natural leathers and the precision design of instrumentation and controls, gives the interior an alluring quality that exceeds expectations.

Craftsmanship meets total car control
Mazda design wanted to re-define the proximity of the driver to the instrumentation and controls by establishing intuitive ‘reach zones’; what Mazda calls ‘dedicated driving ergonomics’. All instrumentation and controls have been designed and positioned to enhance the driving experience. By separating the instrument panel into two individual zones, the driver cockpit is isolated from the rest of the interior and allows the driver to focus on the task of driving. To reinforce the message of driver orientation, the design of the primary and secondary instruments echo the main cockpit shape, to provide a clean uncluttered view from the driver’s seat. Seated behind a thick-rimmed, three-spoke steering wheel the driver sits within a uniquely contoured seat, providing maximum comfort and support.

The main dashboard surfaces are positioned low, and away from the occupants, creating a unique sensation of openness. The HMI interface and the dedicated seating controls for the front seat passenger represent a new level of detail and functionality for a Mazda premium interior. Even though the interior volumes have been rearranged in this way there is a high level of sportiness to enhance the feeling of driving dynamics.
SHINARI represents the profound connection of driver and machine and the beginning of Mazda’s latest design theme ‘KODO-Soul in Motion’. SHINARI exhibits a functional aesthetic that will continue to evolve as Mazda continues to define its next generation of vehicles.

The quest for a Mazda original and a Japanese original

With SHINARI as the first step, Ikuo Maeda, general manager of Mazda’s design division, aims to create original Mazda designs that will be recognized around the world. He summarizes his resolve in the following words:

“Further, I consider it vitally important to have an awareness of Japanese originality in designing cars for Mazda. This is not merely about incorporating traditional Japanese elements into car design. I believe in reflecting the Japanese spirit in car designs as part of a subconscious practice. So, while I consider where this may lead in the future, my plan is to create cars that will be instantly recognizable as a Mazda, even when viewed at a distance. My ultimate goal is to create a brand presence that car lovers around the world recognize as representing both Mazda originality and Japanese originality. Future Mazda’s will move people physically and emotionally – this is ‘KODO – Soul of Motion’”