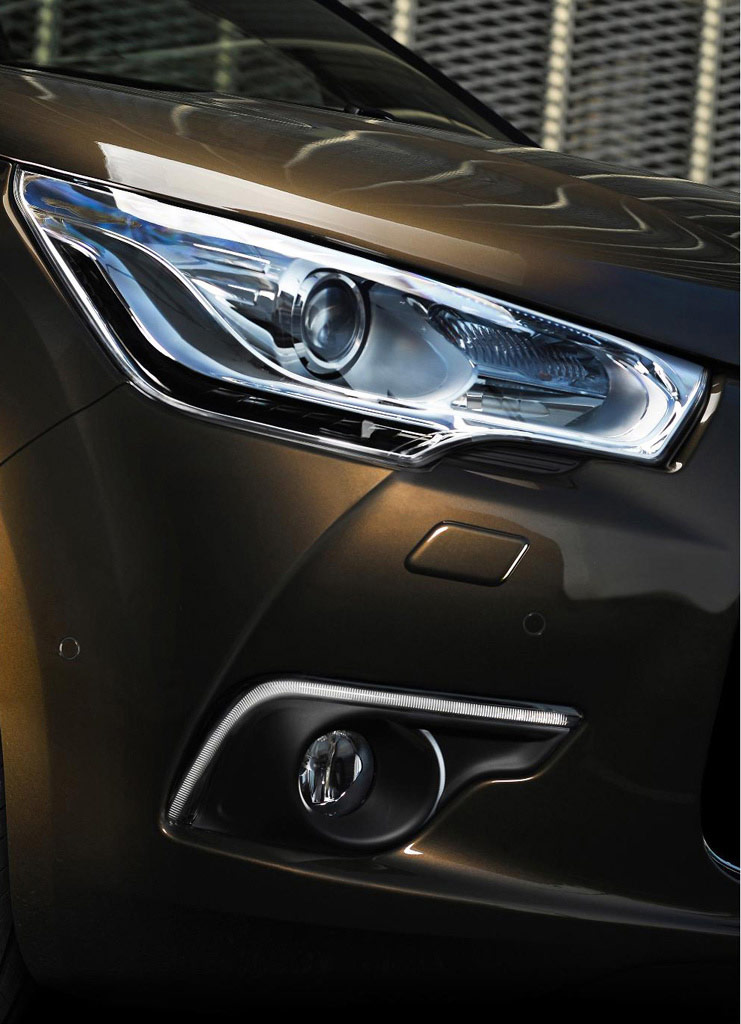 Citroën has released first details for the new DS4, a unique and attractive blend of creativity, dynamism, exclusivity and versatility. DS4 is the second model in Citroën’s distinctively-styled DS line.

DS4 brings an alluring mixture of premium design codes and a bold approach to automotive styling, with an emphasis on driving pleasure and advanced vehicle architecture. DS4 is a model with a multitude of talents, effortlessly responding to a broad range of owner needs, while enhancing the appeal and vitality of the motoring experience.

DS4 delivers a new “at-the-wheel” experience with unrivalled driving sensations and outstanding agile on-road handling. With its slightly raised stance and taut lines, DS4 is a unique and eye-catching addition to the segment.

Finely crafted to convey a prestigious presence both inside and out, DS4 offers meticulous detailing from carefully applied chrome touches to premium cabin materials – such as the finest quality leather seats. A large panoramic windscreen, offering enhanced occupant visibility, illuminates the driver-focused cockpit, creating a bright and welcoming environment.

Compact and muscular, the DS signature on the bonnet is complemented by a striking LED light signature around the front fog lights. The LEDs are illuminated both day and night. The eye-catching profile, featuring a chrome-finished waistline surrounding dark tinted windows, is enhanced by muscular wheel arches – that emphasise the large wheels (up to 19”) – and is crowned by a tautly drawn roofline with a spoiler for added vitality. The lower part of the rear bumper is finished in chrome and the horizontal detailing on the rear light clusters highlights their innovative boomerang design.

DS4’s cabin is dominated by the large panoramic windscreen that extends backwards into the roofline. Offering up to 45° of upward vision, the panoramic glazed area combines with DS4’s slightly raised stance, to provide optimised visibility for the driver, with a bright yet intimate, airy cabin environment for passengers.

Allowing owners to personalise the interior, DS4 is available with a choice of five leather combinations, including two-tone options. Range-topping models are also equipped with high quality leather on the dashboard and door panels – complete with a ‘Bracelet’ design on the seats, evoking the links of a watch strap.

For an added touch of luxury, there is chrome detailing on the air vent surrounds, instrument cluster, gear lever and parts of the central console. Aluminium pedals, embossed leather door handles and ambient lighting are further evidence of DS4’s attention to premium detail.

NATURALLY DYNAMIC & AGILE
With its high-set, taut and agile stance, DS4 is tuned for dynamic performance, appealing to drivers looking for an involving motoring experience.

“We really wanted drivers to feel like they have the road at the tips of their fingers”, says Jérémie Maestracci, DS4’s project manager.

On the road, DS4 exercises exemplary control, giving occupants a reassuring sense of safety in all circumstances. Fitted with a MacPherson type suspension assembly at the front, a flexible transverse beam at the rear and hydraulic steering with an electric pump unit, the platform is a tried and tested solution tailored for the distinctive set-up of the car.

DS4 will be launched with a choice of five refined and highly efficient Euro 5 engines. The two HDi diesels – an HDi 110 (also available as an e-HDi version) and an HDi 160 – are both fitted with Citroën’s Diesel Particulate Filter System. The three petrol powerplants – VTi 120, THP 155 and the new THP 200 – were co-developed with BMW. The new THP 200 – based on the 1.6-litre engine – delivers flexible power delivery and performance thanks to its power output (147kW), plentiful torque (275Nm at 1,700rpm) – with low CO2 emissions of just 149g/km. All engines are available with manual or EGS six-speed gearboxes.

Special attention has been given to the car’s internal acoustics, retaining the refined atmosphere on-board by minimising engine vibration, wind and road noise. This has been achieved by specifying a laminated panoramic windscreen with damping film, fitting additional sound absorbent material around the engine compartment and enhanced sealing barriers on the body and doors.

EXPERTLY EFFICIENT
DS4 was designed from the start to have a reduced environmental footprint – especially evident in its construction – by using top-quality components, an ecologically focused manufacturing process and the use of ‘green materials’ – around 15% of the 200kg of plastic used in DS4 vehicle is derived from ‘green materials.’

DS4 can be specified with Citroen’s micro-hybrid e-HDi technology, which is available from launch on versions powered by the HDi 110 engine.

The e HDi system comprises of:

All required features such as the radio, air-conditioning and steering functions remain in operation when the engine is stopped by the system. This innovative technology can reduce the fuel consumption and CO2 emissions by as much as 15% in built-up urban environments.

DAY-TO-DAY PLEASURE
DS4’s compact exterior belies a spacious and luxuriously comfortable cabin, which can be easily accessed by the car’s 2+2 door layout. To make it easier to access the rear seats – often seen as a weak point for some sporty models – DS4 features seamlessly integrated rear doors with handles hidden in the door frames.

Thanks to its optimised design, the front doors of DS4 have been made narrower and lighter, making them easier to open and close, promoting easy access at the front.

Another asset in terms of versatility and roominess is DS4’s 370-litre (VDA) boot, which is similar in volume to that of many conventional saloons.

DS4 also has numerous storage compartments for extra travelling comfort, including a large, well lit glove box; door pockets big enough for 1.5-litre bottles; and even a drawer under the front passenger seat. The intelligent architecture of the high-level central console (available on models fitted with EGS) also provides spacious storage areas. The largest of these – which is cooled, illuminated and protected by a sliding cover – can hold up to four 50-cl bottles and houses a connectivity area with an audio-jack, a USB port and a 12-volt socket. The large compartment located under the front armrest also features an additional power source.

Another example of the tailored DS4 experience, drivers can select their own on-board ambience from four ranges of polyphonic sounds – Classic, Crystal Symphony, Jungle Fantasy & Urban Rythmik -for alerts and reminders; select from three air-conditioning flow levels – soft, average & intense; and choose from an array of colours for the instrument panel – spanning from white to blue.

Drivers can access all key driving and comfort controls – which are clearly visible and even backlit for night-time use – without taking their hands off the wheel.

For complete peace-of-mind, DS4 is also equipped with a range of safety-enhancing technologies: