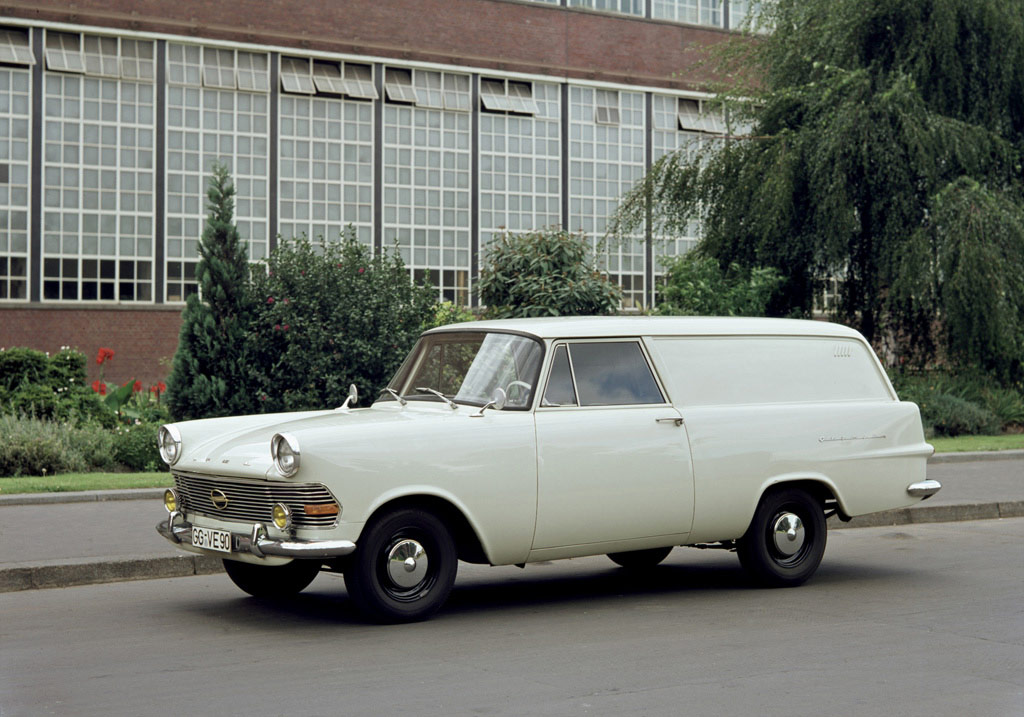 One car, four variants. No other model line in the mid-size class at the start of the 60’s was as diverse as the Opel Rekord P2 launched in 1960. Alongside two and four-door sedans, Opel, a pioneer in the field of station wagons since 1953, also offered Caravan (station wagon) and delivery van versions and, from 1961, for the first time a coupé bodystyle. With optional “luxury“ appointments for the sedan and the coupé powered by a 44 kW/60 hp, 1.7-liter S-engine, Opel was aiming at new customer target groups who valued comfort and sportiness in this vehicle segment. Sales success proved the company right: with 786,411 vehicles (including 32,026 delivery vans) produced between 1960 and 1963, the Opel Rekord P2 became the biggest-selling car in the mid-size class. For a time it also occupied the number two position in the German car registration charts.

Rekord P2 – “A car just as you like it”
About 200 journalists from daily newspapers, trade journals, radio, television and weekly news round-ups attended the premiere of the new Opel Rekord at Rüsselsheim’s civic center in August 1960. Compared with its popular predecessor, the Olympia Rekord P1 produced from 1957 to mid1960, the new Rekord P2 had a fashionable trapezoidal shape and was also more restrained in the lines of the body. (The ‘P’ designation stood for the most important styling feature of both model series, the panorama windshield).

“The slight bulging, curved shape and lines have been replaced by a striking emphasis on the horizontal,” said a press release at the time. “For the design of the new models, Opel started with the interior. Its dimensions were established before the body was formed.”

Within almost identical exterior dimensions, passenger and luggage compartment space had been enlarged. For the first time, passive safety elements, such as a steering wheel with a lowered hub and a padded upper dashboard, were key priorities for the new vehicle’s development engineers.

Alongside the two and four-door P2 sedan, there was now also an exceptionally versatile Caravan version with a fold-down back seat. In 1953, Opel was one of the first German manufacturers to introduce a station wagon variant in the previous Olympia Rekord. The P2 fast delivery van was based on the Caravan, with enclosed rear bodywork instead of side windows. It was aimed at tradespeople and small businesses. “The new Rekord – a car just as you like it,” promised the advertising.

The Rekord P2 had a three-speed manual gearbox as standard with the shift lever on the steering column. A four-speed unit, available from spring 1962, and a semi-automatic “Olymat” transmission were optional extras. The standard engine was a four-cylinder, 1.5-liter “short-stroke” motor developing 38 kW/50 hp. The stronger 1.7-liter version, with 40 kW/55 hp, was available for a surcharge of 75 Deutschmarks.

“Rekord Coupé – a loveable car”
Opel surprised the car world at the IAA in 1961 by revealing a new P2 model variant. For the first time in the history of the Opel Rekord, it now also included a factory-built coupé bodystyle. The two-door coupé had a stand-alone appeal and featured luxury appointments as standard, including fresh-air-heating, individual seats, velour carpet, headlight flashers, reversing lights and a two-tone horn. The 44 kW/60 hp, 1.7-liter S-engine could accelerate the Rekord P2 Coupé up to a top speed of 140 km/h.

“Rekord Coupé – a loveable car” was the advertising slogan used by Opel for this elegant and sporty model. In all, 33,816 customers bought the Coupé which provided the inspiration for a whole new genre of vehicles at Opel. Coupé versions of the Kadett and later Rekords and Commodores were to become permanent fixtures in Opel’s product programs.

Rekord “L” – “Premium class luxury and performance”
A top-of-the-range model for the P2 series was introduced in June 1962. As with the Opel Captain, at that time the best-selling six-cylinder car in Germany, a luxury “L” version of the Record sedan was now available. It was fitted as standard with the 44 kW/60 hp, 1.7-liter S-engine from the coupé,, the optional four-speed gearbox, heating, individual seats which could be folded down, decorative wheel trims, a chrome exhaust pipe cover and much more. The price for the “premium class luxury and performance” was 7,935 Deutschmarks, while a standard, four-door P2 sedan carried a price tag of 6,960 Deutschmarks.

With the arrival of the Rekord P2, Opel became a popular brand for the car-buying public. In the mid-size class the Rekord was first choice, and in the car registration statistics it remained for a long time in second place. By the time the P2 series was replaced in fall 1963 by the new Opel Rekord A, 786,411 units had been built.