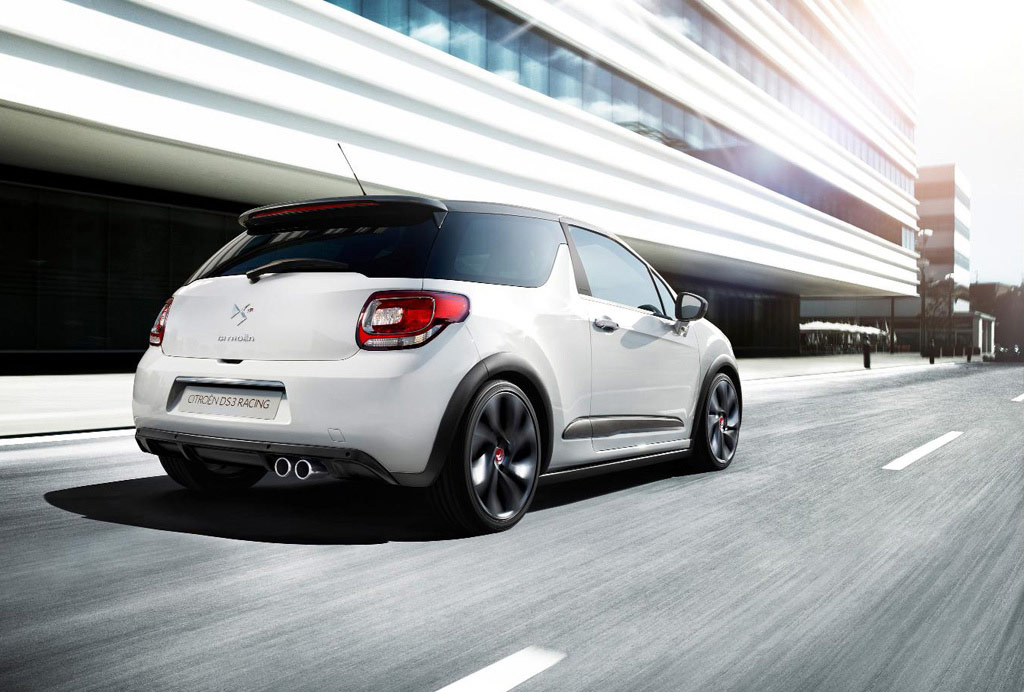 Citroën has released full details and pricing for the hotly anticipated DS3 Racing, and has announced that customer orders can be placed from 1st September, 2010.

Based on the top-of-the-range DS3 DSport THP 150, DS3 Racing has been extensively modified, by Citroën Racing, to deliver optimised sporting characteristics and specific equipment from the world of motorsport.

Significantly better specified than many of its competitors, DS3 Racing is a driver’s car that doesn’t compromise on comfort or convenient technology – standard equipment includes automatic digital air conditioning, Bluetooth® with USB connectivity and an eight-speaker HiFi system. DS3 Racing also has some new features such as S.ESP (Switchable Electronic Stability Programme) and the Citroën eTouch Assistance System.

RACING INSPIRED DESIGN
Respecting all of the fundamental design codes of DS3, DS3 Racing adds many more motorsport inspired features, including carbon fibre components such as the rear diffuser, front bumper, side rubbing strips and wheel arch extensions. The interior has received the same special treatment and the extensive use of carbon fibre continues on the centre console, steering wheel and door inserts.

DS3 Racing is available in two distinctive colour schemes, one with an Obsidian Black (pearlescent) body and a Sport Orange roof the other features a Polar White body with a Carbon Grey roof. The orange or grey roof colours are matched to the alloy wheels, door mirrors, chevrons, grille surround, tailgate spoiler and dashboard fascia.

The exclusive nature of DS3 Racing is clearly denoted by the addition of ‘Citroën Racing’ on the doors and figure-hugging sports seats, and the DS3 Racing signature on the rear tailgate.

POWER & DYNAMICS
Citroën’s new DS3 Racing has everything needed to become the benchmark in its segment in terms of dynamic performance. Thrills and excitement are at the heart of DS3 Racing and on the road this car’s sporting pedigree immediately becomes evident. DS3 Racing’s power and performance come directly from the brand’s expertise in rallying. Citroën Racing’s engineers have increased the power output of the 1.6-litre THP engine from 156hp to 207hp. Maximum torque is also increased, from 240Nm to 275Nm – an increase of nearly 15% – and is available over a wide rpm range to improve acceleration and engine flexibility.

DS3 Racing’s chassis and running gear have also been adapted and enhanced. The team’s engineers have been able to accentuate feedback from the road, with even more precision and control, sportier handling and swifter cornering. The suspension settings have been modified, specific dampers have been fitted, front and rear tracks have been widened by 30mm and the ride height has been lowered by 15 mm. The braking system has also been up-rated, with 4-piston callipers and special brake discs at the front. All of these changes combine to profoundly enhance the on-road behaviour of DS3 Racing.