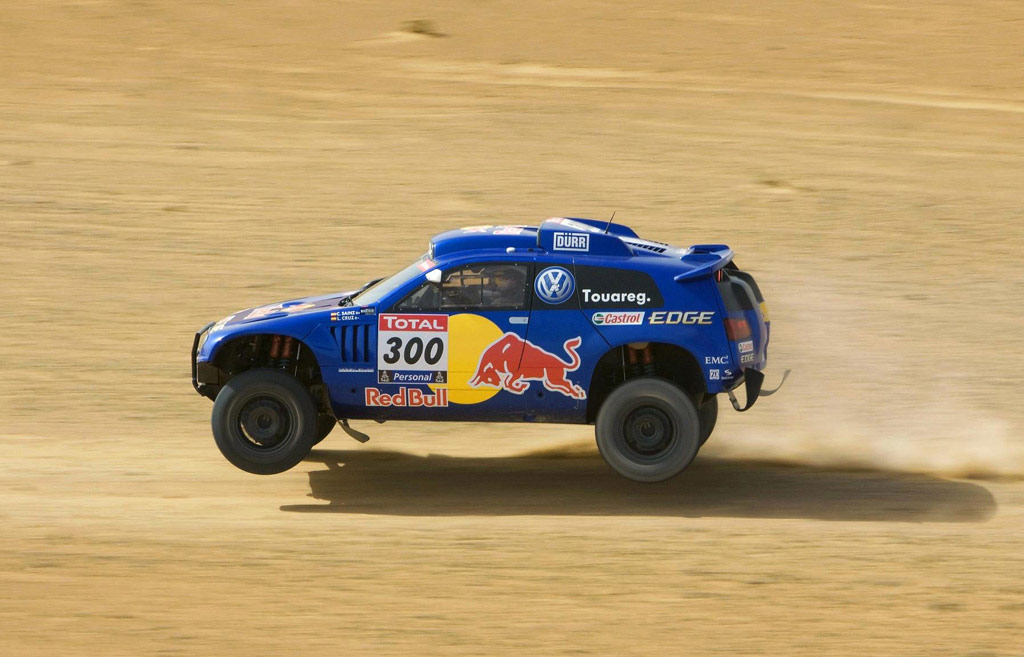 Volkswagen has unveiled its new Dakar challenger, the Race Touareg 3.

Replacing the Race Touareg 2, twice winner in 2009 and 2010 of the gruelling Dakar Rally and the first diesel-powered vehicle ever to win the event, the new Race Touareg 3 promises to be faster and more efficient while retaining the immense strength and durability of the outgoing car.

Wind tunnel testing has led to changes being made to the carbon fibre and Kevlar bodywork with particular attention to improving the cooling systems around the roof of the vehicle while minimising disruption to the airflow at high speeds. At the same time the changes have meant the Touareg has adopted a fresh look with new LED lights, a new grille, window line, rear clamshell and wheels.

Beneath the bodywork the twin-turbocharged 2.5-litre TDI engine has been optimised to allow greater economy while still producing 300 PS and 442 lbs ft of torque. It has also been revised to cope with the severe altitude changes incurred on the Dakar with the vehicle climbing to heights of over 15,000 feet above sea level. The Race Touareg 3 can now adapt to these conditions, meaning the performance doesn’t suffer despite the thinner air encountered at such altitudes.

The result is the ability to accelerate to 62 mph in 6.1 seconds before reaching a top speed of 117 mph in nearly any conditions.

In order to maintain these speeds in extreme off-road conditions the Race Touareg 3 needs to be able to withstand the rigours passing over sand dunes, through deep mud, and across gravel and broken tarmac roads. As a result the Race Touareg 3 is based on a high-strength steel spaceframe chassis with a pair of springs and damper units fitted to every corner in order to protect the vehicle against severe impacts. A set of specially developed BF Goodrich 235/85 R16 tyres provide the grip while a pair of wheels and tyres are carried by the vehicle at all times.

The new Race Touareg 3 has already undergone shakedown tests comprising 10,000 kilometres of simulated special stages ahead of the 2011 Dakar Rally. This equates to twice the length of the Rally itself and a greater distance than Formula 1 cars cover in an entire season.