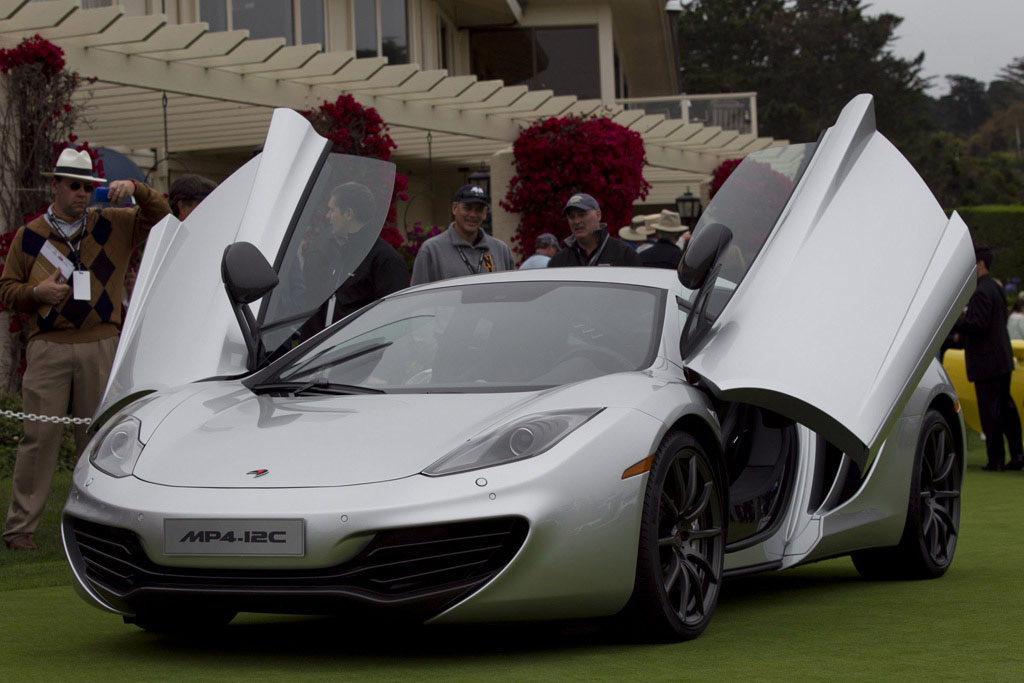 The official presentation of the 12C was made by McLaren Automotive’s Managing Director Antony Sheriff, opening the Gooding & Company auction of classic sports cars on Friday 13 August. Included in the auction was one of just 72 iconic McLaren F1 road-going production cars. Regarded by many as the greatest sports car ever built, this example, chassis number 62, was sold by Gooding & Company on Sunday 15 August for $3,250,000, one of the highest prices ever paid for an F1.

The same Supernova Silver 12C was then displayed on the famous Pebble Beach Concours d’Elegance Concept Car Lawn during Saturday and Sunday 14/15. Taking pride of place, and with the honour of being the first car on the lawn, its arrival drew crowds and gave North American car enthusiasts the first opportunity to see (and hear) the 12C in action.

A Titanium Silver 12C and the XP13 rolling chassis were also presented to over 1,000 guests, including Governor of California, Arnold Schwarzenegger and world-famous car collector, Jay Leno, over the course of the concours in McLaren Automotive’s hospitality tent at a genuinely unique location. McLaren Automotive enjoyed a high-profile position overlooking the famous 18th fairway at Pebble Beach.

“Launching the 12C at Pebble Beach and the Gooding & Company auction was a huge success. The feedback from visitors was simply phenomenal, and being able to make that direct link to our unique road car heritage with the presence of a McLaren F1 at the event was very special. The Pebble Beach Concours d’Elegance has a unique place in American car enthusiasts’ hearts, and I believe McLaren made a few beat just a little faster this year. We will now take the 12C on tour around North America to every city in which we plan to sell the car, and from the feedback at Pebble Beach we are expecting to see a few familiar faces coming back for a second look!”

During the Pebble Beach event, McLaren Automotive confirmed that The Collection will represent McLaren in Miami and welcomed its newest North American dealer candidate, Pfaff Automotive Partners in Toronto. These two highly regarded premium car retailers will form part of an initial North American retailer network of ten. Two locations, Newport Beach in Orange County, California, and Philadelphia remain open but will be appointed in the coming weeks.

“Pebble Beach Concours d’Elegance was the perfect location for American sports car owners and car enthusiasts to see the MP4-12C for the first time. The interest in the 12C and the understanding of our brand was incredible, and McLaren Automotive will now tour North America so that even more prospective customers and McLaren fans can see the car in the metal. It’s clear from the feedback at Pebble Beach that high-performance sports car owners in North America are really looking forward to the 12C and the new way that McLaren Automotive plans to do business. It’s a pleasure to welcome Pfaff Automotive Partners in Toronto and The Collection in Miami to the McLaren family. We look forward to delivering a great range of McLaren sports cars to them over the coming years, and expect them to help us make a great name for McLaren in North America by delivering an ownership experience every bit as good and revolutionary as the 12C itself.”

McLaren Automotive now moves on to Los Angeles and presents the 12C to prospective customers at its McLaren Beverly Hills location on Thursday and Friday 19/20 August 2010.