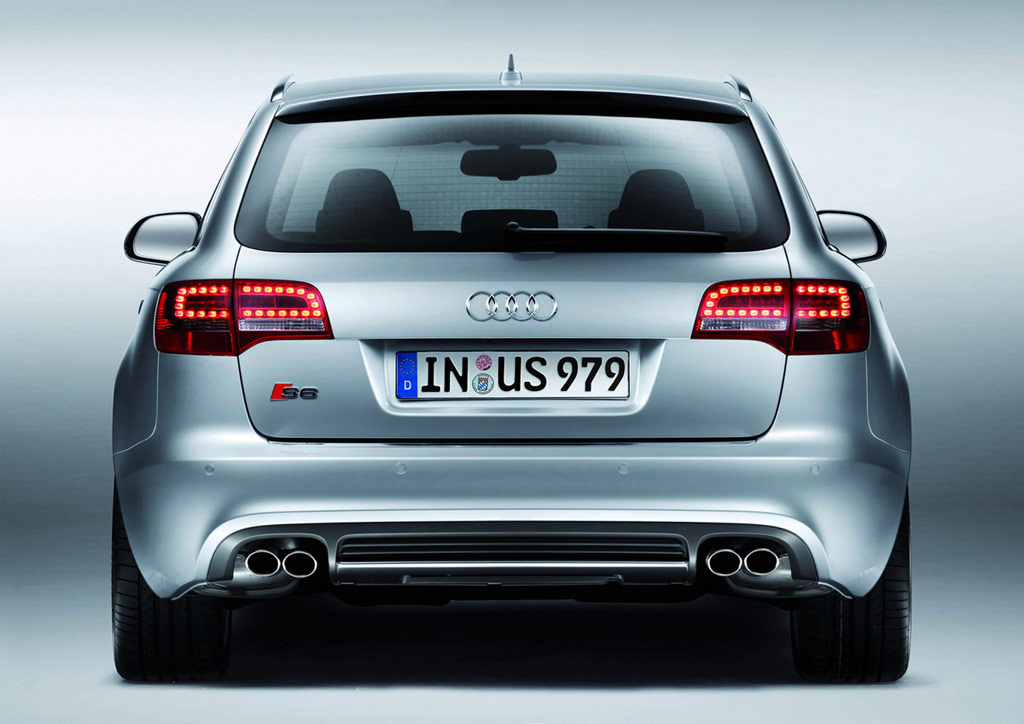 Superior power deployment, combined with the highest level of comfort and an elegantly understated appearance: the Audi S6 is the sports model of the A6 series. Available in sedan and Avant versions, it is a combination of athleticism and luxury at the highest level. Its 5.2-liter V10 with FS injection produces 320 kW (435 hp), putting the S6 in a leading position in its field of competitors.

Design and Interior
The Audi S6 and the S6 Avant come with a series of new visual features – modified, distinctive front and rear bumpers as well as new 19-inch wheels in the S design. Also new are the Ice Silver, Condor Gray and Stone Gray paint finishes, along with eight other colors.

The Audi S6 offers superior athleticism on the road, yet is free from any hint of aggression. The most noticeable changes compared to the A6 are on the front end of the car. The single-frame grille displays the S6 emblem and features double vertical aluminum-look struts. A spoiler lip ensures additional downforce. Daytime running lights are located on the front bumpers, each consisting of five white LEDs. Xenon plus headlights are also standard features, the ‘adaptive light’ dynamic cornering light technology is optional. LEDs are also in the taillights.

Differences can also be seen in the door sill trim with S6 logos, the rear spoiler in the trunk lid or on the roof, aluminum-look exterior mirrors, the V10 emblem under the side turn signal and an S6 logo on the rear. The vehicle’s tail end also displays a color-contrasting diffuser in the bumper and the four oval-shaped tailpipes of the exhaust system.

Even the interior of the Audi A6 reflects the character of dynamic elegance and high quality – from the organic flow of the cockpit to the superior operating concept of the MMI.

In the spacious and comfortable interior, Audi is offering two new colors. Among the new features are also the flexmetallic silver material for the center console (aluminum if requested) and comfortable, leather-upholstered armrests.

The front sport seats with integrated head restraints are upholstered with Alcantara leather and can be electrically adjusted in many positions. The three-spoke multi-function sports steering wheel with the S logo has a double seam in a contrasting color; the shift paddles radiate with an aluminum look. The trim inserts are in carbon. Anthracite is the dominant color on the instrument panel; the center console is black.

Thanks among other things to its compact design, the 10-cylinder concept is ideal for achieving a sporty performance. The FSI technology, which burns the mixture homogeneously, permits a high compression ratio – an example from Audi’s broad experience in motor sport. In the S6, the driver experiences the concentrated hi-tech as meaty torque, spontaneous response, distinctive free-revving character and a melodious, core sound.

The transmission is a six-speed tiptronic. Its ratio is comparatively short, allowing rapid, optimal gear changes. Like all Audi S models, the S6 also applies its superior power to the road with quattro permanent all-wheel drive. A center differential normally distributes 40 percent of the power to the front and 60 percent to the rear wheels. This slight emphasis on the rear end ensures particularly dynamic handling.

Running gear
The Audi S6 suspension has firm settings – as one would expect from a sports car – but at the same time guarantees excellent ride comfort over long distances. Its essential components are manufactured in lightweight aluminum, which decisively reduces the unsprung masses. The servotronic steering has been configured for a more direct response than on the basic A6 model. The Audi S6 is factory-fitted with 265/35 R19 wide tires. An 18-inch braking system ensures reliable deceleration, and its four disks are ventilated and generously dimensioned.

Equipment and trim
The Audi S6 is equipped with the powerful and therefore easily operable Multi Media Interface (MMI) including high-resolution 6.5-inch color display on board. It includes a double tuner, a DSP sound system with 10 speakers, two SD card readers and a CD changer.

The optional telephone system combines all benefits of the permanently installed telephone with those of a cell phone. The driver’s cell phone, which can stay in his or her pocket during driving, works with the internal vehicle GSM module via the Bluetooth interface. The Bluetooth car phone is also operated via the MMI system. The deluxe automatic air conditioning plus is also a standard feature of the Audi S6.

The equipment, specifications, and prices stated herein refer to the model range offered for sale in Germany. Subject to change without notice; errors and omissions excepted.