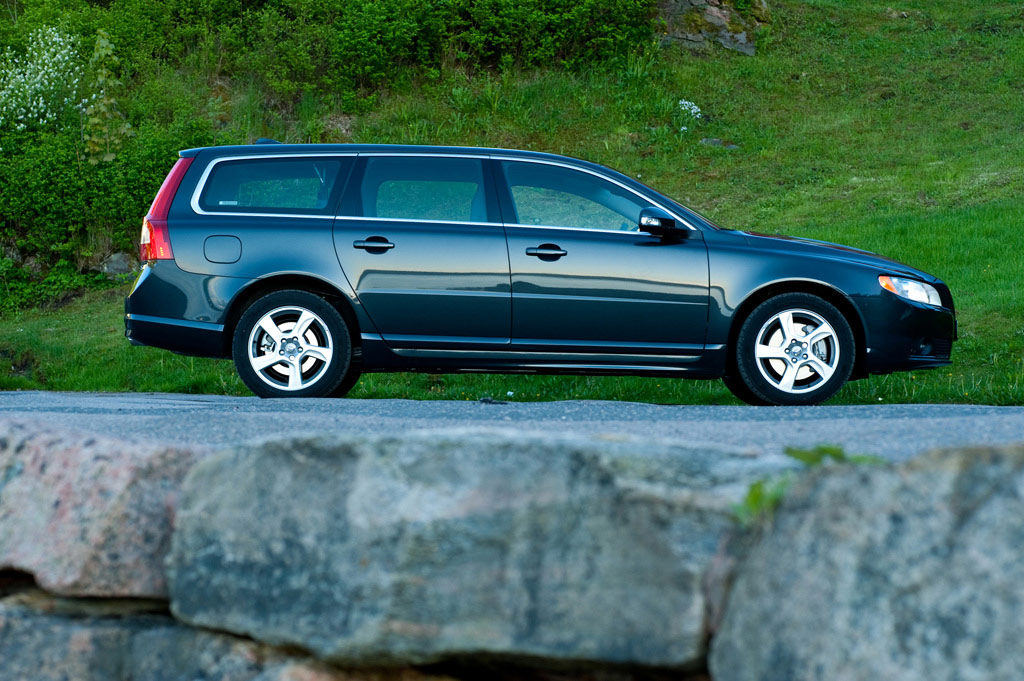 Backed by more than 50 years of ongoing refinement and improvement, Volvo Cars is still the global leader in the segment for large estate cars. The Volvo V70 boasts an innovative combination of luxury and versatility and inherits its genes from classics such as the Volvo Duett, Volvo 245 and Volvo 745. With greater focus on design and comfort, the V70 is both luxurious and practical, not just for families with growing children but also for all active people with high demands on their cars.

Sporty impression
The front of the V70 incorporates a soft nose with a black egg-crate grille featuring chrome in the vertical bars. This gives the luxury estate car a different, sportier face. The climbing waistline of the side also contributes to the forward-leaning, dynamic stance, which is further reinforced with the help of the black pillars between the side windows. This together with the chrome moulding around the entire window creates an aura that is luxurious yet sporty at the same time. The Volvo V70 has colour-coded lower body panels as standard, in line with the Volvo S80.

Dynamic tailgate
From the side the tailgate’s upper section has a sporty, slightly forward-leaning stance. Nonetheless, Volvo has not compromised one single bit on functionality. The overlapping tailgate takes the upper part of the tail lamps with it as it rises to make the opening even more generous. In this way, the space behind the tailgate is large and easy to load.

Available with R-design
The V70 R-Design includes a number of design details and solutions that enhance the model’s sporty and personal impression. Among these could be metioned silk metal grille and foglights, sports chassis, sports tailpipe, R-design upholstry, sports seats and so on.

Scandinavian design at its best
The interior of the V70 is an example of Scandinavian design at its best. Every little detail has been designed with one hundred percent focus on both clean form and intelligent functionality. Comfort in the front seat includes superb seats and ergonomically designed instruments – including an elegant, super-slim centre stack and an audio system of absolute world class.

The integrated dual child booster cushions can be adjusted in two steps and the 40/20/40-split rear seat has integrated seat belts. The lightweight design of the rear backrest and the simple folding mechanism are other examples of improved functionality for passengers. Electrically folding rear seat headrests are also available in the V70.

Load space under the floor
Everything and everyone rides first class in the Volvo V70. Even the luggage compartment and all its options and accessories have been designed to meet the very highest demands on luxury and intelligent functionality.
Among the smart details in the luggage compartment is a storage space under the floor that is locked when the tailgate is shut. A power tailgate is an option.

Controlled ride
The car has been developed and balanced to give a first-class driving experience, based largely on pliant ride and secure roadholding allied to high stability. Stability is particularly important when driving with many passengers and a lot of luggage.

Thanks to the design of the body structure and the optimised use of different grades of high-strength steel, torsional rigidity was increased by no less than 15 percent compared with the previous V70 model.
The chassis technology has been further developed to provide even more stable and more controlled road manners. A lot of effort has also gone into features such as the suspension system and engine installation to ensure high-class comfort.

DSTC is standard
DSTC (Dynamic Stability and Traction Control) is standard. This is a stability-enhancing system that when necessary reduces engine torque and applies carefully calculated braking power to reduce the risk of a skid.

Active chassis with Four-C – and three choices
The car can be optionally specified with an active chassis based on Volvo’s Four-C technology. It is an advanced self-regulating chassis system that uses a number of sensors to continuously monitor the car’s behaviour. The dampers are adjusted to suit the current driving conditions in mere fractions of a second.

All-Wheel Drive with Instant Traction
The T6 model of the all-new Volvo V70 is equipped with Volvo’s All-Wheel Drive. Using an electronically controlled hydraulic clutch, the AWD system distributes drive between the front and rear wheels to ensure the best possible road grip in all situations. The system features Instant Traction, which shifts drive at lightning speed from the front to the rear wheels when starting on a slippery or loose surface.

Sharper T6
Volvo V70 now comes with upgraded petrol engines. The six-cylinder, turbocharged T6 has a displacement of 3.0 litres and it now offers even sharper performance, thanks mainly to a reduction in internal friction. As in the all-new S60, it now offers 304 hp and no less than 440 Nm of torque. Maximum torque is achieved between 2100 and 4200 revs. This results in rapid acceleration and smooth driving properties. All-Wheel Drive is fitted as standard.

New direct-injected engines
The new four-cylinder 2.0 GTDi (Gasoline Turbocharged Direct Injection) engine has a displacement of two litres and produces a generous 203 hp, with 300 Nm of torque available from 1750 rpm. There will also be a five-cylinder petrol engine as an alternative. It is fitted with a light-pressure turbocharger and produces 231 hp.

D5 with 205 hp
The Volvo V70 can also be specified with the high-performance D5 engine that produces 205 horsepower and 420 Nm of torque.

New 2-litre turbodiesel D3
The new five-cylinder 2-litre turbodiesel introduced in the all-new Volvo S60 is now available throughout Volvo Cars’ model range. The new five-cylinder D3 is in principle the same engine as the well-established 2.4-litre diesel, but its displacement has been reduced with a shorter stroke to optimise fuel consumption.
The injection system has a different type of piezoelectric fuel injector compared with the D5 engine. These injectors minimise consumption with exceptionally rapid and precise injection pulses under high pressure. This promotes extremely efficient combustion.

In order to give the car better driving properties, the turbocharger has been fine-tuned to provide high torque from low revs. In the Volvo V70 the newly developed 2-litre diesel engine produces 163 hp and 400 Nm of torque.

Crumple zones made using different grades of steel
The patented front body structure is divided into zones, each of which has a different task during the deformation sequence. The outer zones are responsible for most of the deformation. The closer the collision forces get to the passenger compartment, the less the material deforms.

Two-step booster cushion
The booster cushion, which is integrated in the rear seat, can be set at two heights, allowing children of different sizes to sit sufficiently high to see out through the windows yet at the same time get the most effective protection possible. The lower setting is intended for children between 115 and 140 cm in height and weighing between 22 and 36 kg, while the upper setting is designed for children measuring 95-120 cm and weighing between 15 and 25 kg. The Volvo V70 can be equipped with integrated child booster cushions in both outer rear seats.

Second-generation WHIPS system
Volvo’s system for avoiding neck injuries – WHIPS (Whiplash Protection System) – is one of the most effective on the market. In the event of a rear-end collision the front seat backrest accompanies the passenger’s initial body movement and dampens the incoming force rather like one’s hand does when catching a ball. The V70 features a further-developed generation of WHIPS to ensure that the damping motion is gentle and to provide good contact between the head and head restraint throughout the impact sequence.

Collision warning with Auto Brake
Rear impacts represent a third of all reported accidents – and in more than 50 percent of these accidents, the driver does not brake at all. Collision Warning with Auto Brake is a refined warning system that initially warns the driver and pre-charges the brakes. The brakes are automatically activated if the driver does not act when a rear-end collision with a moving or stationary vehicle is imminent.

BLIS and IDIS for better control
The Volvo V70 is also equipped with BLIS (Blind Spot Information System) and IDIS (Intelligent Driver Information System), two innovations that help the driver maintain better control over the traffic situation. BLIS registers if another vehicle is in the offset rear blind spot alongside the car and alerts the driver via a visual signal. IDIS helps stop the driver being distracted by non-essential information in pressing situations, for instance by delaying incoming phone calls or text messages.

Adaptive cruise control
Adaptive Cruise Control (ACC) continually monitors the gap to the vehicles in front and automatically adjusts the car’s speed to ensure that this gap does not shrink too much.

Dual Xenon and Active Bending Lights (ABL)- swivelling headlamp beams
In order to contribute to the best possible visibility during night-time driving on curving and twisting roads, the car can be equipped with Active Bending Lights – swivelling headlamps that follow the sweeps and bends of the road. By using the Dual Xenon light technology it give a 90 per cent boost to the driver’s vision round bends at night. The Dual Xenon gas discharge lamps expand the vision range at nights by about 230 per cent. This means the driver can gain a further 45 metres for braking.

The Volvo On Call is Volvo Cars’ roadside assistance and emergency service and can now be combined with the Bluetooth mobile phone service. With Volvo On Call it is now even possible to activate the cabin heater remotely via SMS text messaging.