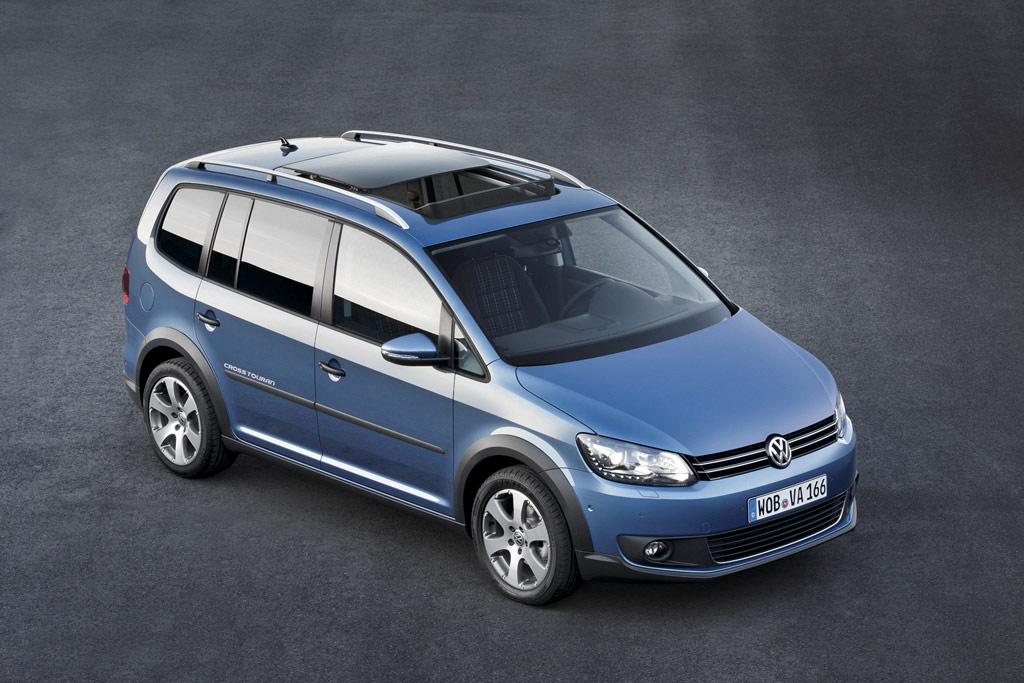 It’s the positive lifestyle statement of the summer: the new CrossTouran! Following the CrossPolo and CrossGolf launched earlier in the year, the CrossTouran now fills the gap in the Cross lifestyle family. Volkswagen’s ‘more extrovert’ compact MPV is now available to order from a starting price of €27,700.

The Touran already follows the new Volkswagen design DNA and impresses externally with a dynamic character line, a new, powerful rear-end design and two-part taillight clusters. However, the CrossTouran traditionally ‘goes one better’ and with its modified bad road kit complete with longer suspension springs it gets 20 millimetres more ground clearance than the standard model. On top of that comes the mix of 215 tyres at the front and 235s at the back, both on 17-inch alloy wheels. Thanks to its striking exterior elements the new CrossTouran is also instantly perceived as an autonomous model. The widened wheel arches form a unit with the side sills, which are drawn right up into the doors. It is also given a sporty character by the differentiated front and rear bumpers and the black grained protective strips on the doors.

In addition to a specific design the autonomous ‘Cross’ brand also stands – like ‘GTI’ and ‘R’ – for a specially designed set of features. As well as the alloy wheels, bodywork kit and bad road suspension, the new CrossTouran boasts added features aplenty: a roof rack in matt aluminium, decorative trim in stainless steel look, electric windows front and rear, extra comfortable seats in the front with height adjustment and lumbar support, leather steering wheel plus leather trim on gearlever knob and handbrake and a special seat cover pattern.

Through the sum of its special features the CrossTouran glistens with Wolfsburg virtues: interior comfort and convenience (40 storage bins and optional third seating row), driving fun and environmental awareness. For instance, as well as with the familiar TSI and TDI engines the new CrossTouran is now also available with the particularly efficient and environmentally friendly ‘EcoFuel’ natural gas engine. Fuel consumption when driving on natural gas is 4.8 kilograms per 100 kilometres, which equates to CO2 emissions per kilometre of 133 grams. The additional natural gas tanks are located beneath the floor, so that the vehicle’s cargo capacity of up to 1,989 litres is not affected.

In total CrossTouran customers have a wide array of TSI, TDI and natural gas engines to choose from, ranging in power from 77 kW to 125 kW (105 to 170 PS). This lifestyle-oriented all-rounder – complete with all visual and technical refinements – can now be ordered in Germany from a starting price of €27,700.