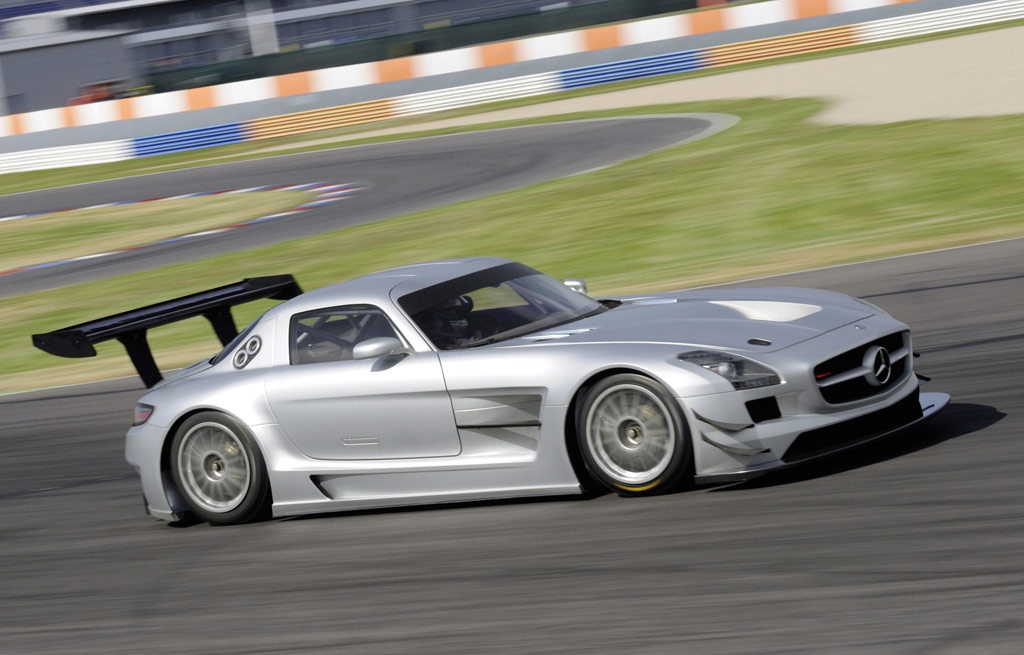 Interested teams can now order the new Mercedes-Benz SLS AMG GT3. The gullwing model for the racetrack is being delivered on time for the coming motorsport season, starting in February 2011. The sales price is €334,000(net) / €397,460 (incl. 19% VAT). Developed in accordance with the GT3 regulations of the FIA (Fédération Internationale de l’Automobile), the SLS AMG GT3 is designed as a customer sports car for sprint and endurance races. These races for GT cars which are similar to their roadgoing counter-parts have diversified starting fields and are always filled with excitement. They are becoming increasingly important on the world stage, not least thanks to their relatively inexpensive cost structure. The development and testing programme for the SLS AMG GT3 is proceeding as planned. Bernd Schneider, who has been a Mercedes-Benz works driver for many years and has won more DTM championship titles than any other driver, is at the wheel for the bulk of the test drives, which started in June. The first competitive action for the car, as part of the testing programme, will be in the VLN race at the legendary Nürburgring Nordschleife (North Loop) at the end of September.

“The Mercedes SLS AMG GT3 marks the beginning of a new era in Mercedes-Benz customer motorsport. This is an exciting and spectacular sports car for dedicated private teams and talented private drivers. AMG will work together with our tried-and-trusted sports and touring car partner HWA to put in place a motorsport customer department which will guarantee its motorsport customers hallmark Mercedes service.”

“I am very pleased that the demand for this new and unique competition car is so great – there are many more enquiries for orders than can initially be dealt with. But, have no fear, the production curve will be ramped up step by step so that all interested parties who are serious about the SLS AMG GT3 can be served successively.”

The new SLS AMG GT3 is an emphatic continuation of AMG’s commitment to motorsport. AMG has been a pioneer in the motorsport world ever since its foundation in 1967. Ola Källenius, Chief Executive Officer of Mercedes-AMG GmbH:

“With the SLS AMG GT3, AMG is once again showing its vast experience gained in over 40 years of motorsport and its high expertise when it comes to developing unique, high-performance vehicles.”

The new racing version of the SLS AMG is developed and produced by AMG in close cooperation with HWA AG. HWA is responsible for the development and deployment of the AMG-Mercedes DTM racing team on behalf of and in constant consultation with Mercedes-Benz Motorsport. The HWA team is one of the most successful in international motorsport, as proved by nine driver championships in the DTM and ITC, as well as two championship titles in the FIA GT series.No other brand has won nearly as many DTM races and DTM-titles as AMG‑Mercedes.

Interested racing teams can use the new SLS AMG GT3 in all race series in accordance with the FIA GT3 regulations, for example the FIA GT3 European Championship, the ADAC GT-Masters and the endurance championship organised by the VLN (Association of Nürburgring Endurance Cup Organisers, with 10 motorsport clubs) as well as the 24-hour races at the Nürburgring or Spa‑Francorchamps (Belgium).

Spectacular racing-car looks
The GT3 variant marks a further enhancement of the puristic design of the SLS AMG with its long bonnet, a flat greenhouse positioned a long way back and a short rear end. Body modifications make the gullwing model even more spectacular. Here the focus was on aerodynamic performance – as is seen not only in the new front apron with a splitter, the bonnet with its central cooling air vent and the wider front and rear wings, but also in the side wheel arch air vents, the sideskirts with cooling ducts for the rear brakes, the smooth underbody with a rear diffuser and the adjustable rear aerofoil. All these features ensure a low drag coefficient and excellent aerodynamic efficiency – while guaranteeing effective cooling of the thermally highly stressed components. The C-pillars accommodate the standardised filler pipes for the fast-refuel system.

The FIA will determine the maximum output of the AMG 6.3-litre V8 front-mid engine with dry sump lubrication on the “Balance of Performance” principle. This is intended to ensure that all the racing cars taking part have an equal chance. The classification process, during which the kerb weight is also determined, will be completed in spring 2011. Power transmission in the GT3 variant is by a sequential six-speed racing transmission with steering wheel shift paddles, an integrated multi-disc locking differential and traction control. As in the standard SLS AMG, the transmission is located at the rear axle: the engine and transmission are connected by a torque tube within which a carbon-fibre shaft rotates at the engine speed, as in the roadgoing version. The transaxle design ensures favourable weight distribution as well as optimising handling and traction.

In a system that is largely the same as the one used in the roadgoing cars, the wheels are located by a double-wishbone suspension of forged aluminium at the front and rear. Adjustment facilities for the springs and shock absorbers, the suspension height, the stabilisers, the track width and camber allow an individual setup for the racetrack. Rack-and-pinion steering with a more direct ratio and servo assistance make for extremely agile handling. Behind the central-locking AMG 18-inch light-alloy wheels, a steel racing braking system with racing ABS ensures outstanding deceleration. The airjack system integrated in the underbody allows fast wheel changes.

Functional racing car atmosphere, exemplary safety level
A functional racing car atmosphere dominates the interior of the SLS AMG GT3: like the standard-production gullwing model, the racing version features a dashboard in the shape of a powerful wing section to give the impression of width. The steel roll cage offers a high level of safety for the driver as well as further stiffening the aluminium spaceframe.

In a set-up similar to that of the Mercedes-Benz DTM vehicles, the seat shell is located in a high-strength carbon-fibre (CFRP) safety cell. Thanks to its special form, the safety cell, which is bolted to the roll cage and the aluminium spaceframe, offers far greater protection for the driver’s shoulders, hips and legs. The seat shell is individually foam-padded, features the HANS (Head and Neck Support) system, and is equipped with a six-point seat belt, thus maximising occupant safety. In conjunction with the 120-litre CFRP safety tank with inner bladder positioned on the rear axle and the optimised fire extinguisher system, the SLS AMG GT3 provides an exemplary level of safety that is unmatched by any other current GT3 car.

The central display is ideally positioned within the driver’s field of vision and provides all the relevant information such as track speed, engine rpm, operating temperatures, lap times and gear selection. The racing steering wheel with shift paddles for gear changes allows perfect control of the vehicle. Additional controls are located on the centre console. Here the driver can start the AMG V8 engine and adjust the traction control as well as engage reverse gear or – if the worst comes to the worst – activate the integrated fire extinguisher system. Brake balance adjustment is also possible.

Testing programme with Bernd Schneider started in June 2010
Development of the new Mercedes-Benz SLS AMG GT3 is proceeding on schedule; the testing programme began on the Lausitz Eurospeedway in June 2010. Bernd Schneider (46) – who has been a Mercedes-Benz works driver for many years and is also an AMG brand ambassador – and Thomas Jäger (33) were brought on board as test drivers. With five DTM titles, one ITC championship and one FIA GT championship to his name, Bernd Schneider is one of the most successful German racing drivers. Thomas Jäger is the reigning Porsche Carrera Cup (Germany) champion, and drove in DTM for Mercedes-Benz between 2000 and 2003. This season he is lining up in the ADAC GT-Masters (Germany).

For Bernd Schneider, who will be doing the bulk of the test driving, developing a basic setup is a top priority.

“The SLS AMG has excellent genes for being successful in motor racing. Even on my first fast laps at the Lausitz Eurospeedway, it was obvious that the GT3 version of the gullwing model has just what it takes to be a big hit on the racetrack. The combination of optimum weight distribution, a low centre of gravity, a powerful AMG V8 engine and efficient aerodynamics already indicates that the SLS AMG GT3 will be very competitive.”

First competitive action in the VLN race on the Nürburgring Nordschleife
As well as being tried out at the Lausitz Eurospeedway and the Sachsenring circuit, the SLS AMG GT3 is also being tested on the Nürburgring Nordschleife – under realistic racing conditions. On top of the pure testing and tuning drives, the gullwing model will taking part in its first races in the VLN endurance championship later this year.

The extensive development and testing program focuses on various suspension settings, engine mappings, tyre mixes and aerodynamics configurations. In addition to this, the complete package has to prove its durability and serviceability. At the same time, the AMG 6.3-litre V8 engine and the six-speed racing transmission with sequential gearshift are being run on the test stations at HWA AG. Plus the entire vehicle is being tested on a driving-dynamics test station.