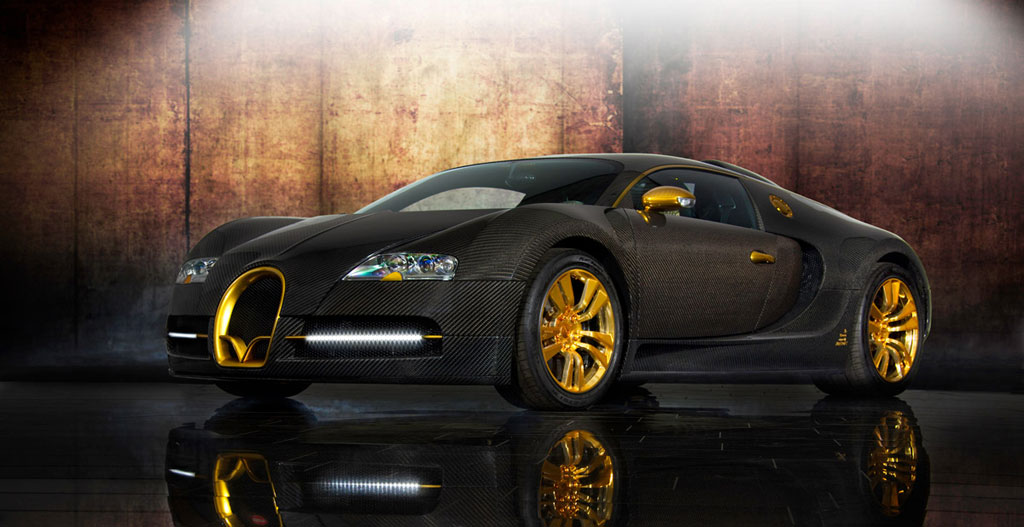 Compared with the standard Veyron, the LINEA Vincero has received a comprehensive facelift to its front, consisting of modified fenders, a shortened bonnet and a striking front apron.

The LED daytime running lights and the stylised letter “V” (paying homage to the name Vincero) built into the car’s front end are particular highlights of the new design while the newly developed side skirts form a visual and aerodynamic link between the axles. Larger air outlets at the rear and at the sides of the car ensure optimal engine cooling and, with the new diffuser, underscore the vehicle’s vibrant design. MANSORY manufactures almost all the components in the car’s body from ultra-light, high-strength carbon and the autoclave method of hardening under high pressure and high temperatures used during the manufacturing process makes a huge improvement to the quality of the materials. One unique feature of the design of the LINEA Vincero d’Oro is the carbon fabric with inbuilt copper thread used by MANSORY, the metallic sheen of which really brings out the exceptional nature of this special car.

Other gold-coloured features complete the LINEA Vincero d’Oro, including the distinctive “turbine” design alloy wheels, the curved grill featuring the stylised “Vincero-V”, the door handles, the rear view mirror caps and the fuel tank cap. But that’s not all: the headlight washer nozzle covers, the borders around the daytime running LEDs and the decorative features on the roof all shimmer in precious gold too.

The car’s interior has an exclusive look and feel while remaining functional. MANSORY understands the importance of combining luxury and technology with the golden aspirations of this unique car. Traditional workmanship, fine materials and a stylistically confident design combine to create an interior that is fitting for such a classy car. You notice this in particular with the LEDs of the car’s mood lighting system placed in the car’s seats, the door trims and the dashboard. The entire passenger cabin shines in the golden glow of this feel-good lighting which masterfully draws attention to the high-quality carbon appliqués as well as to the specially embossed leather. The airbag steering wheel with inbuilt shift paddles and gilded elements, designed in a new ergonomic style, is both sporty easy to keep a good grip of. Gold alloys can also be found on the decorative strips of the door trims and on the centre console.

The Mansory Cooperation GmbH solely offers proprietary developed modification accessories under the name LINEA Vincero. They do not market entire automobiles and also do not sell any such vehicles.