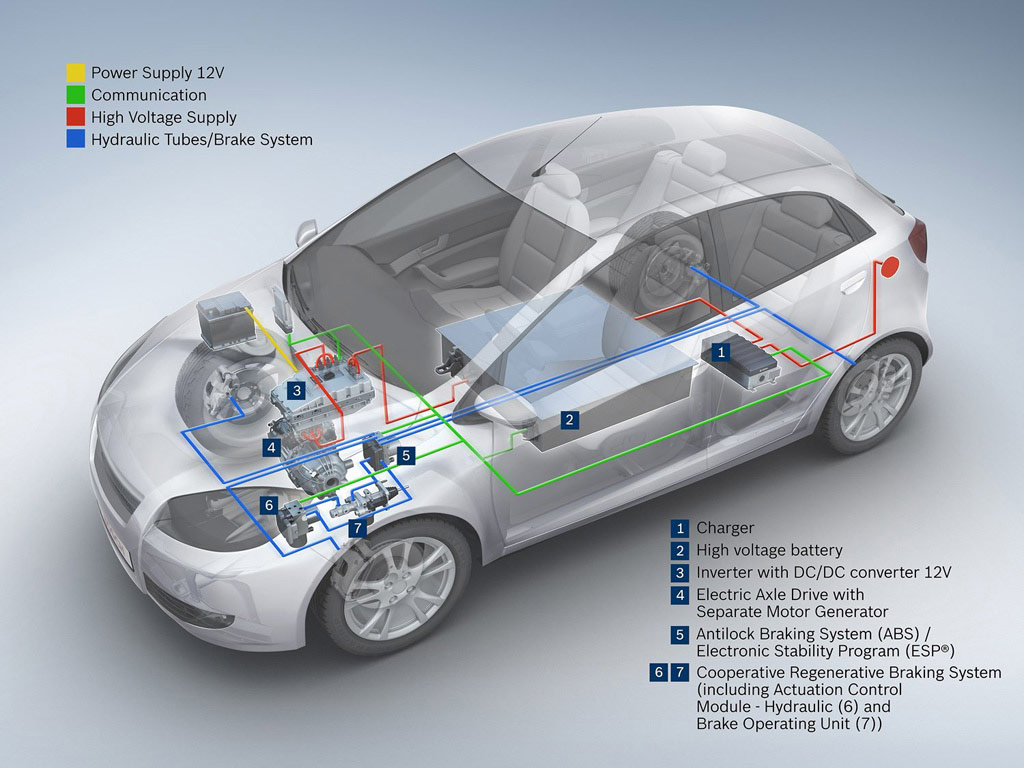 Following the successful launch of Bosch’s parallel full-hybrid technology, the company is also increasingly investing in the development of powertrain technologies for all-electric vehicles.

“In the future, the choice of powertrain will depend on the individual driver’s mobility requirements. The electric car will play an increasingly prominent role here,” says Dr. Rolf Bulander, president of the Gasoline Systems division of Robert Bosch GmbH.

The potential of electric vehicles can be exploited above all in large cities, which are growing rapidly worldwide. The can also make the air in urban areas cleaner. If they are powered by electricity from renewable sources, electric cars can also play a significant role in reducing CO2 emissions. For driving over medium to long distances, economical diesel and gasoline engines, which are being continuously improved, come into their own. Hybrid vehicles are an option for short-, medium-, and long distance driving, while fuel-cell vehicles are especially suitable for long distances.

“This is why we are not limiting our efforts to just one powertrain – we are working to develop diesel and gasoline engines further, while at the same time making a concerted effort to electrify the powertrain,” Bulander says.

Hybrid drives, which combine a combustion engine and an electric motor, are an interim technology en route to the all-electric drive train. This year has seen the launch of full-hybrid versions of the Porsche Cayenne S and Volkswagen Touareg, the first vehicles worldwide to feature Bosch’s innovative parallel-hybrid technology. In addition, PSA Peugeot Citroen and Bosch have formed an engineering alliance to develop diesel hybrids with electric four-wheel drive, which will go into series production in 2011. For these vehicles, Bosch is developing and manufacturing the power electronics and electric motors. In the Hybrid and Electric Vehicle business unit, which Bosch established in 2009, further projects are in the pipeline. In 2004, what was then known as the ‘hybrid technology project unit’ began its operation with roughly 100 associates. Today, some 800 Bosch associates worldwide develop technologies for hybrid and electric vehicles. In addition, there are the roughly 650 associates in the SB LiMotive joint venture, who are further developing lithium-ion battery technology for use in the automobile. BMW is the first customer of the joint venture, which was set up in 2008. This German automaker will purchase the battery cells for the purely electrically driven Megacity Vehicle from SB LiMotive.

Bosch has already established a complete product portfolio for hybrid and electric powertrains. It includes core components such as the power electronics which control the energy flows in hybrid and electric vehicles, as well as high-torque electric motors. Work is underway to prepare series production of power electronics components in Reutlingen and of electric motors in Hildesheim. Then there are the chargers which will allow plug-in hybrids and electric vehicles to recharge from the power socket.

“Going forward, the objective now is to reduce the weight and installation space of these components and increase their efficiency, so as to achieve as great a range as possible on the basis of the battery capacity available,” says Dr. Matthias Küsell, who is responsible for engineering and customer projects for electric vehicle and hybrid systems at Bosch.

With all these products, plus the lithium-ion batteries that are developed in the SB LiMotive joint venture set up with Samsung, Bosch is now in a position to supply the entire electric powertrain – from the energy storage medium to the electric motor. Every year, Bosch makes some 400 million Euros available for development work on powertrain electrification.

Using hybrid and electrical powertrains has an impact on many other automotive components and systems. Bosch is also investing in these areas. They include efficient auxiliary units, such as electric power steering. Then there are braking and ESP® systems tailored to hybrid and electric vehicles. They coordinate interaction between the conventional friction brake and the braking effect of the generator. Finally, there are features such as efficient thermal management for the heating and cooling systems in the electric vehicle, or navigation systems that compute the optimum route in terms of fuel efficiency.

To explore and create the environment needed for electromobility, Bosch is working together with other companies in three government-funded projects that cover the major areas of electromobility development: ‘eperformance’ deals with the electric vehicles themselves, ‘MeRegio-Mobil’ deals with the integration of the electric vehicle into a future (battery charging) infrastructure, and ‘BeMobility’ deals with testing new mobility services. Within these projects, Bosch expertise contributes a great deal toward exploring, evaluating, and further developing technology, infrastructure, and mobility concepts. In the end, this will pave the way for a gradual roll-out of electric vehicles. Out of 100 million newly produced vehicles in 2020, Bosch expects to see some three million electric cars and plug-in hybrids, as well as six million hybrid vehicles. However, this figure may vary depending on future legal requirements, rising fuel prices, and progress in battery technology. In the long run, the future will belong to the electric vehicle. But these figures clearly illustrate that the combustion engine will remain the dominant powertrain for the next 20 years.