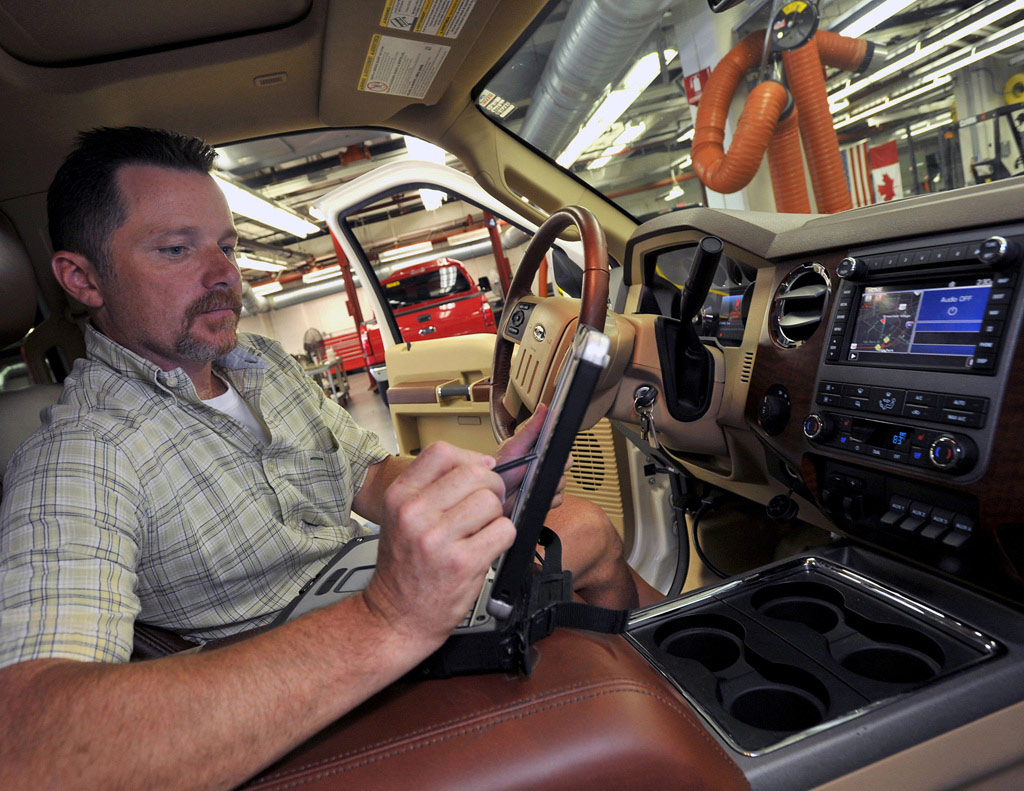 Ford Motor Company will begin production this week of the most powerful diesel engine ever installed in a heavy-duty pickup, Barb Samardzich, vice president of powertrain engineering, announced today at an international auto industry conference.

“These numbers are impressive, yes, but that is not why they matter,” Samardzich said. “These numbers matter because our customers say they do. The higher torque means that fleet operators, such as Florida Power & Light, can plow through deep swamps and get to downed power lines faster and more confidently. It means that oil and gas crews in the Northwest can tow up an 8,000-foot grade maintaining a steady speed and using less fuel.”

In an industry-first customer loyalty program, Ford will provide the power upgrades free of charge to all current owners of a 2011 Super Duty diesel pickup. Customers will receive letters explaining the procedure, a 30-minute software adjustment to the truck’s powertrain control module, and inviting them to visit their dealerships for the upgrade.

The upgrade program will begin by Aug. 31 and continue for the next 12 months. The 2011 Super Duty diesel pickups in dealer inventory will receive the upgrade as well.

“We know that durability and reliability is uppermost in the minds of our Super Duty customers, along with torque and horsepower, so we took a conservative approach that ensured that the new Power Stroke would be absolutely bulletproof while delivering significantly improved power,” said Chris Brewer, chief engineer of the 2011 Super Duty.

New Ford design and engineering methods enable strong platform from which to build
The new Power Stroke is a “clean sheet” that combines the best of proven technology with new, patented approaches backed by an extensive laboratory and real-world testing regimen to assure customer satisfaction. Benefits of the new 6.7-liter Power Stroke V8 turbocharged diesel engine include:

The new Super Duty debuted not only with a new diesel engine, but with a new heavy-duty TorqShift™ six-speed automatic transmission. As experience was gained building the new powertrain, engineers continued to test components, check data and seek optimizations.

More power and better fuel economy, too
Fuel economy is expected to improve at least another 2 percent, making the 2011 F-Series Super Duty 6.7-liter Power Stroke diesel a full 20 percent more fuel efficient than the 2010 model. The improved torque and horsepower, for example, means a customer can get to a higher gear faster and stay in it longer, both of which aid fuel economy.

“Our testing procedure proved to us we could push the hardware a little harder,” said Brewer. “Again, we wanted to make absolutely sure our customers received an engine that was outstanding in all the key attributes: durability, reliability, power, performance and fuel economy.”

The increased performance will be evident in situations such as improved passing capability on the highway or when towing a heavy load up a steep grade. When towing, the increased engine torque will let the vehicle stay in high gear more often, reducing transmission shifting frequency and keeping engine speed low for better fuel economy and lower noise.

“Customers of the F-350 dual-rear-wheel configuration push their trucks to the limit and are the ultimate payload and towing users,” said Brewer. “And like with the diesel upgrades, we’ve found we can push the Super Duty even harder and bump up the ratings. The fact we have more torque and horsepower makes the job that much easier.”