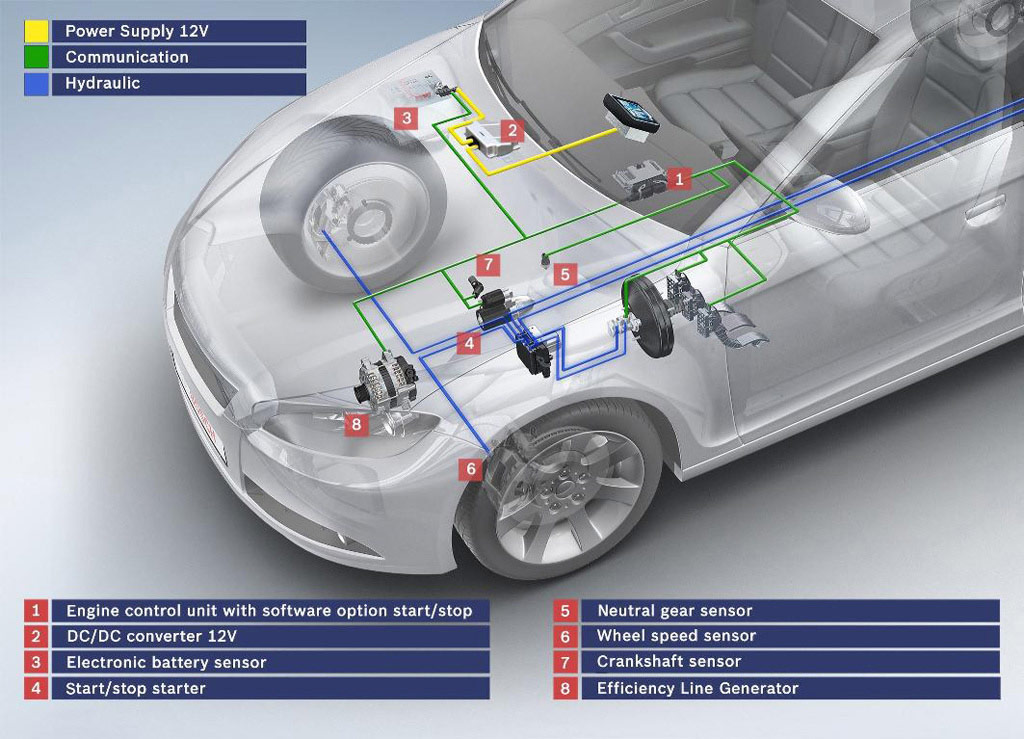 Bosch has already sold 1.5 million start/stop starters motors since they went into series production at the end of 2007. To date, they have mostly been used in vehicles with manual transmission. Together with automakers, Bosch has now modified start/stop technology so that it can also be used reliably in automatics – for example, in the Volkswagen Passat and in the Porsche Panamera with dual-clutch transmission; in the Fiat 500 in combination with an automated manual transmission; and in the Audi A8 with torque converter clutch. Bosch studies show that start/stop systems reduce fuel consumption and therefore CO2 emissions in the New European Driving Cycle (NEDC) by up to 5 percent, and in the NEDC urban segment by as much as 8 percent.

In vehicles featuring automatic transmission, the start/stop function is especially easy to use. The driver only has to step on the brake pedal, and as soon as the car has stopped the engine stops automatically – and it starts again when the brake pedal is released. This is very convenient for the driver, who only has to step on the accelerator and brake pedals. For engineers, however, it is also a challenge to make the start process faster and more dynamic, as the time for declutching, changing gear, and re-engaging the clutch is not available in an automatic vehicle. To solve this challenge, Bosch engineers adjusted the powerful electric motor, the starter’s quiet, enhanced pinion-engaging mechanism, and the injection system. Modifications to the control software were done in collaboration with automakers. The battery sensor, a DC-DC convertor, and a deep-cycle battery all remain unchanged in the system.

Start/stop systems, which largely use existing components such as the starter motor and engine control unit, can be quickly and cost-effectively adapted to different engines and vehicles, which is why this starter motor-based method has now become the system of choice for nearly all European automakers – with Bosch as the supplier of choice in most cases. Efficient generators that charge the battery as fast as possible are an ideal addition to start/stop systems, since they allow the start/stop function to be used more often. Bosch added Efficiency Line generators to its product line at the beginning of the year.

“Both technologies are elements of Bosch’s Efficiency Plus Solutions. Together, they enable fuel-consumption savings of up to 10 percent in urban traffic,” says Dr. Ulrich Kirschner, president of the Bosch Starter Motors and Generators division.