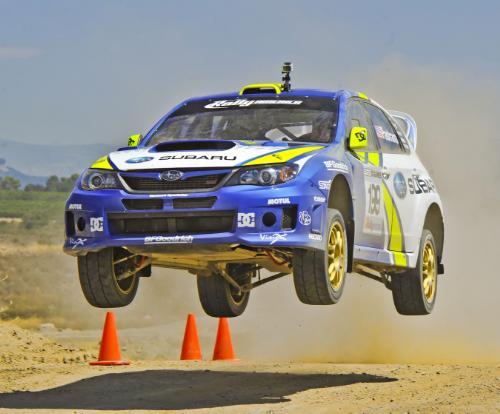 “The team has worked very hard to get these vehicles ready for the X Games,” said Pastrana. “The competition is going to be tough but I am confident that our STIs will be the cars to beat.”

The team’s technical partner, Vermont SportsCar, first began with a stock 2011 Subaru Impreza WRX STI right off the showroom floor. The car’s interior was then stripped bare and the shell lightened then fully seam welded for added strength. A multipoint roll cage, manufactured from T45 steel, was then welded into place.

The stock dampers are swapped out for heavy-duty rally dampers made by EXE-TC competition suspension. The rally dampers are fully adjustable and are built to take the abuse that off-road gravel rallying entails. Under the hood sits a 2.0-liter, 4-cylinder, turbocharged and intercooled STI engine running VP Racing fuel and producing in excess of 500 horsepower and 560 lb/ft of torque (running with 45mm restrictor for X Games). The clutch is a high performance-racing clutch provided by EXedy. Launch control, a turbo anti-lag system and a hydraulic handbrake are just a few of the features at the driver’s disposal.

A 5-speed, close-ratio dog-engagement gearbox is used, which allows Subaru Rally Team USA drivers to shift without depressing the clutch. The DCCD (Driver Controlled Center Differential) is similar to the system in a stock STI street car, but with a competition ECU for the differential, which allows for greater control of the torque delivery between all four wheels.

The exterior of the car remains close to stock, with the simple addition of mud flaps and a 1/4-inch aluminum skid plate. A roof-mounted carbon fiber air scoop aids in cooling the cockpit and the stock rear wing is replaced with a larger vertically slotted wing, which greatly improves down force to the rear of the car, even as it slides sideways. Lastly, auxiliary HID driving lights, made by Vision-X and housed in carbon fiber light pod, are fitted for night rallying.

“Learning a new car can be a challenge,” Isachsen said, “but having seen the result of the Subaru team’s preparations and practiced in my STI, I am very much looking forward to driving in the X Games SuperRally. Though the ERC (European Rally Championship) is somewhat different from SuperRally, I think my experience will place me in a competitive position for this event.”

The SRT USA will again compete in the Rally Car competition, which they have won 9 out of the 13 possible medals in the past 4 years. The event features two rally cars at a time running on a stadium based parallel course. New for this year X Games will debut SuperRally, which is based on the European Rallycross. SuperRally features direct head-to-head competition with four cars at a time on a tight dirt course within the massive LA Coliseum, in downtown Los Angeles. The new format should prove especially exciting for America fans as the rally cars will bump, jump and slide together in a furious sprint of just a few short laps.