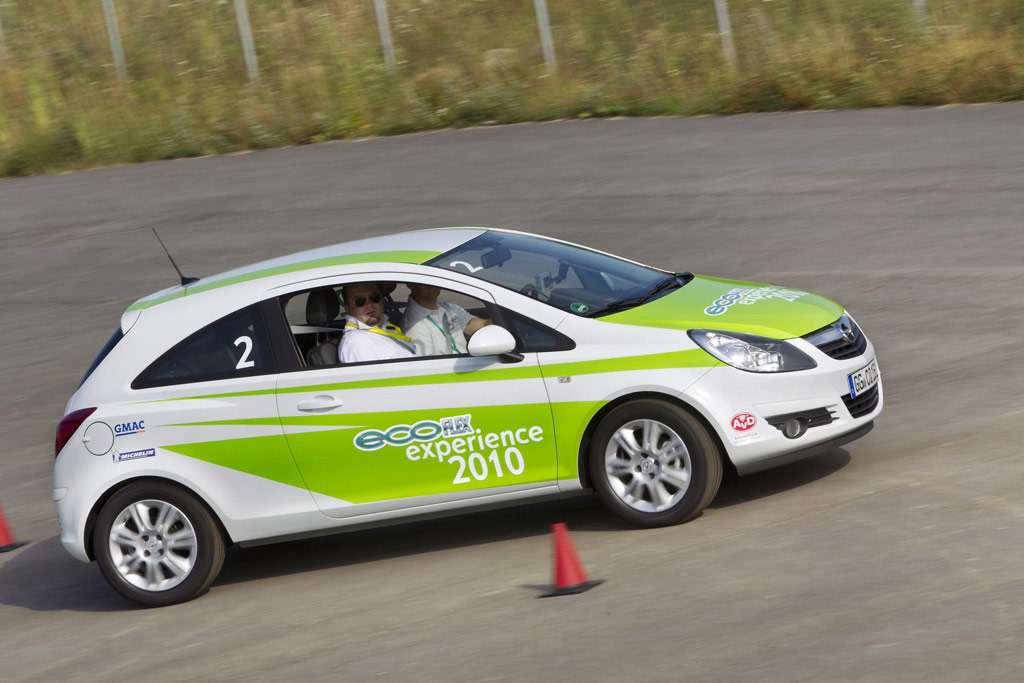 Opel first whittled down a playing field of nearly 70,000 competitors to 20 contestants – one from each participating country. They met this past weekend at Sturup Raceway near Malmö, Sweden for the grand finale. After two days of suspenseful action, the 25-year-old ecoFLEX Experience champion accepted a symbolic key for the grand prize, one of the very first electric Opel Ampera, which is on schedule for production next year. The extended-range electric vehicle – the first series car of its kind in Europe — will be on sale in Europe at the end of 2011.

“I definitely wanted to win because I wanted that Ampera,” said a proud and happy Gonçalves. “That’s why my main focus was to drive as consistently as possible.”

The second- and third-place winners also have reason to celebrate. The runner-up, fuel-saving champion Yakup Pelit from Denmark, won an Opel Astra 1.3 CDTI ecoFLEX. The 70 kW/95 hp compact car needs just 4.1 liters of diesel per 100 km, which results in exemplary CO2 emissions of 109 grams per kilometer.

Number three, the Finn Keijo Tapio Leppävuori, can show off his eco-friendly driving style in a Corsa 1.3 CDTI ecoFLEX that features an average consumption of only 3.7 liters per 100 km (98 g/km CO2).

Finale in Sweden highlighted of fuel-saving techniques
The participants had to demonstrate their fuel-saving abilities in four disciplines at the Swedish Sturup Raceway. The first was a typical city tour in the Corsa with a lot of starts, stops and varied speed limits. The overall winner of this event, Gonçalves, achieved an average consumption of 4.25 liters diesel per 100 km. Runner up Leppävuori burned 4.41 l/100 km and the third place winner, Urban Gostencnik of Slovenia used 4.56 l/100 km.

Smooth cruising against the clock was on the agenda with the top-of-the-line Insignia event, with Denmark’s Pelit averaging 4.31 l/100 km. Portugal’s Gonçalves took second place with 4.61 l/100 km, while Sweden’s Jesper Forsberg placed third with 4.68 l/100 km. The Meriva had only a half liter of diesel in its tank, and the best participant in this challenge, Forsberg successfully covered 18.13 km on this fuel ration.

With 1.6 liters of fuel in the Astra’s tank, the aim of the fourth race was to cover 20 laps as quickly as possible – a deed requiring particular skill in driving fast, but still being able to cross the finish line. The overall winner, Slovenia’s Gostencnik, managed this in just 43 minutes and 19 seconds. Second place was Pelit with 43”27’. Third place was Italy’s Fabio Bochicchio, clocking in at 43”30’.

At the end of the weekend, António Gonçalves found the best balance between fuel-saving techniques and a speedy driving style, with an overall consumption average of just 3.95 l/100 km. This put him ahead of the other country winners, proving that environmentally friendly driving can be fun – and profitable.

The overwhelming interest in the Opel/Vauxhall ecoFLEX Experience exceeded all expectations. In Germany alone, almost 19,000 people registered to participate, while in the UK, Turkey, France and Italy over 5,000 participants registered in each country. To date, the ecoFLEX Experience website has had around 2.5 million visits.